‘The attack rate is relatively high as there’s no immunity to it.’ Why coronavirus was never going to be just another flu

President Trump suspended all travel to the U.S. from Europe and declared a national emergency over COVID-19’s rapid spread 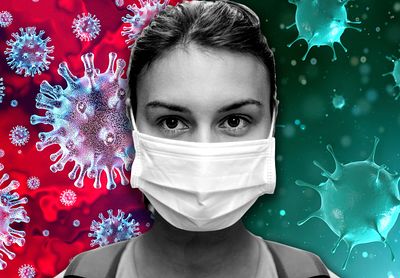 MarketWatch photo illustration/iStockphoto
Some cite influenza as a reason not to be worried about COVID-19, the disease caused by the novel coronavirus, but health professionals say that comparison misses some very important points.

Panicking about a global pandemic won’t help, experts say, but neither will denying the reality that novel coronavirus is a totally different disease from influenza, as could be its potential impact if the disease is allowed to spread.

Hundreds of thousands of people die from the flu every year, a fact some people have pointed out in an effort to quell anxiety about the coronavirus. So why are people social distancing for coronavirus if they don’t do it for the flu?

Conventional wisdom in the U.S. now holds that everyone should wash their hands for 20 seconds, elbow bump rather than shake hands, stop buying face masks so there are enough for health-care workers, note that airplane air is filtered 20 to 30 times an hour, and avoid cruise ships .

“Toilet paper is golden in an apocalypse,” one customer told MYNorthwest.com .

It may seem like a lifetime ago, given current declarations of “bearmageddon” as stock markets have swung wildly lower and higher, and the fact that the hospitality and airlines industry, among others, face their biggest financial crisis in a generation, but Trump wrote on Twitter /zigman2/quotes/203180645/composite TWTR +3.05% on March 9, “Last year 37,000 Americans died” from the flu. “Nothing is shut down, life & the economy go on,” he added. This week, the president said, “Nothing would be worse than declaring victory before victory is won.’

‘This is additive, not in place of. Yes, the flu kills thousands of people every year, but we’re going to have more deaths.’

As this dramatic change of heart illustrates, we still have a lot to learn about the novel coronavirus — and that alone, experts say, should be enough to motivate communities to work together to slow its progress. Studies suggest the differences between the flu and coronavirus are far starker than some people suggest.

In fact, health professionals point out important distinctions between COVID-19, the disease caused by the virus SARS-CoV-2, and other viruses. They don’t advise mass hysteria, obviously, but they also don’t believe that doing nothing and/or going about business as usual is a smart move.

Governments around the world are struggling to stop the spread of the pandemic. (An epidemic is a disease that infects regions or a community.) The “Spanish flu” from 1918 to 1919 and Black Death from 1347 to 1351 were two of the most extreme pandemics ever recorded.

Coronavirus had killed at least 3,170 people in the U.S. as of Tuesday, 914 of which were in New York City, according to data aggregated by Johns Hopkins University; there were 164,610 confirmed cases. New York State accounts for roughly 50% of the U.S. total, which accounts for 19.5% of the global total. Worldwide, there were 800,049 confirmed cases of the virus and 38,714 deaths.

Recommended: ‘It’s appalling to attach a dollar number to a human life — for noneconomists.’ How can you choose between saving the U.S. economy from coronavirus and saving lives?

So what are the differences between the new coronavirus and the flu? For starters, there is no vaccine for COVID-19, and one will likely take at least a year to develop and to get one to market. And, unlike with influenza viruses for which there are several vaccines, humans have not built up an immunity over multiple generations. What’s worse, doctors fear the virus will mutate.

Of course, there are similarities between influenza and COVID-19. Both viruses are untreatable with antibiotics, and they have almost identical symptoms — fever, coughing, night sweats, aching bones, tiredness and, in more severe cases of both viruses, nausea and even diarrhea in the most severe cases. They can both be spread through respiratory droplets from coughing and sneezing.

But doctors say their differences are just as varied. “It’s a little simple to think the novel coronavirus is just like flu,” Amesh Adalja, a senior scholar at the John Hopkins Center for Health Security and a spokesman for the Infectious Diseases Society of America, told MarketWatch.

“We don’t want another flu,” he said. “This is additive, not in place of. Yes, the flu kills thousands of people every year, but we’re going to have more deaths.”

Dispatches from the front lines of a pandemic: ‘They’ve likened it to a war where the number of casualties just keep on coming’: Italians find solidarity, resilience and music during the coronavirus lockdown

There are reported to be some 1 billion influenza infections worldwide each year, with up to 45 million cases in the U.S. per year, tens of thousands of U.S. deaths, and 291,000 to 646,000 deaths worldwide .

The seasonal flu has a fatality rate of less than 1%. Anthony Fauci, the director of the National Institute of Allergy and Infectious Diseases, estimates that the flu fatality rate is closer to 0.1%. But even accounting for the mild, yet undiagnosed cases of COVID-19, he said it would still make it “roughly 10 times more lethal than the seasonal flu.”

Another reason not to compare the two viruses: Influenza has likely been around for more than 2,000 years. “The flu has been with us since the birth of modern medicine,” said Adalja. Scientists say the “novel influenza A viruses” in humans lead to a pandemic approximately once every 40 years. But, again, flu vaccines exist.

Flu has likely been around for 2,000 years. This coronavirus is three months old and, as yet, there is no vaccine.

Hippocrates of Kos, the Greek physician who was born around 460 B.C., mentioned what we now know as the modern influenza virus in his writings, some historians say. He called it the “ Fever of Perinthus .” Others wonder whether this was flu, another illness, or a combination of illnesses.

“In 1173 and 1500, two other influenza outbreaks were described, though in scant detail. The name ‘influenza’ originated in the 15th century in Italy, from an epidemic attributed to the ‘influence of the stars,’” which, according to historical documents, “raged across Europe and perhaps in Asia and Africa,” a 2016 paper in the Journal of Preventive Medicine and Hygiene reported.

“Scholars and historians debate whether influenza was already present in the New World or whether it was carried by contaminated pigs transported on ships,” it added. “Some Aztec texts speak of a ’pestilential catarrh’ outbreak in 1450-1456 in an area now corresponding to Mexico, but these manuscripts are difficult to interpret correctly and this hypothesis seems controversial.”

What has all this got to do with COVID-19? There is an advantage to coming down with a virus that has been around for hundreds of years, if not a couple of thousand. Humans, ideally, will have built up more natural defenses to fight it.

Complicating matters: Influenza and COVID-19 come from different virus families, and COVID-19 is brand new. “There are four other strains of the coronavirus, but the attack rate of this virus is relatively high as there is no immunity to it,” Adalja said.

Dispatches from the front lines of a pandemic: ‘Aussies are a relaxed bunch, but this will test us all’: Australians flock to the beaches at the end of summer — and brace for the start of flu season

To put that in perspective: In 2017 to 2018, the worst flu season on record in the U.S. outside of a pandemic, approximately 80,000 Americans died. The four other coronavirus strains that already exist are responsible for around 25% of our common colds, Adalja added.

“But it doesn’t seem like there is cross-immunity with this coronavirus as there are with the other coronaviruses,” he added. In other words, the natural defense systems in our body that help us ward off flu are unlikely to apply here.

Luis Ostrosky, a member of the Infectious Diseases Society of America, said humans have a “herd immunity” to flu. “When there are enough people in the community who are immune, it protects people who are not immune,” he said. That is the case with flu, but not with COVID-19. Ostrosky said this is especially critical when there are no vaccines or therapeutic treatments for a virus.

“Both can be spread from person to person through droplets in the air from an infected person coughing, sneezing or talking,” wrote Lisa Maragakis , the senior director of infection prevention at Johns Hopkins Medicine in Baltimore. Based on the estimated distance that viruses travel, scientists recommend people stay at least six feet away from one another in enclosed public spaces.

In the meantime, the virus continues to spread, likely helped by younger, healthier people who have mild symptoms or who are asymptomatic passing it onto those in the higher-risk categories. Unlike coronavirus, according to the CDC , “Children younger than five years old — especially those younger than two — are at high risk of developing serious flu-related complications. Governments around the world are racing to stem the spread of COVID-19.”

In an interview on March 27 with Trevor Noah, host of “The Daily Show” on Comedy Central /zigman2/quotes/200340870/composite VIAC +0.29% , Fauci said, “Even though you are young, you are not absolutely invulnerable,” Fauci said. There are cases of young people in the 20s, 30s, 40s, requiring intensive care, “so if you think you’re completely invulnerable, you’re incorrect."

Dispatches from the front lines of a pandemic: ‘The lack of an all-island response has also rattled communities on both sides of the Irish border.’ Pubs close due to coronavirus, government issues new strict rules for funerals 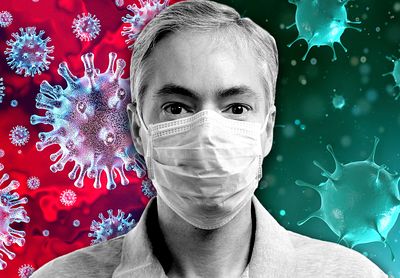 MarketWatch photo illustration/iStockphoto
Neither the flu nor COVID-19 viruses is treatable with antibiotics, and the two illnesses have roughly identical symptoms.

Estimates of coronavirus fatality rates vary, depending on the sample size, country, and source. The upshot is until testing is more widely available, it’s hard to know for sure. So what percentage of patients who test positive could die? The answer is, to say the lest, foggy. One thing most estimates agree on: it’s far higher than the flu. Estimates vary from 1% to 2%; some even higher.

COVID-19 rates may fall closer to those of the flu, assuming many more people are infected. JAMA released a paper earlier this month analyzing data from the Chinese Center for Disease Control and Prevention on 72,314 COVID-19 cases in mainland China last month, the largest such sample of this kind. The sample’s overall case-fatality rate was 2.3%, in line with the earlier estimates.

A study published by Nature earlier this month said the fatality rate was up to 1.4%, using a sample size of 48,557 as of Feb. 19, but the authors cautioned: “The precise fatality-risk estimates may not be generalizable to those outside the original epicenter, especially during subsequent phases of the epidemic.”

‘As coronavirus spreads it threatens to put a much greater burden on health systems than flu does.’

Coronavirus appears to be transmitted with ease to around 2.3 people by each person infected in the community, said Antigone Barton, the editor of ScienceSpeaks, a medical website. Drug companies and the medical community, she said, are scrambling to come up with a vaccine before more people die, and health services are overwhelmed with sick people showing up at their doors.

The potential demand for hospital beds, ventilators, masks and medications, and the pressure all of this would put on staff, worries her. “Because there’s no proven therapy or vaccine,” Barton said, “as coronavirus spreads, it threatens to put a much greater burden on health systems than flu does, and greater than most or many are prepared for.”

(This story was updated with new coronavirus data.)