12 firefighters injured in fiery blast; all expected to survive 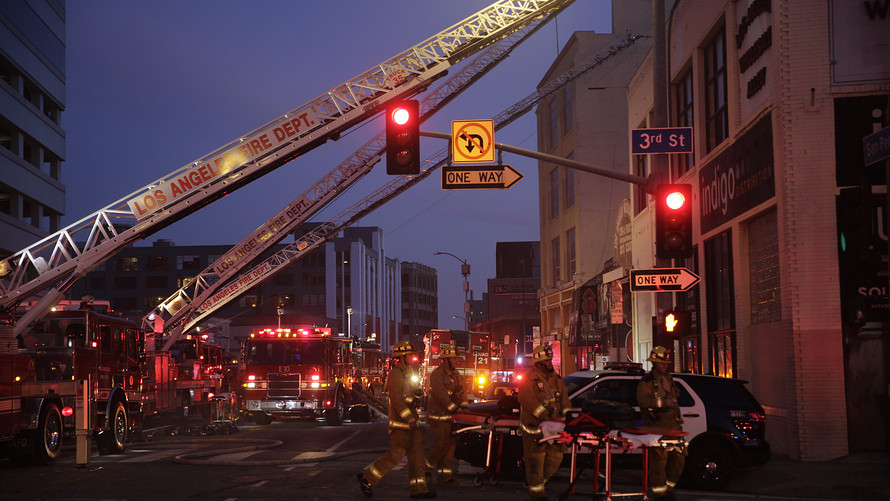 LOS ANGELES — Police and fire investigators launched a criminal probe Sunday into the cause of an explosion at a hash oil manufacturer in downtown Los Angeles that sent firefighters running for their lives.

Detectives from the Los Angeles Police Department’s major crimes division were working with the city Fire Department’s arson investigators to determine what might have sparked the blast that shot a ball of flames out of the building Saturday night and scorched a fire truck across the street, police spokesman Josh Rubenstein said.

“We’re in the very early stages of the investigation ... to understand what happened and figure out how to move forward,” he said.

The blast injured a dozen firefighters. Some of them who ran out onto sidewalks, where they tore off their burning protective equipment, including melted helmets, officials said.

“Everybody off the roof!” a firefighter shouted in scanner traffic captured on Broadcastify.com.

Firefighters first thought they were battling a routine structure fire, city fire Capt. Erik Scott told KNX Radio, but as they got a little farther in the building they started to hear “a loud hissing sound and a significant rumbling that you could feel vibrating throughout the area.”

He said “one significant explosion” shook the neighborhood around 6:30 p.m. Firefighters inside had to run through a wall of flames he estimated as 30 feet (9 meters) high and wide, and those on the roof scrambled down a ladder that was engulfed in flames.

Three firefighters were released after spending the night in the hospital, fire department spokesman Nicholas Prange said Sunday. Of the eight who remained hospitalized, two were in critical but stable condition, he said. Officials initially announced that 11 firefighters were injured. But Prange said a 12th was treated and released for a minor injury.

All were expected to survive.

There was light to moderate smoke when firefighters entered the one-story building in the city’s Toy District and went on the roof — normal procedures to try to quickly knock down any flames.

Los Angeles Fire Chief Ralph Terrazas said one of the firefighters inside the building thought things didn’t seem right — the pressure from the smoke and heat coming from the rear of the building were increasing. He directed everyone to get out, and they quickly started exiting the building as it was rocked by the explosion.

Firefighters on the roof scrambled down ladders with their protective coats on fire. The wall of flames shot out the building and burned seats inside a fire truck across the street.