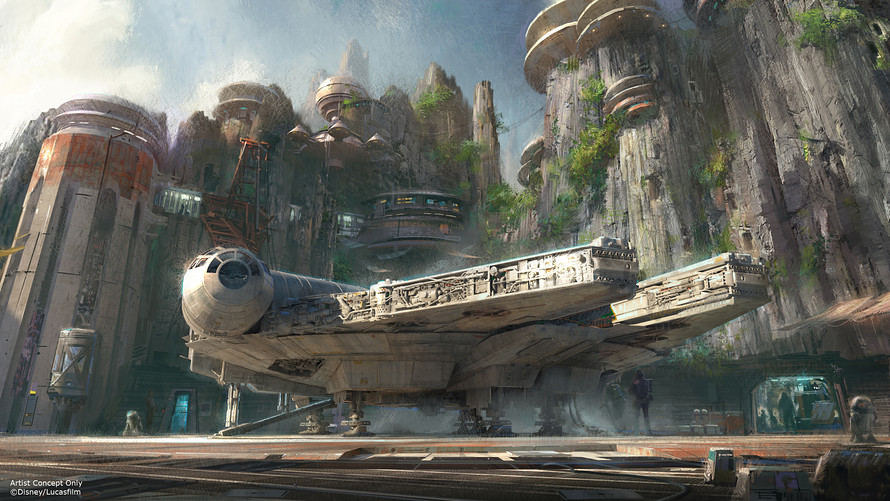 Disney Parks Via Getty Images
This illustration depicts a portion of the Star Wars-themed lands that will be coming to Disneyland park in Anaheim, Calif. and Disney's Hollywood Studios in Orlando, Fla., later this year.

The Walt Disney Co. /zigman2/quotes/203410047/composite DIS +0.58%  has set the opening dates for its new “Star Wars” attractions in Disneyland and Walt Disney World.

Star Wars: Galaxy’s Edge will open first at Disneyland Resort in California on May 31 of this year, matching with the expected timeline Disney had previously outlined, Disney CEO Bob Iger announced Thursday during the company’s annual shareholder meeting.

Don’t miss: The best ways to save your family money on Disneyland tickets

Much like the epic intergalactic film series the attractions are based on, the announcement came with two surprise twists, which seem to contradict each other.

Much like the epic intergalactic film series the attractions are based on, the announcement came with two surprise twists, which seem to contradict each other.

The version of this new land located at Disney’s Hollywood Studios theme park at Walt Disney World Resort in Florida is going to open much earlier than originally expected on Aug. 29 of this year. Disney previously planned to open the Walt Disney World iteration in the late fall or early winter.

“In light of tremendous demand, Disney made the decision to open the land in phases to allow guests to sooner enjoy the one-of-a-kind experiences that make Star Wars: Galaxy’s Edge so spectacular,” the company said in a blog post following the announcement.

Another twist, which actually means that part of the attractions could open later than expected. At both resorts, the opening of the new “Star Wars” attractions will occur in phases. Each of these lands is set to contain two new rides in addition to shops and restaurants styled after the imaginary worlds the public knows from the popular film series.

Phase one of the launch will include a bar/restaurant, Oga’s Cantina, and one of the two new rides planned for these areas, Millennium Falcon: Smugglers Run. The ride is designed to simulate the experience of flying on the spaceship famously piloted by Hans Solo (Harrison Ford) and Chewbacca.

At a later, yet-to-be-announced date, Disney will open the second section of each of the “Star Wars” lands, which will feature the other planned new ride, Star Wars: Rise of the Resistance. This ride is set to recreate a battle between the First Order and the Resistance, the warring factions depicted in the most recent entries to the “Star Wars” series.

Read more: Is the free food offer at Walt Disney World really worth it?

Tourists looking to visit either of the versions of Star Wars: Galaxy’s Edge will need to purchase valid theme park admission to enter. Those who plan to visit the Disneyland attractions, however, will also be required to make a no-cost reservation on Disneyland.com in advance to access the area, subject to availability. Guests staying at the three Disneyland Resort hotels will receive a designated reservation for Star Wars: Galaxy’s Edge during their stays.

‘Disneyland will already have far, far more demand than its infrastructure outside and inside the parks can handle.’

Disney currently does not plan to require a special reservation for the iteration set to open at Walt Disney World. Other details are forthcoming.

The choice to stagger the openings of the new “Star Wars” attractions could be beneficial to those looking to visit the theme parks to experience them, travel experts suggested.

“This will also help dilute crowds to some degree, as most non-locals will have to choose between attending the grand opening or waiting for both rides to open,” Tom Bricker, owner of DisneyTouristBlog.com, wrote . “It’s an interesting approach.”

Nevertheless, Bricker cautioned visitors to expect major crowds at both theme parks. In particular, the opening of the attractions at Disneyland will coincide with the typical summer crowds from Nevada and Utah, Bricker said. “Disneyland will already have far, far more demand than its infrastructure outside and inside the parks can handle,” Bricker said.