Dr. Fauci: ‘This is an outbreak of historic proportions, the likes of which we’ve not seen in 102 years’

The veteran immunologist said, ‘I think we’re facing a whole lot of trouble’ 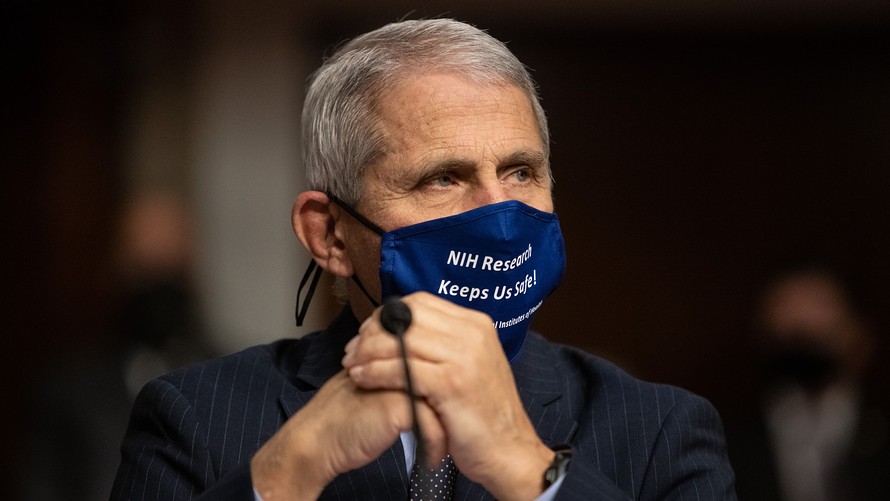 Winter is coming and so is the prospect of a “twindemic.”

Dr. Anthony Fauci, the director of the National Institute of Allergy and Infectious Diseases and an expert in infectious diseases for the last four decades, told CNBC’s Shepard Smith Monday evening that it was more critical than ever to do these five things: wear a mask, social distance, avoid crowded spaces, do things outdoors where possible, and wash your hands frequently.

“I think we’re facing a whole lot of trouble,” Fauci said. “We have a baseline of infections now that vary between 40,000 and 50,000 per day. That’s a bad place to be when you’re going into the cooler weather of the fall, and the colder weather of the winter. In addition, we would like to see the percent positivity be coming down.” More than 215,910 people in the U.S. have died from COVID-19.

Dr. Anthony Fauci, director of the National Institute of Allergy and Infectious Diseases

Public-health experts have also warned of a “twindemic” of COVID-19 and seasonal influenza as the U.S. enters flu season, and urged Americans to get their flu shots. They worry about hospitals being overwhelmed with coronavirus and influenza cases, and about people being not being able to distinguish their symptoms.

Smith asked Fauci about President Donald Trump’s call to Gov. Andrew Cuomo to open up New York. “This all-or-none phenomenon — either stay shut or you know, just throw caution to the wind — doesn’t work. And we’ve proven it doesn’t work,” Fauci said. “So that the prudent way and the careful way we know will, in fact, get us open, and we’ll do it in a safe way.”

When Smith said Fauci had been sidelined as a member of the White House task force on coronavirus, the doctor said he won’t give up. “This is an outbreak of historic proportions, the likes of which we have not seen in 102 years,” he said, referencing the 1918 flu. “There’s no chance that I’m going to give up on this and walk away from it no matter what has happened.”

Some 500 million people, or one-third of the world’s population, became infected with the 1918 Spanish flu. An estimated 50 million people died worldwide, with about 675,000 deaths occurring in the U.S., according to the Centers for Disease Control and Prevention. Both pandemics caused an economic contraction, reducing both gross domestic product and employment.

Though the 1918 pandemic is forever associated with Spain, this strain of H1N1 was discovered earlier in Germany, France, the U.K. and the U.S. But similar to the Communist Party’s response to the first cases of COVID-19 in China, World War I censorship buried or underplayed those reports. Multi-generational households were more at risk from the 1918 flu and coronavirus in 2020.

Fauci implored young people to act responsibly. A young person might not get sick, but they could spread the disease to someone vulnerable. “That can be someone’s grandfather, that can be a woman who’s on chemotherapy for breast cancer, that could be an immune-deficient child. So we’ve got to stop thinking that we exist in a vacuum, only for ourselves. We’re all in this together.”

Dr. Anthony Fauci, director of the National Institute of Allergy and Infectious Diseases

Last month, Fauci told the Wall Street Journal’s CEO Council in a remote interview that the first vaccines developed for COVID-19, the disease caused by SARS-CoV-2, could be moderately rather than highly effective. “If the vaccine is moderately effective, enough that you definitely want to use it, then you’re going to have to get a lot more people to get vaccinated,” he said.

“With the combination of a good vaccine along with public-health measures, we may be able to put this coronavirus outbreak behind us the way we put the original SARS behind us and, hopefully, in the way we put MERS, or the Middle East Respiratory System, behind us,” the veteran immunologist said.

Fauci has said that he’s hopeful that a coronavirus vaccine could be developed by early 2021, but has repeatedly said it’s unlikely that a vaccine will deliver 100% immunity; he said the best realistic outcome, based on other vaccines, would be 70% to 75% effective. The measles vaccine, he said, is among the most effective by providing 97% immunity.

As of Sunday, COVID-19 had infected 39.7 million people worldwide, a number that mostly does not account for asymptomatic cases, and killed more than 1.1 million people. The U.S. still has the world’s highest number of cases and deaths (8.1 million and 219,311 deaths), followed by India (7.5 million), Brazil (5.2 million) and Russia (1.4 million), according to Johns Hopkins University.

The president’s recent convention address appeared to somewhat accelerate the timeline laid out by “Operation Warp Speed,” his administration’s effort to financially support the rapid development, manufacturing and distribution of COVID-19 vaccines, therapeutics and diagnostics. Under that program, the administration says it aims to have initial vaccine doses available by January. “I’m not going to walk away from this outbreak no matter who the president is,” Fauci told Smith.