Echoes of the Great Depression? U.S. economy could post biggest contraction ever 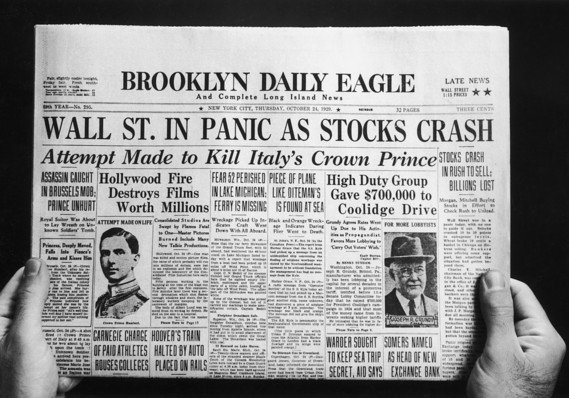 Getty
The front page of the Brooklyn Daily Eagle newspaper published on the day of the initial Wall Street Crash of 'Black Thursday', 24th October 1929.

The deepening coronavirus crisis is increasingly likely to hit the U.S. economy harder than at any time since the early stages of the Great Depression some 90 year ago.

With many industries partly or even completely shutting down, the U.S. could post the biggest economic contraction since the government began keeping quarterly records shortly after World War Two.

The devastation could even rival some of the worst stretches in the early 1930s, when the whole world entered a prolonged slump. The U.S. economy shrank by an astonishing 13% in 1932 (the U.S. has annual GDP estimates for the 1930s).

“The United States is facing what could become the most serious economic crisis since the Great Depression of the 1930s,” contended Rep. Don Beyer, a Democrat from Virginia who is vice chairman of the Joint Economic Committee in Congress.

Wall Street forecasters have been slashing their estimates frenetically as the damage mounts. JP Morgan is the most pessimistic, predicting a stunning 14% annualized decline in gross domestic product in the three-month period running from April to June.

How bad is that?

The biggest recorded quarterly decline in modern U.S. history was 10% in the first three months of 1958 during a short, but steep recession. Some 2 million people lost their jobs in less than a year.

Not far behind JP Morgan is Deutsche Bank, which predicts the economy will shrink 13% in the second quarter.

Oxford Economics puts the decline at 12% and the loss of 1 million jobs. Capital Economics sees a 10% decline in GDP, TS Lombard 8.4% and Nationwide 8%.

Economists are split on when the economy will start to rebound, but hardly any share the bullish talk of the Trump White House. President Trump vowed on Thursday the economy would take off like a “rocket” once the spread of the virus is under control.

His Treasury Secretary, Steven Mnuchin, also predicted on Thursday the economy will roar back with a “gigantic” fourth quarter, saying “we are going to kill this virus” and return to a “normal world.”

The Trump administration is primed to pump more than $1 trillion in aid to businesses and consumers to try to help the economy weather the storm. Sales are plunging, layoffs are surging and the Dow Jones Industrial Average /zigman2/quotes/210598065/realtime DJIA +0.93%  has lost one-third of its value in just three weeks.

Deutsche Bank is among the more optimistic Wall Street forecasters, saying U.S. growth could rebound by 5% in the final six months of the year. Yet the firm hedged its bets by noting the unprecedented nature of the crisis.

Other forecasters such as chief economist Steve Blitz of TS Lombard expect the economy to continue to shrink during the summer before a slow recovery gets underway.

“No set of government programs can ... cover losses 100%, no matter how far-reaching,” Blitz said.