On the heels of one of the worst years in stock-market history, some experts say investors should shift more money into a surprising area: emerging markets.

For years, shares and bonds from emerging markets made investors wary. Sure, their growth often could be much stronger than that of developed economies, partly because of robust population growth and steadily improving standards of living. But countries such as Brazil, Mexico, China, South Korea and many in Africa often were handicapped by heavy debt, weak currencies, poor corporate governance and high volatility. 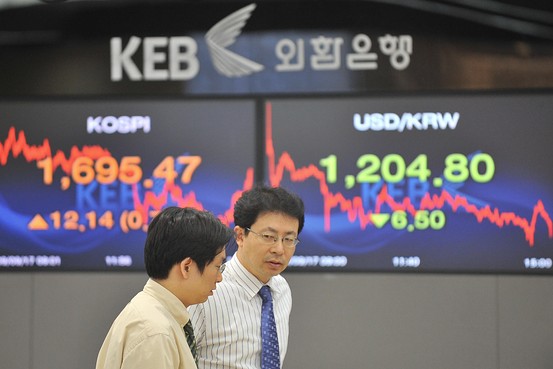 That view is changing. Last year's financial meltdown raised questions about the attractiveness of developed nations, which have been dealing with their own serious debt, currency and governance issues.

And with few analysts predicting robust growth in developed markets for some time, there's a new appreciation for the promise of robust expansion in some emerging markets.

Daniel Arbess, manager of the Xerion Fund, a hedge fund, at Perella Weinberg Partners, says that "emerging markets are arguably the single most important avatar of investment opportunity for our generation. The demand for commodities to support the modernization and urbanization of developing economies, and the demand for food and products by growing consumer classes, should continue to fuel opportunities for years to come."

Some stock markets in developing nations, including Brazil, already have soared from their lows reached earlier this year. The widely followed MSCI Emerging Market index, which tracks emerging-markets shares, is up 60% this year, compared with a gain of 10% for the Dow Jones Industrial Average. (The Dow fell 1.6% last week.)

On a price-to-earnings basis, however, shares of many emerging-markets companies are comparable to those in developed regions, says Marko Dimitrijevic, a hedge-fund manager who focuses on emerging markets. On a price-to-sales basis, they're still a bit pricey, however, according to some investors and analysts.

Profits of companies in emerging markets "are growing faster than developed markets, yet often still trade at a discount" based on their strong growth and reasonable P/E ratios, says Mr. Dimitrijevic, who runs Everest Capital, a top-performing fund based in Miami.

He's a fan of India, Korea, Nigeria and the Middle East region; he's less keen on Mexico and China, which are more expensive.

Nations outside of the U.S. and developed Europe now account for almost half of global gross domestic product, Mr. Dimitrijevic says. It was less than 40% in 1990. It helps that many of these nations are transitioning from dependence on demand from developed nations to a more balanced exposure to both local and foreign demand.

And while nations with emerging markets once were criticized for excessive government involvement, the rush by the U.S. and other nations to rescue companies and rack up debt to spur economic growth has taken the air out of that argument.

Dangers still loom for investors focused on emerging markets, though. Accounting standards in some countries aren't up to par, disclosure can be less robust, and the size of some markets in Africa and elsewhere can be small.

Some doubt the ability of emerging markets to buck the likely slow growth of the developed world.

"If your world view is that the recession is over and we are about to start a great bull market, then emerging markets should outperform," says Matthew Tuttle, who runs investment advisory firm Tuttle Wealth Management. "If you believe, as we do, that we are in for a double dip [another downturn for the economy] and things will get worse before they get better, then emerging markets will not be a good place to be."

Mr. Tuttle agrees that nations like Brazil, Russia, India and China should do well over the long haul. But he worries that these stock markets have gained between 50% and 100% this year, saying that "those types of numbers aren't sustainable…. I would wait for some sort of pullback."

Analysts say bonds from many emerging-markets nations are less attractive than stock because so many of these countries now are rated investment grade. So investors are no longer being compensated for the risks of going abroad.

Individual investors can find it difficult to buy debt from companies in emerging markets -- and some small companies can be harder to track.

Exchange-traded funds like the iShares MSCI Emerging Markets Index Fund /zigman2/quotes/201454250/composite EEM -1.79% track the MSCI index, providing exposure to Brazil, China and other markets, though not to smaller markets. It's up more than 50% so far this year.

Write to Gregory Zuckerman at gregory.zuckerman@wsj.com