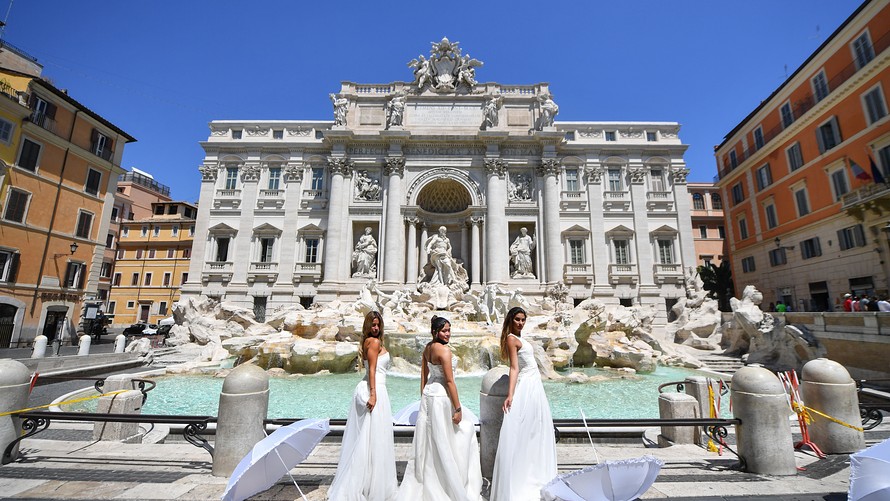 AFP via Getty Images
Brides wearing their wedding dresses hold a flashmob protest against the postponement of their marriages due to the strict protocol on all religious ceremonies during the coronavirus pandemic, on June 7, 2020, by the Trevi Fountain in Rome, Italy.

European stocks were headed for a weekly loss, amid continued concerns over the spread of coronavirus in the U.S. and fresh outbreaks elsewhere in the world, though equities attempted to push higher on Friday.

U.S. stock futures were modestly lower, with those for the Dow Jones Industrial Average (CBT:YM00)  down 68 points. The Dow (DOW:DJIA)  dropped over 300 points on Thursday, with the S&P 500 (S&P:SPX)  also closing lower, though the Nasdaq Composite (NASDAQ:COMP)  resumed an advance with a 0.5% again.

Coronavirus concerns dominated after the U.S. saw its sixth daily record for coronavirus cases in 10 days on Thursday, with fatalities also rising in some states. “The closure of schools in Hong Kong and the further tightening of virus restrictions in Australia has also fed into the underlying negative mood at the end of the week,” said Michael Hewson, chief market analyst at CMC Markets, in a note to clients.

Asian markets fell, reflecting fears any global economic recovery may stall out amid those climbing cases, with Tokyo also reporting an increase in infections. The China CSI 300 index (CHINA:XX:000300)  halted an eight-session winning streak, with a loss of 1.8%. The index has climbed 14% this month, driven in part by articles in government-backed newspapers cheering on the market. That has raised questions over whether China’s latest rally will collapse on itself like it did in 2015.

Some economic cheer came from Italy, which said May industrial production jumped 42.1%, while France also saw that its production rebounded strongly. The U.K. has announced it will allow the reopenings of gyms, tattoo parlors, and swimming pools.

Still, investors are increasingly facing up to the fact that “any economic recovery is unlikely to be V-shaped in nature, with a range of companies starting to announce thousands of job losses this week,” said Hewson.

“This month alone we’ve seen John Lewis, Boots, Burger King, Rolls-Royce, Airbus, Upper Crust, and Harrods, to name but a few, announce thousands of job losses, in addition to the cuts announced last month from the major airlines, energy and car companies which has pushed the total of jobs at risk up to well over 100,000,” he said.

Investors will begin to hear how companies have been holding up during COVID-19, with next week marking the start of second-quarter earnings season.

A recovery for shares of oil companies helped Europe turn positive. Crude prices (NYM:CL.1)  remained weak, but shares of BP (NYS:BP)   (LON:UK:BP)  and Royal Dutch Shell Group (NYS:RDS.A)   (LON:UK:RDSA)  rose around 0.5% each from a 1% drop earlier. The International Energy Agency boosted its forecast for 2020 oil demand, but also warned that the pandemic could hamper that view, Reuters reported .