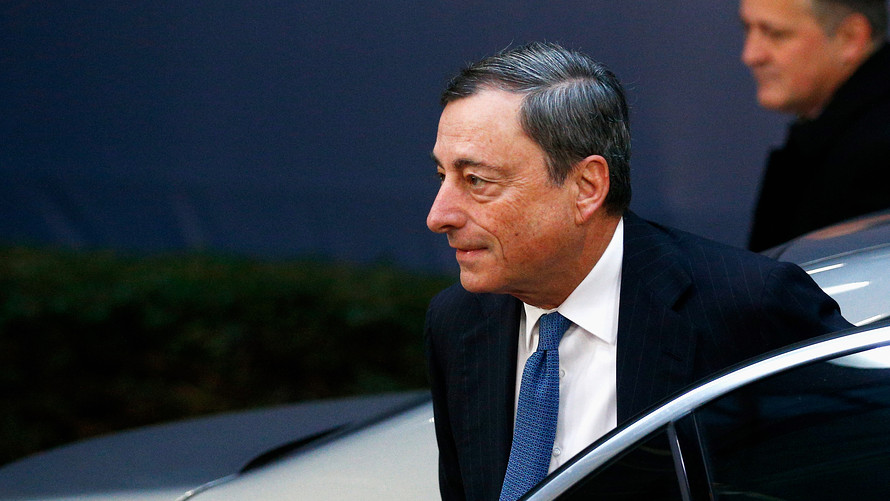 European stocks closed at their lowest in a week Thursday, with bank shares in the red, and they struggled throughout the session even after data showed eurozone business activity revved up this month.

The euro turned lower in the wake of the European Central Bank issuing updated inflation targets as policy makers wrapped up for the year.

How markets moved: The Stoxx Europe 600 index (STOXX:XX:SXXP) fell 0.5% to 388.91, the weakest close since Dec. 7, according to FactSet data. No sector rose, and losses were led by the utility and consumer-goods groups. On Wednesday, the benchmark slipped 0.2%.

In the bond market, the yield on Germany’s 10-year government bond (XTUP:BX:TMBMKDE-10Y) turned lower as prices rose. The yield fell less than 1 basis points to 0.304%, according to Tradeweb.

And check out: What European stock-market sector looks good in 2018?

What moved markets: The European Central Bank left its monetary policy unchanged, as widely anticipated. The euro began to drop following inflation projections from the ECB’s staff, as well as on renewed dollar strength.

The ECB’s 2020 inflation forecast of 1.7% was slightly behind some expectations of 1.8%, which could have suggested the bank would raised interest rates in the first half of 2019.

The euro earlier Thursday had extended gains from Wednesday after figures showed strong factory output and an upturn in the services sector bolstered business activity in the eurozone in December.

Also Thursday, the Bank of England held its key rate at 0.5%, as expected. The Swiss National Bank left its deposit rate at minus 0.75%, and Norges Bank stood pat as well, but said it expects to lift rates “somewhat earlier” than it had expected in September.

“As a result, the euro dropped sharply lower versus the dollar, breaking through $1.18. With few catalysts now until the end of the week, the euro could break through support at $1.1765 before dropping to $1.1740.”

Brexit in Brussels: Brexit was a major focus after U.K. Prime Minister Theresa May’s government late Wednesday was defeated in a key parliamentary vote on legislation for the U.K. divorce from the EU.

The setback for the government came just as EU leaders—including May—were meeting in Brussels through Friday for a summit where Brexit will be high on the agenda. The group is expected to give the green light for divorce talks to move onto the second phase.

The U.K.’s lower house voted to amend the Brexit bill to give members of parliament the power to reject the final divorce deal struck with Brussels. The government had warned that the measure could jeopardize a smooth exit from the EU in March 2019.

The vote—which was an amendment to May’s flagship Brexit bill—came after a rebellion of 11 members of her own Conservative Party, and is seen as a potential route to a softer Brexit.

Stock movers: Capita PLC (LON:UK:CPI)  tumbled 12.6% as the London-based business and outsourcing services company said its bid pipeline is currently valued at £2.5 billion, but that the bids are unlikely to add to profit in 2018 if successful.

Steinhoff International Holdings NV (FRA:DE:SNH)  slid 13% after the owner of Poundland and Mattress Firm said it would restate its 2016 financial results as part of its scrutiny into its European segment’s 2017 balance sheet assets.

Sky PLC   fell 1.8% after the broadcaster’s largest shareholder, 21st Century Fox Inc. (NAS:FOXA) , agreed to sell most of its assets to Walt Disney Co. (NYS:DIS)  in a deal that valued at about $52.4 billion.

Of the Stoxx 600, Lonmin PLC  soared 20% after the platinum producer agreed to be purchased by South Africa’s Sibanye-Stillwater .

Economic data: IHS Markit said its December flash composite purchasing managers index for the eurozone came in at 58.0, the highest since February 2011, led by continued improvement in France. The manufacturing PMI rose to a record of 60.6.

Black Friday events helped push U.K. retail sales up by 1.1% in November, well above the 0.4% increase expected in a FactSet survey of analysts.