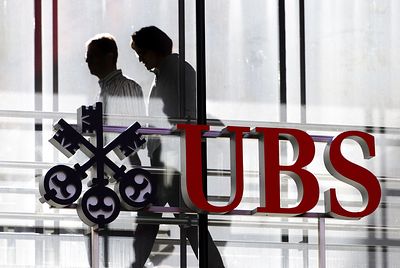 AFP/Getty Images
Employees walk past a logo of the Swiss banking giant UBS in Zurich. UBS said Monday it swung to a quarterly loss.

Europeans stocks pushed higher Monday, with Spanish and Greek shares gaining in the wake of sovereign ratings upgrades and closing at a 5-month and almost three-year highs, respectively.

What’s driving markets: Benchmark indexes in Spain and Greece were standouts as investors rewarded ratings upgrades for the countries, issued late Friday. Spain’s credit rating was raised by Fitch Ratings, which cited the country’s “strong, relatively broad-based, economic recovery” as reason for the upgrade to A- from BBB+. The last time Spain held a Fitch rating in the “A” level was in 2012.

Greece’s rating at S&P Global Ratings was raised to B from B-, with a positive outlook. “The upgrade reflects Greece’s steadily improving general government finances and its gradually recovering economic prospects,” wrote S&P. “Still, the size of Greece’s general government debt is an important ratings constraint,” it added.

Meanwhile, politics remained firmly in the spotlight as investors also juggled a fresh round of corporate financial updates, including M&A news. The euro advanced against the U.S. dollar as the U.S. government remained in shutdown mode. Saturday’s closure came after the Republican-led Senate late Friday couldn’t reach a deal over immigration issues.

Euro strength can hurt sales of products made by European exporters and hurt shares of those companies.

The euro had been choppy earlier after members of Germany’s center-left Social Democratic Party on Sunday voted to formally begin coalition talks with German Chancellor Angela Merkel’s conservative party. Merkel has been trying to craft a ruling coalition since September’s election.

On tap this week is the European Central Bank’s meeting on Thursday. The euro in recent sessions has been kicked up to 3-year highs versus the greenback on the prospect the central bank will soon shift to a hawkish tone toward its ultraloose monetary policy.

Read: BOJ and ECB expectations have trader hopes riding high for the yen and the euro

What strategists are saying: “Given that only 56% of the SPD’s voted in favor of the talks, the rejection of a final coalition deal remains a risk that’s likely to keep the euro capped for now,” said Hussein Sayed, chief market strategist at FXTM, in a note.

“The pressure on Democratic and Republican leaders to end the standoff is intense, so market participants are watching for any sign [of] cracks in Democrats’ resolve on immigration status for ‘Dreamers’. The deal on the table is only a ‘stopgap’ though. It will fund spending till early February. That means a breakthrough could be treated as hollow by markets,” said Ken Odeluga, market analyst, at City Index, in a note.