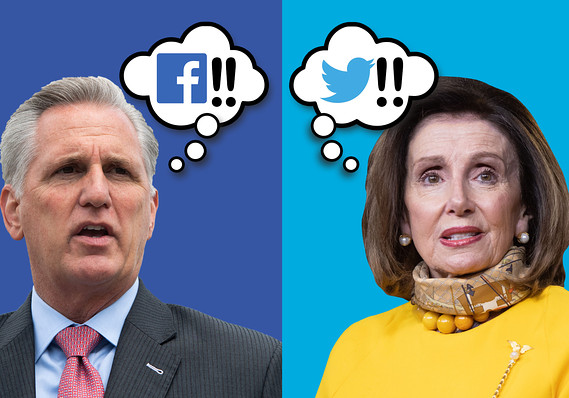 Party leaders in the House on Thursday added a new pair to the constellation of classic brand rivalries like Coke vs. Pepsi, Ford vs. Chevy and iOS vs. Android: Twitter vs. Facebook.

In the debate over whether social-media giants should try to filter out false or objectionable information disseminated via their platforms, House Speaker Nancy Pelosi, a California Democrat, on Thursday took Twitter’s /zigman2/quotes/203180645/composite TWTR +1.94% corner, praising its decision to label some of President Donald Trump’s tweets as questionable.

No company wants to be seen as being aligned with only with one party, and Silicon Valley in general was slow to get into the lobbying game in Washington. But if social-media preferences become another front in the country’s ongoing politico-culture wars, Silicon Valley may have little choice but to ramp things up, according to one Capitol Hill veteran.

“After the latest back and forth, Big Tech was already facing a rocky road ahead on Capitol Hill, but now it’s going to get much worse,” said Jim Manley, a former spokesman for former Senate Majority Leader Harry Reid, a Democrat. “They can try to buy their way out of this mess by throwing campaign cash around, but they are rapidly losing friends on Capitol Hill.”

Pelosi objected to the idea of lifting the legal protections for moderation but also expressed exasperation at the social-media companies. “I think it’s outrageous, but it’s an outrageous situation,” Pelosi said at her weekly press conference.

She praised Twitter for moving to put disclaimers on Trump’s tweets regarding mail-in voting but said it had not gone far enough.

She referred to a series of tweets in recent weeks by Trump where he tied former Republican congressman–turned–TV host Joe Scarborough to the death of an intern almost 20 years ago.

On May 12, Trump tweeted, “When will they open a Cold Case on the Psycho Joe Scarborough matter in Florida. Did he get away with murder? Some people think so.”

He has since posted variations on that tweet. Trump has pointed to no evidence for his accusation.

Right-wing talk radio personality Rush Limbaugh said Trump was exhibiting cleverness and subtlety in trafficking in this and other conspiracy theories without explicitly staking out a position on their veracity. “Trump never says that he believes these conspiracy theories that he touts,” Limbaugh said on his show, as the Daily Beast reported . “He’s simply passing them on.”