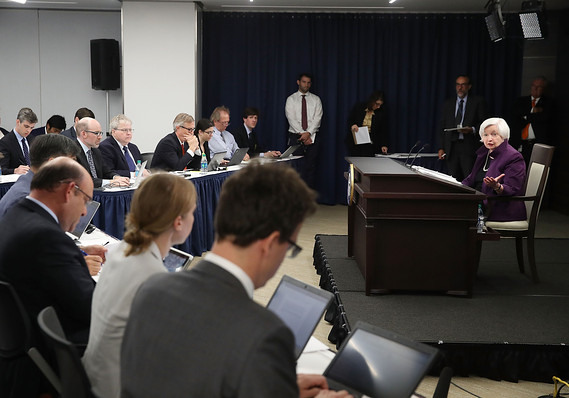 WASHINGTON (MarketWatch) — The Federal Reserve left the door open a crack for keeping interest rates unchanged until the end of year amid nagging doubts about the persistence of low inflation.

Minutes of the Fed’s two-day meeting that ended Nov. 1 show the bank is still on track to raise interest rates soon , but the Fed used somewhat more ambiguous language than it did in September.

“Many” Fed policymakers viewed an increase in the benchmark short-term rate as “warranted in the near term,” the minutes said. By contrast Fed officials in September agreed that a rate hike was likely “later this year.”

The subtle shift in the Fed’s tone stems from growing questions among senior officials about the low level of inflation despite a surging economy and the tightest labor market in more than a decade and a half.

The 12-month rate of inflation based on the Fed’s preferred PCE index stands at 1.6%, below the bank’s 2% target. The measure is an even weaker 1.3% if food and energy are stripped out.

Although most Fed officials still think inflation has been held down by temporary factors that will soon fade, they are less certain than they were just several months ago.

Low inflation “might reflect not only transitory factors, but also the influence of developments that could prove more persistent,” the minutes showed. “Many participants observed that there was some likelihood that inflation might remain below 2% for longer than they currently expected.”

Some Fed members even took the extraordinary step of suggesting the central bank’s own actions or public statements over the past few years might be partly to blame for fostering a decline in long-term inflation expectations.

“On the inflation front, there was clearly concern among policymakers,” said senior economist Jennifer Lee at BMO Capital Markets.

Despite these nagging doubts the Fed still appears on the cusp of raise interest rates again soon.

Inflation worries aside, officials were quite pleased with the economy. They noted resilient growth despite a spate of devastating hurricanes in the early fall and saw improvement in most sectors of the economy.

Yet taking note of a soaring stock market, several members worried that keeping interest rates too low could create a financial bubble. And some saw a higher risk of wage-related inflation from a booming jobs market whose pace of hiring they viewed as unsustainable.

Against that backdrop Wall Street widely believes the central bank will raise the benchmark fed funds rate, now between 1% and 1.25%, by a quarter-point at the last meeting of the year on Dec. 12-13.

The big question now is whether the Fed will stick to three planned rate increases in 2018 if inflation remains low.

Until very recently most senior Fed officials, including Yellen, were expecting inflation to move swiftly toward the bank’s 2% target. Now even Yellen is having second thoughts.

In an event at New York University, Yellen on Tuesday acknowledged the recent string of weak inflation readings were a surprise.

“There may be something more endemic and long-lasting in this that might be worth paying attention to,” she said.

Some of her colleagues say the Fed should wait to see if inflation rises before pulling the trigger on more rate increases in 2018. The central bank has previously signaled three rate hikes next year, but the Fed will revise its forecast at the December meeting.

What’s adding another dose of uncertainty is a big makeover in the Fed’s interest-rate setting board known as the Federal Open Market Committee. Yellen herself will leave the Fed as soon as the Senate confirms her replacement, fellow board member Jerome Powell.