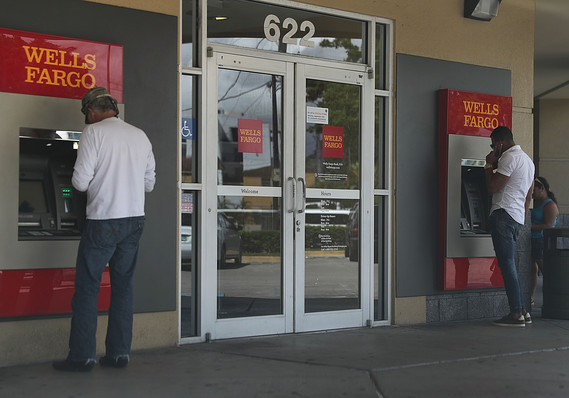 Getty Images
Customers use a Wells Fargo ATM at one of their bank branches in Miami.

The Federal Reserve on Friday announced it was forcing Wells Fargo to oust board members and limit its growth , responding to a wave of abuses at the San Francisco giant that include opening accounts for customers who didn’t request them.

In the last major move of Chairwoman Janet Yellen’s reign at the central bank, the Fed said it won’t let Wells Fargo /zigman2/quotes/203790192/composite WFC +0.74%   add assets beyond the level of the end of 2017 until it improves governance and controls. Wells Fargo ended 2017 with $1.95 trillion in assets.

Wells Fargo will be able to continue current activities including accepting customer deposits or making consumer loans, the Fed said.

“We cannot tolerate pervasive and persistent misconduct at any bank and the consumers harmed by Wells Fargo expect that robust and comprehensive reforms will be put in place to make certain that the abuses do not occur again,” Yellen said in a statement. “The enforcement action we are taking today will ensure that Wells Fargo will not expand until it is able to do so safely and with the protections needed to manage all of its risks and protect its customers.”

The asset cap is unprecedented, according to Federal Reserve officials.

The Fed cited not only the millions of customer accounts Wells Fargo opened without authorization but also more recent revelations that the bank charged hundreds of thousands of borrowers for unneeded guaranteed auto protection or collateral protection insurance for their automobiles.

Wells Fargo will replace three current board members by April and a fourth board member by the end of the year, the Fed said. Sen. Elizabeth Warren, the Massachusetts Democrat, had requested the Fed oust Wells Fargo board members, and celebrated the move in a statement. “Fines alone will never rein in fraudulent behavior at the big banks and by pushing out board members at Wells Fargo, Chair Yellen sends a strong message,” she said.

The Fed didn’t identify which board members will have to leave.

The Fed also singled out Stephen Sanger, the former lead independent director, and former CEO John Stumpf with letters excoriating them for the abuses.

Federal Reserve officials didn’t say it was specifically planned for Yellen’s last day — and they said the bank agreed to the terms on Friday afternoon.

The bank’s CEO, Timothy Sloan, said it’s committed to meeting the Fed’s concerns. “It is important to note that the consent order is not related to any new matters, but to prior issues where we have already made significant progress. We appreciate the Federal Reserve’s acknowledgment of our actions to date,” he said in a statement.

Read: Wells Fargo says profit may be hit by as much as $400 million from Fed sanctions

The vote for the sanctions was 3-0, with the incoming chairman, Jerome Powell, joining Yellen and Gov. Lael Brainard. The new vice chairman for regulation, Randal Quarles, abstained.

Quarles previously said he would recuse himself from Wells Fargo matters because he and his family previously had a financial interest in the bank.