WASHINGTON (MarketWatch) — The Federal Reserve stands ready to act to protect the financial system and the economy in the event that stresses from the European crisis escalate, Fed Chairman Ben Bernanke said Thursday.

“The situation in Europe poses significant risks to the U.S. financial system and economy and must be monitored closely,” Bernanke said in testimony prepared for delivery to the Joint Economic Committee of Congress.

He called on European leaders to do much more to stem the crisis.

The Fed chief’s testimony was largely in line with expectations. Central-bank watchers did not expect Bernanke to show his hands about what the Fed might do at its next policy meeting June 19 and 20.

“Based on these comments, we do not believe the FOMC has made up its mind about the need for further stimulus,” said Michael Gapen, a senior U.S. economist at Barclays Capital.

Stocks jumped in early trading, but lost some steam as Bernanke testified. Read more about the day’s action in Market Snapshot.

There was zigzag trading in the bond market. Treasury prices  eventually recovered, pushing yields down slightly.

Financial-market stress due to Europe and concerns about the loss of momentum in the U.S. economy have raised expectations that the Fed would do more to stimulate the economy.

On Wednesday, several key Fed officials said they were open to more easing if warranted.

In his discussion of the domestic economy, Bernanke stuck to his April forecast that growth will continue at a moderate pace. He said the recovery had been bolstered by consumer spending, as consumers had more money to spend given the drop in gasoline prices.

Business caution continued to restrain the economy, he noted.

Bernanke suggested some of the apparent slowing in economic data, including last Friday’s weak jobs number, might be due to unusually warm weather this past winter, which may have brought forward some activity. 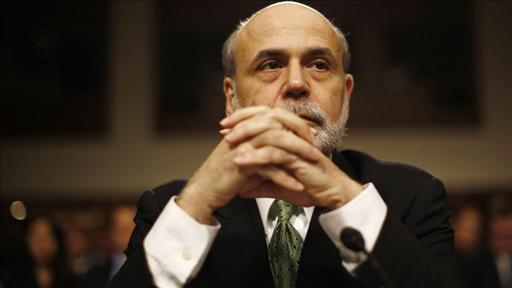 There have been a few encouraging signs in the housing market, according to Bernanke.

The Fed’s ultralow interest-rate policy is justified given high unemployment, subdued inflation and “the presence of significant downside risks,” he said.

Bernanke also again called on Congress to set in place a sustainable fiscal policy. He said the severe fiscal tightening that will occur at the beginning of next year unless Congress acts — the so-called ‘fiscal cliff’ — would pose “a significant threat to the recovery” if allowed to occur.

Bernanke said the key question at the Fed’s June policy meeting will be whether growth will be strong enough to bring down the unemployment rate. “The key question … [is] will economic growth be sufficient to achieve continued progress in the labor market.”

Payroll growth averaged 225,000 per month in the first quarter, but has slowed to a disappointing average of 75,000 in April and May. The jobless rate ticked up to 8.2% in May.

Earlier this year, the Fed chairman suggested that the strong job market seen at the turn of the year could be a “catch-up” in hiring after businesses slashed payrolls during and just after the recession.

The poor job growth in April and May may indicate that the catch-up is completed, Bernanke said. If so, “more rapid gains in economic activity will be required to achieve significant further improvement in labor-market conditions.”

Greg Robb is a senior reporter for MarketWatch in Washington.