For stocks, take your foot off the pedal before the election 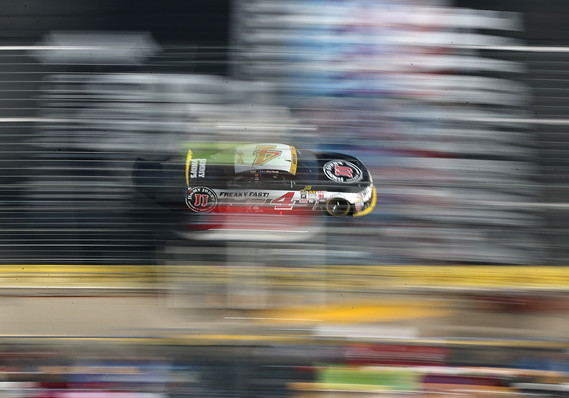 The seasonally weaker six months of the year is coming to an end just three weeks from now. September, normally the worst month of the year, didn't turn out all that bad. This is constructive (and positive) when looking at the market today. October is a month of heightened volatility, especially in an election year (let alone one with candidates as divisive as the two "headliners" we have to choose from this year), but with these typically "weak" months of the year looking more and more like they're going to end in positive territory, I wouldn't be surprised to see the market push northward through the end of 2016.

As you can see in the chart below, the market’s long-term trend, as noted by the 252-day moving average (one year/blue line) currently has a positive bias. However, it’s the other two trends that look like a bowl of spaghetti. The intermediate-term trend (63 days/one quarter) looks flat with a negative bias. The short term (21 days/one month) also looks flat, with nothing but whipsaws these last few weeks.

More importantly, while the moving averages are indicating a neutral stance, the market closed below a rising wedge pattern, which is typically bearish and, thus, signals lower prices ahead. 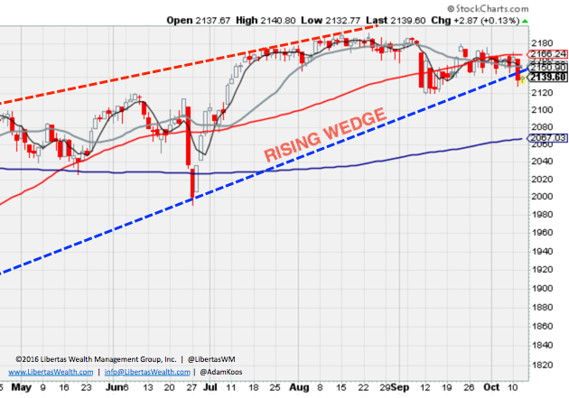 When evaluating the supply-and-demand picture, buying volume has declined dramatically since July, while selling volume has remained virtually flat. This is the biggest reason for the "nowhere" movement of the S&P 500 /zigman2/quotes/210599714/realtime SPX +2.43%  since mid summer. Investors are in a "wait and see" mode, concerned about who is going to be the next POTUS and paying close attention to rising oil prices and Treasury rates out of the corner of their eye.

Naturally, a pullback is the most desirable, as it offers an opportunity to buy into the market's longer-term uptrend at lower prices. However, in the absence of a metaphorical October sale, the election will likely provide the fuel to propel the market to new all-time highs (with a breakout and without the sale, I might add).

So what should we do today?

With regard to stocks, I think one should treat the market like driving a car along the edge of a hurricane in high winds and rain. It's hard to see what lies ahead, so you don't want to floor it. Having some money at work today is okay, especially for aggressive investors. Adding money over the coming weeks, ideally on a pullback, would make sense, considering the longer-term moving averages are in an uptrend. Once we know how the market reacts to the election, I think we'll know what action to take at that time.

Commodities still look very bullish, especially energy and metals, the latter of which is "on sale" as we speak. Gold, in particular, which you can purchase using the SPDR Gold Trust /zigman2/quotes/200593176/composite GLD -0.30%  should hold support at 1200.00, give or take a percentage point or so, but if it doesn't, I'd pull the rip cord and step aside. Oil is relatively overbought at this point, so like the stock market, it's probably best to wait for a pullback in energy as well if you're looking to get in.

Finally, bonds are in no-man's land. Treasury rates are starting to rise, and this is putting downside pressure on bond prices. I'd be very careful when investing in bonds today. Most think bonds are "safe," and even professionals make blanket statements, saying that they're generally good for all conservative investors, but the Barclay's Aggregate Bond Index /zigman2/quotes/200660887/composite AGG +0.07%  fell hard and fast, to the tune of -14.6% in roughly a month, back in 2008. So again, don't blindly invest in bonds, thinking they cannot fall in value.

October is known for being a month where a bottom is marked before the stock market takes off through year end, so there's that. However, just as the "seasonally weak" months could end up positive, so could the "seasonally strong" months just as easily bring the pain. After all, the stock market got absolutely destroyed in these typically positive months, both in 2000 and 2008. Take it easy, drive slow, and be patient. The market will show its hand during this volatile time soon enough.