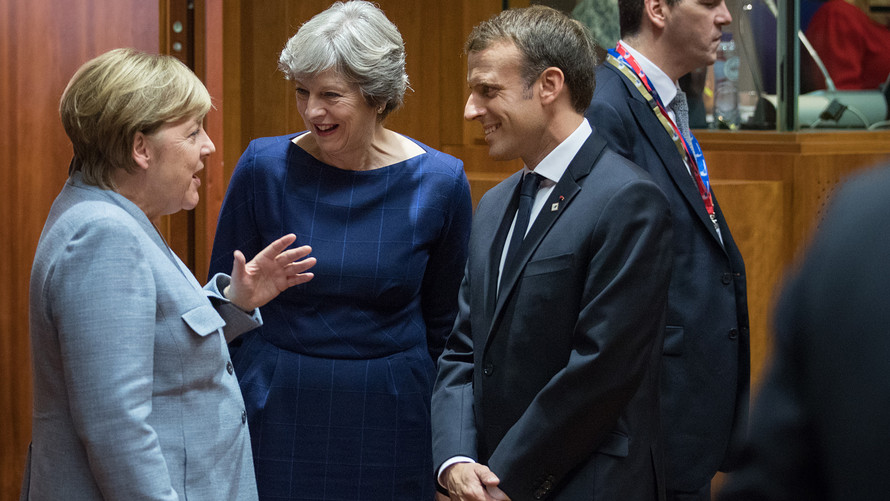 Bloomberg News
U.K. Prime Minister Theresa May is meeting with other EU leaders at a summit in Brussels on Thursday and Friday

U.K. blue-chips fell by the most in two weeks Thursday, as traders reacted to a defeat for the government’s Brexit bill. The setback for British Prime Minister Theresa May is seen as potentially opening the way to a softer U.K. exit from the European Union.

Stocks remained lower after the Bank of England left its benchmark interest rate unchanged, as expected. Ahead of that, data showed a jump in monthly British retail sales.

What’s driving markets : Brexit was a major focus for Thursday’s trade after May’s government late Wednesday was defeated in a key parliamentary vote on legislation for the U.K. divorce from the EU.

The U.K.’s lower house voted to amend the Brexit bill to give members of parliament the power to reject the final divorce deal struck with Brussels. The government had warned that the measure could jeopardize a smooth exit from the EU in March 2019.

The vote—which was an amendment to May’s flagship Brexit bill—came after a rebellion of 11 members of her own Conservative Party, and is seen as a potential route to a softer Brexit.

The setback for the government comes just as EU leaders—including May—meet in Brussels through Friday for a summit where Brexit features high on the agenda. The group is expected to give the green light for divorce talks to move onto the second phase.

May in Brussels on Thursday reportedly said she was “disappointed” with the U.K. legislation defeat but that Britain remains on course to exit from the European Union in 2019.

Central bank day arrives: The BOE in a 9-0 vote left its key interest rate at 0.5%, but the bank did flag concerns with the British economy. “The recent news in the macroeconomic data has been mixed and relatively limited,” it said in a statement. “Domestically, some activity indicators suggest GDP growth in Q4 might be slightly softer than in Q3.”

The European Central Bank left its monetary policy unchanged, as widely anticipated, but the ECB’s inflation projections fell short of what some had expected.

What are strategists saying: “As this Brexit-related uncertainty is almost certainly here to stay, I expect the [BOE] to proceed cautiously from here. Policy makers will naturally be keen to raise rates as fast as the economy allows, if only to provide some firepower when the next economic downturn arrives,” Ben Brettell, senior economist at Hargreaves Lansdown, in a note.

“But with domestic inflationary pressures thin on the ground and Brexit casting its customary shadow, there’s no real imperative to move for some time. Markets are tentatively pricing in a further rise towards the second half of next year,” he said.