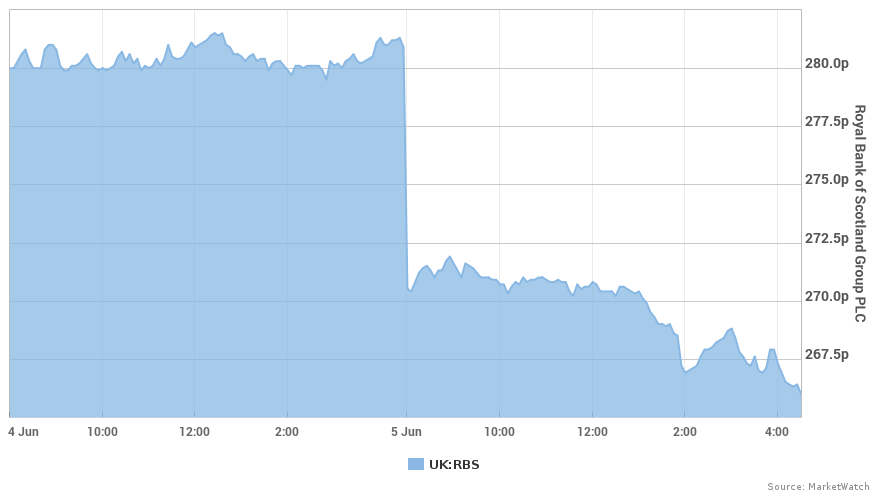 U.K. blue-chip stocks dropped by the most in a week Tuesday, hurt by a climb in the pound and by falling shares of Royal Bank of Scotland PLC after the U.K. government reduced its stake in the lender at a loss.

How markets are performed

The FTSE 100 index (FTSE:UK:UKX) lost 0.7% to close at 7,786.80, led by declines in the utility and financial sectors. That marked the index’s biggest percentage loss since May 29, according to FactSet data. London’s blue-chip benchmark on Monday climbed 0.5%.

After a wobbly start, the FTSE 100 moved solidly lower in the wake of data on the British services sector, the biggest driver of the country’s economic growth. While the PMI figure exceeded expectations, it spurred a jump in the pound. Pound strength can hurt the FTSE 100 as earnings made overseas by multinational companies are reduced when that profit is translated back into sterling.

The services sector purchasing managers index for May came in at 54.0 from IHS Markit/CIPS. That beat the 53.1 consensus estimate from FactSet, and was up from April’s reading of 52.8. Readings above 50 indicate expansion. The Bank of England is closely watching such economic data as it tries to determine when it will start raising interest rates again. The key rate stands at 0.5%.

The services-sector figure added to recent beats for data on U.K. construction and manufacturing sectors.

“But I don’t think [the data] necessarily performed so well to cause any real hawkish push (by the BOE) just yet. If the data continues to improve over June as well, then perhaps that might come in to play a little bit more,” said Connor Campbell, financial analyst at SpreadEx, in an interview Tuesday.

On the corporate level, Royal Bank of Scotland shares fell after the U.K. government sold a portion of its stake in the lender at a 3.5% discount to RBS’s closing price on Monday. The shares sold at £2.71 for a total of £2.51 billion ($3.34 billion). British taxpayers paid on average £5 per RBS share during a bailout 10 years ago.

The government has slowly been shrinking the state’s holding in RBS, re-privatizing the bank it stepped in to save during the financial crisis a decade ago.

“The FTSE 100 keeps being pulled back toward 7,700 in the last week...I think at the moment, the focus is off of the U.K. and it’s been on the eurozone and the situation in the U.S.,” as international trade tensions have been mounting, said Spreadex’s Campbell. “That’s left the Footsie without a direction of its own,” he said. In the eurozone, both Italy and Spain have sworn in new governments in the last few days.

But Connor added that the benchmark isn’t that far off from its record close of 7,877.45. “Our clients are buying the Footsie quite heavily and that may be more that they’re happy with where it is at,” considering the multiple global headwinds the index has faced, he said.

Carnival PLC shares (LON:UK:CCL)  slumped 6.4% as Morgan Stanley cut its fiscal 2019 earnings estimate on Carnival by 11% on fuel and currency-related risks, and said it would “stay cautious on the cruise space due to oversupply risk.” Industry agents have voiced concern about weakness in the fourth quarter, said Morgan Stanley analyst Jamie Rollo in a research note.

WPP PLC shares (LON:UK:WPP) (NYS:WPP)  fell 3% after Berenberg cut its rating to sell from hold on the world’s largest advertising firm. “Regardless of the reasons for recent management change, WPP’s Q1 relative performance versus peers (particularly in North America) showed that all is not well from an operational perspective: we think that this will prove more difficult and costly to fix than consensus expects,” said analyst Alastair Reid in a research note.

EasyJet (LON:UK:EZJ)  fell 2.5% even after a ratings upgrade to hold from sell at Liberum.

Sky PLC  added 0.3% after the U.K. government cleared Comcast Corp.’s (NAS:CMCSA) roughly $30 billion bid to buy the broadcaster. That essentially opened the door for a bidding war for Sky, as 21st Century Fox Inc. (NAS:FOXA)   (NAS:FOX)  wants to purchase the rest of Sky that it doesn’t already own.