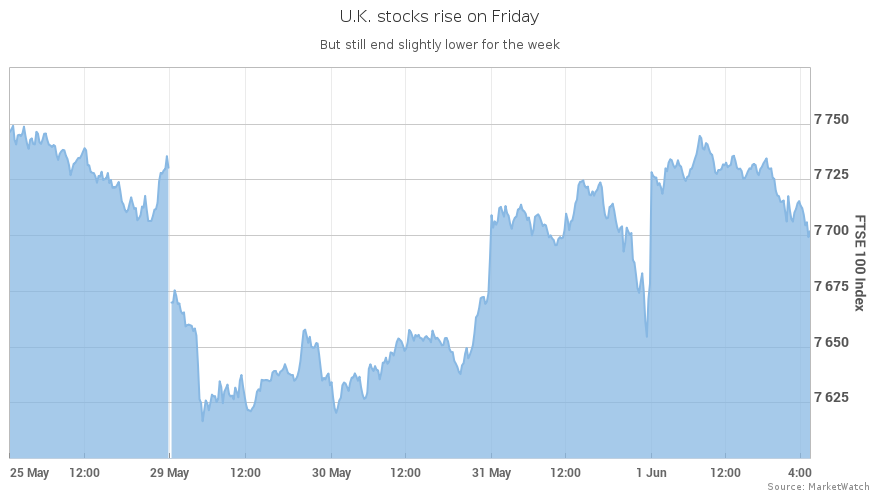 U.K. stocks bounced higher Friday as the broader European equity market found cheer from the formation of a new government in Italy. But the gain wasn’t enough for London’s blue-chips benchmark to avoid a lackluster weekly performance.

How are markets performing

The direction of U.K. stocks was largely driven by action in continental Europe /zigman2/quotes/210599654/delayed XX:SXXP +0.46% , as it has been much of this week. Italian stocks /zigman2/quotes/210598024/delayed IT:I945 +0.18%  leapt nearly 3% intraday after populist parties the 5 Star Movement and the League made a new deal to form a coalition government. The government was sworn in on Friday, ending months of political deadlock. Italy’s new prime minister, Giuseppe Conte, is a lawyer, an academic and a political novice.

“Political sentiment in Italy has boosted investor sentiment in Europe” but “as the parties still hold antiestablishment polices, this upward move might be short-lived,” wrote CMC Markets analyst David Madden.

Read: Think the Italy panic was bad? Just wait until central banks turn off the spigot

Meanwhile, Spanish stocks /zigman2/quotes/210597995/delayed XX:IBEX -0.42% extended gains after lawmakers voted to oust Prime Minister Mariano Rajoy. Rajoy on Friday lost a no-confidence vote in parliament that was prompted by corruption convictions for senior members of Rajoy’s party. Spain’s new prime minister will be Pedro Sánchez, leader of the Socialist Party. The question now is whether he’ll decide to call a fresh general election ahead of the scheduled 2020 ballot.

London-listed shares held to higher ground after the U.S. Labor Department said the world's largest economy added 223,000 new jobs in May, exceeding a forecast of 200,000 produced by a MarketWatch poll of economists. The unemployment rate fell to 3.8% from 3.9%.

“Barratt has underperformed heavily over the last year, on earnings risk concerns that we think will prove unfounded,” said analyst Emily Biddulph in a research note. Shares of rival Taylor Wimpey PLC fell 0.2% as the stock was downgraded to neutral from overweight.

Manufacturing activity in the U.K. expanded modestly in May from April, said IHS Markit and CIPS, whose PMI came in at 54.4, up from 53.9 in the previous month that marked a 17-month low. Analysts surveyed by FactSet had expected a reading of 53.5. Markets were little changed following that release.