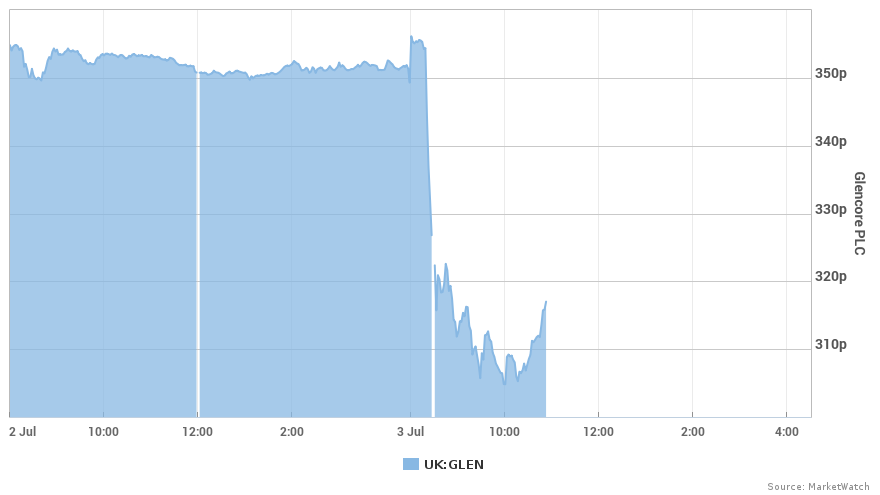 U.K. stocks on Tuesday staged a recovery from their biggest drop in a week that stemmed from trade-war worries, but shares of commodity heavyweight Glencore PLC closed lower, in the wake of a subpoena from the U.S. Justice Department.

The FTSE 100 found some upside support after logging its worst performance since June 25 in the previous session, with broader European equity markets (STOXX:XX:SXXP)  appearing to find relief after German Chancellor Angela Merkel reached a migration deal with one of her coalition partners, easing concerns that the issue would upend her government.

The FTSE 100 on Monday suffered after the European Union threatened $300 billion in fresh tariffs against U.S. products if U.S. President Donald Trump follows through on levies targeting the trade bloc’s auto makers. As well, the Trump administration is expected to formally impose tariffs on a round of Chinese goods on Friday, and Beijing is expected to retaliate.

But concerns about a mounting trade war is putting pressure on China’s yuan (XTUP:USDCNY) , which on Tuesday fell below the widely watched threshold of 6.700 per U.S. dollar. China will “keep the yuan exchange rate basically stable at a reasonable and balanced level,” said Yi Gang, governor of the People’s Bank of China, according to Bloomberg .

Mining stocks are heavily weighted on the FTSE 100, and China is a major buyer of industrial and precious metals.

In that group Tuesday, shares of Glencore PLC sank by the most since March 2016 after the commodities trader and miner said the U.S. Justice Department wants the company to turn over records related to its compliance with laws against foreign-corrupt practices and money laundering.

U.K. construction activity hit a seven-month high in June, with IHS Markit/CIPS saying its PMI reached 53.1, up from 52.5 in May and beating a FactSet estimate of 52.5. Increased residential work and the strongest rise in new orders since May 2017 contributed to the June reading. The pound briefly edged close to $1.3200 after the data were released. It also got a boost after Bank of England policy setter Michael Saunders, in a CNBC interview, said rates U.K. interest rates may have to go up faster than expected because of inflationary pressures.

Saunders and two other BOE policy makers in June voted to raise interest rates by a quarter-percentage point to 0.75%.

“True, the [June construction] figures are flattered by comparison to the weak data recorded at the start of 2018. But such solid improvements in both output and new orders reveal some genuine momentum. In part this is the release of pent-up demand, which has been building for months,” said Blane Perrotton, managing director property consultancy Naismiths, in a note.

“The downside of this is the spectre of rapid cost inflation, as construction firms rush to recruit from a shrinking pool of available workers and the weak pound keeps imported material costs high,” said Perrotton.

Glencore PLC (LON:UK:GLEN)   (OTC:GLCNF)  tumbled 8.1% as the Justice Department is seeking documents related to Glencore’s business in the Democratic Republic of Congo, Nigeria and Venezuela.