SAN FRANCISCO (MarketWatch) — Gold futures dropped roughly $35 an ounce Tuesday to mark their lowest closing level since the start of the year, as the dollar held on to gains amid continued concern about political upheaval in Europe.

Prices, which had briefly dipped to as low as $1,595.50, marked their lowest settlement for a most-active contract since Jan. 3, the first trading day of the year, according to FactSet Research.

“As we sit almost [midway] through the year and with events in the euro zone firmly in the driver’s seat as far as risk aversion goes, gold is sitting on an awkward precipice in so far as it has been on a winning streak each of the past 11 years,” said Andrew Wilkinson, chief economic strategist at Miller Tabak & Co., in a note. “Yet now when the going arguably gets tougher, it can’t hold its own.” 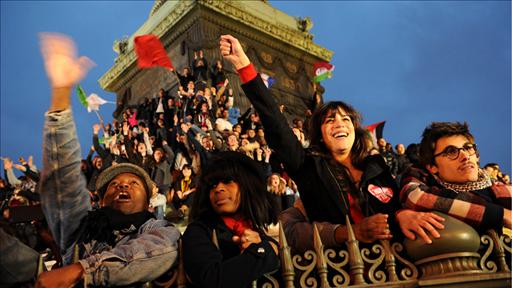 A read on European elections

Voters in France and Greece have decisively rejected austerity measures. Can Europe dig out from financial crisis without employing severe cutbacks?

The “dollar volatility might look just the obverse of the euro’s travails,” said Adrian Ash, head of research at BullionVault, “but its impact on stocks, commodities and precious metals is very much greater right now. There’s clearly more fear than greed out there in all asset classes.”

The dollar continued to rise from Monday as investors sought what are perceived as less-risky assets after weekend elections in parts of Europe. Elections on Sunday resulted in the defeat of French President Nicolas Sarkozy and ushering in of Socialist challenger François Hollande.

In Greece, meanwhile, parliamentary elections on Sunday resulted in major defeats for the mainstream parties, which are struggling to form a majority.

A stronger dollar pressures dollar-denominated commodities as it makes them more expensive for holders of other currencies.

Overall, “people are growing tired of the financial crisis,” said Ash. “Even though they can’t escape it, that’s creating fatigue with gold as an investment story.”

But “the crisis isn’t going away, and investment gold holdings have remained very strong,” he said in emailed comments. “We’re now seeing an upturn in Comex net length, plus a rebound in coin sales. Underlying demand at BullionVault has now added half-a-tonne to our users’ holdings in the last 5 weeks.”

Looking ahead, there are significant developments that may boost demand for gold.

While the higher dollar and uncertain European situation is driving gold lower, Jeff Wright, managing director at Global Hunter Securities, said he is “optimistic that gold will regain ground via physical demand from China and India in the coming weeks.”

China had record imports for physical gold in the first quarter, and “we see this trend continuing with a flight from riskier asset classes in China,” he said.

Also, “the Indian physical market should begin to recover as the government announced it will cancel the excise tax imposed on gold jewelry and imported gold,” said Wright. Jewelers in India had gone on strike earlier this year to protest against the tax. Read about the early April end to the strike.

The news on India and China are of “seismic importance,” said Ross Norman, chief executive officer at Sharps Pixley, though “neither elicited a move greater than the typical bid/offer spread of the spot price.”

For now, other commodities such as oil saw sharp declines Tuesday, as European and U.S. stock markets fell. Read more on Europe Markets.

The broader suite of metals futures took their cue from losses in gold.

Myra Saefong is a MarketWatch reporter based in San Francisco. Barbara Kollmeyer is an editor for MarketWatch in Madrid.