SAN FRANCISCO (MarketWatch) -- Green Plains Renewable Energy on Thursday purchased two ethanol plants in Nebraska, formerly run by now-bankrupt VeraSun, in what is expected to be a wave of consolidation in the U.S. ethanol business.

The sites were purchased from a lending group led by AgStar Financial Services, which took ownership of the plants during the VeraSun bankruptcy.

AgStar has agreed to fund the deal through new debt financing and a $16 million working capital loan. Green Plains will pay interest on those loans. 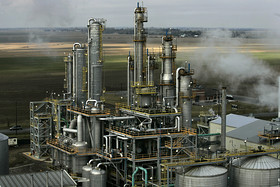 The ethanol business is beginning to consolidate after a wave of plant openings. An ethanol plant in Chatham, Ontario. (Photo: Reuters)

The deal is expected to close in June. Green Plains aims to have the plants running at full-speed by late July. The Central City site began operations in 2004 and the Ord plant started production in 2007. Combined, the sites will employ 90 workers.

Becker said Green Plains will seek to acquire others plants at the right price.

Based in Omaha, Neb., Green Plains owns four ethanol plants in Iowa, Indiana, and Tennessee. It sells its own ethanol and markets ethanol for other producers. The company, founded in 2004, also owns grain storage facilities.

The company said the deal will lower its production costs and bolster the company's ability to complete in the beleaguered ethanol industry, which has been decimated by razor-thin profit margins and weak demand. See MarketWatch Special Report on Ethanol.

Becker said the deal will help cut operation costs because they can sell so-called wet distillers grain to the region's cattle farms. It costs extra money to dry those grains, a by-product of the ethanol production process.

At least 10 producers have landed in bankruptcy court in the past six months, including Aventine Renewable Energy and plants run by Pacific Ethanol . BioFuels Energy /zigman2/quotes/209013335/composite BIOF -3.95% , whose two plants are running at 100% capacity, wants to restructure its debt.

Green Plains is not immune from industry-wide problems. For the quarter ended March 31, the producer reported a net loss of $9.3 million, dragged down by plant repairs and weak ethanol-industry margins. Revenue was $221 million.

Matt Andrejczak is a reporter for MarketWatch in San Francisco.