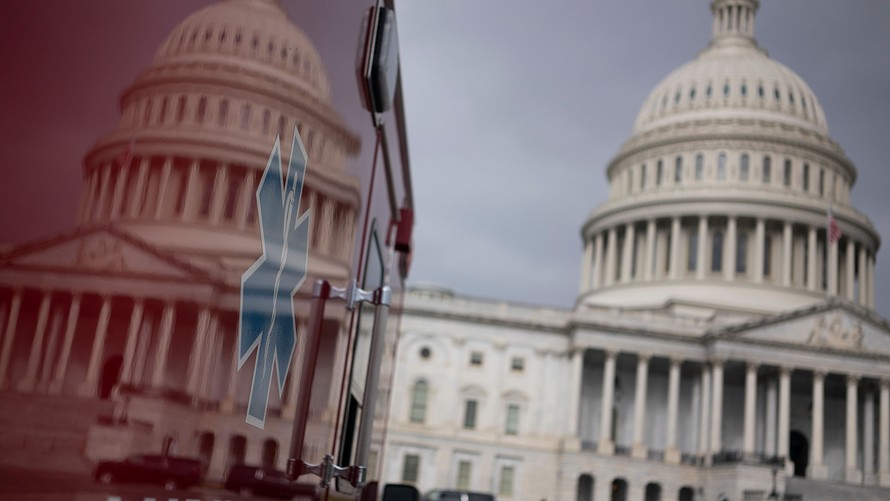 Getty Images
The Capitol building is reflected in the side of a standby ambulance on Thursday in Washington, D.C.

President Donald Trump on Friday afternoon signed a $2 trillion coronavirus stimulus package into law to help the U.S. economy cope with the pandemic, following the House’s approval of the measure in a quick voice vote.

The Democratic-run House’s OK earlier Friday came after a Republican congressman’s effort to slow down the package flopped. The Republican-led Senate unanimously passed it late Wednesday.

GOP Rep. Thomas Massie of Kentucky indicated he would call for a roll-call vote and did exactly that, but there weren’t enough other lawmakers willing to second his request. He had said he objected to the huge package due to how much it adds to the national debt, but also said he could support it if the legislation were just about helping people get more unemployment benefits.

Massie tweeted Friday that he planned to force House members to “vote on it by pushing ‘yes’ or ‘no’ or ‘present,’” as he suggested it’s not “too much to ask that the House do its job.” Massie’s maneuvering spurred lawmakers to return to Washington, D.C., for the possible roll-call vote, as opposed to the voice vote or the unanimous consent that House Speaker Nancy Pelosi aimed for earlier this week.

“I came here to make sure our republic doesn’t die by unanimous consent in an empty chamber, and I request a recorded vote,” the congressman said on the House floor.

Many other lawmakers and Trump criticized Massie, a libertarian-leaning conservative who has been called “Mr. No.” Massie is known for moves such as providing the lone vote against a recent Hong Kong human rights bill. John Kerry, the former secretary of state and longtime Senate Democrat, quipped that he “finally” agreed on something with Trump — that Massie was way out of line.

Trump tweeted that the congressman is “a third rate Grandstander” who couldn’t stop the package but only delay it. The president suggested Massie should be thrown out of the Republican Party.

The action in Congress on Friday follows news that the U.S. has become the country with the highest number of COVID-19 cases. It also comes after a record 3.28 million Americans applied for unemployment benefits last week due to the outbreak.

Ahead of the voice vote, a parade of Democrats and Republicans stepped to the podium to speak in favor of the bill.

“This legislation represents a bipartisan resolve to meet the coronavirus challenge head on,” said House Majority Leader Steny Hoyer, the Maryland Democrat, in a speech on the House floor. Many lawmakers said in their remarks Friday that the package had flaws, but the House must pass it. “The bill we are voting on today is a crucial step,” said GOP Rep. Liz Cheney of Wyoming.

Related: Congress is almost done with the coronavirus bailout. The next step? Fix it

The House’s sergeant at arms warned lawmakers and their staff in a letter Thursday to “maintain 6-foot social distance spacing as much as practicable” to fight against the pandemic. “In the event of a recorded vote, Members will be notified. At such time, voting will be done alphabetically in groups of 30 Members over an extended period of time,” the letter said.

Republican Rep. Pete King of New York tweeted that there was “risk of infection and risk of legislation being delayed” because of “one Member of Congress refusing to allow emergency action.” King said it was “disgraceful” and “irresponsible.”