‘There could still be adoption of a limited infrastructure package this year,’ analyst says 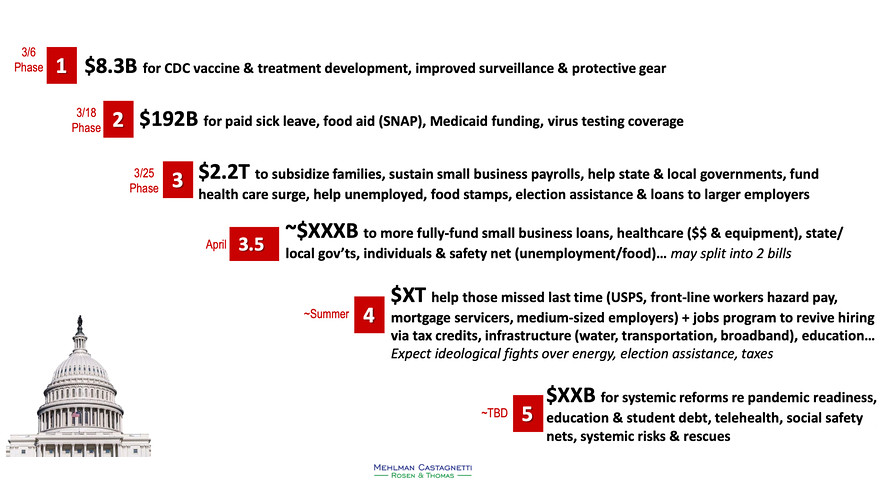 As Congress breaks records with its spending in response to the coronavirus crisis, it might all feel a bit hard to track.

So here’s a handy chart giving a timeline and brief descriptions for the massive outlays.

The pandemic-related spending began in early March with an $8.3 billion measure that provided money to federal health agencies as well as state and local governments.

Then came a mid-March package costing an estimated $192 billion that targeted paid leave and testing, as shown in the above chart, which comes from lobbying firm Mehlman Castagnetti Rosen & Thomas .

In late March, President Donald Trump signed an unprecedented $2.2 trillion measure into law. Known as the CARES Act, Washington’s “Phase 3” legislation is offering direct payments to Americans, aid to small and large businesses and other programs.

During the past week, Democratic and Republican lawmakers have been struggling to reach a deal on what some analysts are describing as a “Phase 3.5” response — a bill that could give an extra $250 billion to the CARES Act’s Paycheck Protection Program for small businesses. The GOP has argued just for an additional $250 billion for PPP, while Democrats have pushed for packaging that with other provisions, such as $100 billion for health-care institutions and $150 billion for state and local governments. Analysts predict an agreement could be achieved by the end of the week, when PPP looks set to run out of money.

Congress and President Donald Trump’s administration also have been working on “Phase 4” legislation, or a “CARES 2 Act,” to fight the coronavirus causing the disease COVID-19 and the resulting economic damage. Analysts have predicted that next big spending package could cost about $1 trillion and become a reality between late April and mid-May.

The possible “Phase 4” bill does not appear to be focused on major infrastructure spending, as once seemed possible, but rather looks set to extend programs from the CARES Act. But there also has been talk of “Phase 5” legislation that could feature outlays on U.S. infrastructure or other stimulus efforts.

“There could still be adoption of a limited infrastructure package this year,” said Capital Alpha Partners analyst Charles Gabriel in a recent note to clients. “There could be more direct payments to workers and families; state and local government funding could grow; and there could an increase/extension of unemployment benefits. But all of that, and any full Phase IV (or V) package, could turn on whether the virus peaks in the next few weeks or lasts into summer/fall.”

From the MarketWatch archives (December 2018): How the recent tax cuts and budget deal jack up the national debt — in one chart

This is an updated version of a report first published on April 10, 2020.