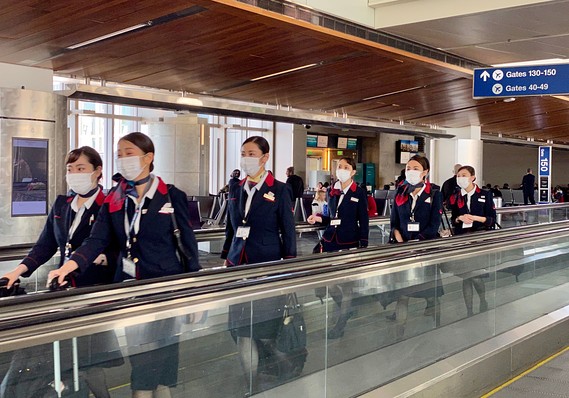 Getty Images
The coronavirus renamed COVID-19 once seemed like a distant problem to the U.S. economy, but threat is growing.

The once seemingly distant threat of the coronvirus outbreak in China is starting to spread and the U.S. economy is showing its first symptoms.

Apple /zigman2/quotes/202934861/composite AAPL +1.98%  warned on Monday that sales in the current quarter could fall short of forecast because of production delays tied to the virus infection, now known as COVID-19. Other U.S. companies such as WalMart /zigman2/quotes/207374728/composite WMT +0.93%  have since issued similar warnings.

As the world’s second biggest economy and largest manufacturing hub, China is the source of many consumer and industrial products such as cell phones, TVs, clothing, pharmaceutical drugs, solar panels, auto parts and steel.

Many Chinese factories have been closed as the country tries to contain the virus, threatening the supply chains of hoards of Western companies like Apple that source much of their production in the world’s second largest economy.

“Because so many large companies built up extensive supply chains with China,” chief European financial economist David Owen of Jefferies LLC said, “we should expect to see more companies warn on supply chain impacts on revenues.”

The damage isn’t limited to technology firms, drug makers and manufacturers, either.

Large retailers such as Starbucks /zigman2/quotes/207508890/composite SBUX +0.64%  and McDonald’s /zigman2/quotes/203508018/composite MCD +0.85%  have shut stores in the country while Chinese tourism to the U.S. has largely dried up. That will hurt hotels, restaurants and luxury brands coveted by Chinese consumers.

Most U.S. economists still figure the damage will be limited. They point to a snapback in global economic growth in 2003 after the early effects another deadly virus known as SARS faded away.

“Our base case is that the virus does not become a full-blown pandemic, and that the short-term economic impact is noticeable but manageable,” said managing director Sam Bullard of Wells Fargo.

Yet some forecasters have reassessed their initial views.

Goldman Sachs said the crisis could be even more costly in the short run than it previously forecast, shaving as much as 0.6% off U.S. economic growth in the first quarter. And BNP Paribas on Tuesday said the short-term damage “will be great than many assume.”

Even then, most forecasters predict the threat will recede later in the year and that the global economy will quickly recover most of the lost ground — what is known as a “V” -shaped recovery.

The rapid spread of COVID-19 casts doubts on that assumption. While the new coronavirus has a lower mortality rate than SARS, it’s also turned out to be far more contagious and harder to contain.

“The question is, how long will the disruption last?” said chief economist Chris Low of FHN Financial.

The longer China has to resort to stringent measures, the more likely the U.S. and global economies will suffer significant damage. Some worry the disruption will be prolonged.

The International Monetary Fund is sticking to its call for 3.3% growth in the global economy in 2020, but the agency said its prediction is at risk. “The recovery could be derailed by a ... a further spread of the coronavirus,” the IMF said.

Some private forecasters have turned even more pessimistic. Oxford Economics cut its global growth forecast to 2.3% — potentially the slowest pace for the world economy since 2009.

What might insulate the U.S. more than others, though, is that the American economy is less exposed to global trade. Only about a quarter of all U.S. economic activity involves exports and imports — a far lower percentage compared to Europe and most other countries.

The Trump administration’s trade war with China, what’s more has had the ironic effect of forcing many American companies to stock up on supplies or seek out suppliers in other countries. That might also cushion the blow, at least for a little while.