‘We don’t want to punish ourselves. We are not averse to spending money’ 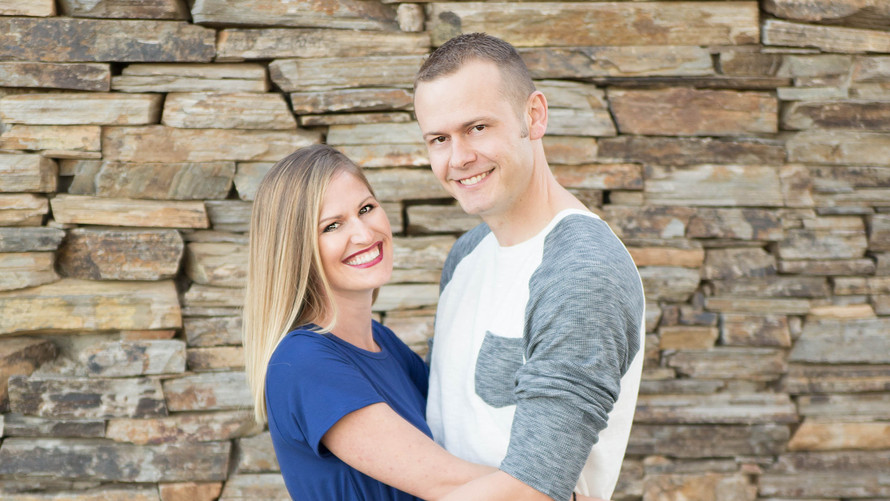 More than 10 years ago Ryan and Courtney Luke were both working, but with nothing to show for it except big cars and big debts.

The couple felt stuck. With all their money tied up in their cars and debts, they couldn’t afford to spend on other activities or experiences, said Ryan, a 35-year-old police lieutenant at a large law enforcement agency in Arizona. One day they thought, “There’s got to be a better way to do it.”

The Lukes found their way.

‘Those goals to us are more important than things anymore. They keep us motivated.’

—Ryan Luke, who saved money even while halving his household income

They now have a $32,000 rainy day fund, plus $320,000 in Ryan’s retirement account. They stockpiled that savings even as they halved their household income when Courtney, 35, left her job to stay home with their three children, who are now between the ages of 6 and 9.

They got there by budgeting and re-evaluating what was worth their money. They decided to put their money toward family vacations, the dream of one day buying a California beach house and laying the foundation for a comfortable retirement. Not on the list: the latest phone or this year’s car.

“Those goals to us are more important than things anymore. They keep us motivated,” said Ryan, who also has a personal-finance blog . (The blog is not a source of income.)

Growing up, Ryan never talked about money with his parents. Before he met Courtney in 2006, Ryan figured as long as he paid his bills and maintained $2,000 in his checking account, that was good enough.

Ryan bought a late model car every 100,000 miles and enjoyed small indulgences like a $30 monthly video-game subscription. He bought food at work and lived in his condominium unit, paying a five-year adjustable rate mortgage. He eventually lost the town house in a 2008 foreclosure once the rate shot up.

Ryan put Courtney’s engagement ring and wedding on a credit card, and walked down the aisle with regrets and guilt. Not about her. About saddling her with his finances. “She’s paying for a gift I gave her,” he thought at the time.

They married in November 2007, and Courtney, handy with numbers and Microsoft /zigman2/quotes/207732364/composite MSFT +2.11%   Excel, did some digging on where their money went each month.

Don’t miss: Opinion: The road to riches is this simple: Drive a crappy car

Ryan needed some time to come around to a spending plan, which they started later in 2008. “I didn’t like the idea of a budget. To me, it felt restrictive,” he remembers.

But he realized that if the couple was going to have children and Courtney was going to stay at home, they needed the money to do it.

“The easiest part was cutting the food out,” Ryan said. The couple made weekly grocery lists and Courtney made Ryan’s lunches ahead of time.

These days, Ryan buys lunch once every two weeks or so. The family eats out once a month, if that. It felt like a splurge when Ryan recently spent $7 on a Chipotle /zigman2/quotes/200781108/composite CMG +2.53%  burrito while at work. “I felt awful doing it. … Just because I’m so trained.” 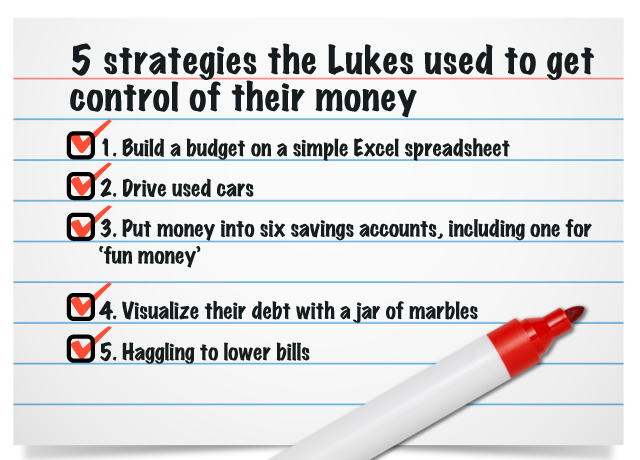 Ryan ended his video game subscription and swapped his cable television package for an antenna that got him the first 25 channels — which was all he said he needed. Courtney started snipping coupons and she opened Ryan’s eyes to the art of haggling.

Once, they saved about $100 because they asked for the floor model of a filing cabinet at OfficeDepot /zigman2/quotes/204015456/composite ODP +6.77% . Recently, their internet service went up from $35 to $45, but Ryan negotiated a $39 monthly bill during a call to customer service.

All the freed-up money went towards paying off Ryan’s XTerra and credit card bill. He sold the XTerra on Craigslist and put the money towards a used car. A friend took over the payments on Courtney’s Tahoe in exchange for an old Chevy Blazer.

The couple now drives cars that are more than 10 years old and pushing 200,000 miles.

‘As long as we stuck to our budget, we always had more money than expected.’

“As long as we stuck to our budget, we always had more money than expected,” he said.

Having Courtney at home has helped the couple avoid one of the biggest financial burdens families face: child care bills. Day care, even for one child, can prove costly. Parents paid an average $9,000 to $9,600 in 2017 to send one child to day care, according to Child Care Aware of America.

Since 2009, Ryan’s take-home pay has climbed to $72,000 through raises. All that added pay has gone straight to Ryan’s retirement savings.

By now, 24% of Ryan’s gross earnings are going to retirement. There’s 7.5% taken out for his pension and another 16.5% devoted to Ryan’s 457 plan, a defined contribution plan similar to a 401(k). The retirement money is invested in Vanguard index funds.

Working in law enforcement, Ryan occasionally makes overtime pay and he also has a part-time security job he does one day a week. The couple doesn’t count on Ryan’s extra wages when budgeting. Some of the extra money goes to their mortgage. 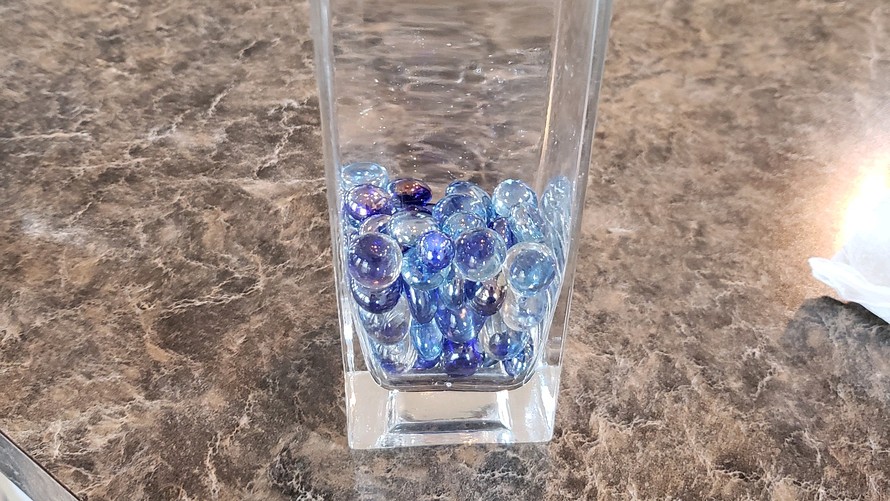 In addition to the meticulous budgeting, they use some unconventional strategies. One is a glass jar on their kitchen counter full of marbles. For every $1,000 they pay off on their $172,000 three-bedroom house, they take a marble out of the jar. Ryan came up with the idea because he’s a visual person. “We can actually see the balance getting lower, versus numbers on paper,” Ryan said.

The couple has six savings accounts, including one for ‘fun money.’

Other surplus money goes to the couple’s savings accounts — all six of them. There’s an account for a car, an account for vacations, a short-term emergency fund and a larger rainy day fund.

The pair also have their own “fun money” account. “The fun money really allows us spend on junk or things you want personally, without the guilt,” Ryan said.

The couple typically pays for daily purchases with debit cards, but uses a Costco /zigman2/quotes/201191698/composite COST +1.29%  credit card for its rewards on gas and purchases at the store. They rarely shop retail for clothes and get the previous year’s cell phone rather than the newest one.

Ryan sometimes gets ribbed by family and friends who wonder if he’s too tight with his money.

He shakes it off, just like he doesn’t get too worked up over his wife’s $220 monthly membership for Orangetheory Fitness classes, because health and wealth are connected in his mind.

‘We don’t want to punish ourselves. We are not averse to spending money. It’s just got to fit in the plan.’

“We don’t want to punish ourselves. We are not averse to spending money. It’s just got to fit in the plan,” said Ryan.

The key is constant communication about money and the goals behind all the saving and budgeting.

The couple dreams of one day having a California beach house, while keeping a house in Arizona to see their kids.

“As a cop, there’s no way I’m going to do that unless I actively save,” Ryan said. “What really got us motivated, and kept us motivated, is talking about our goals together.”