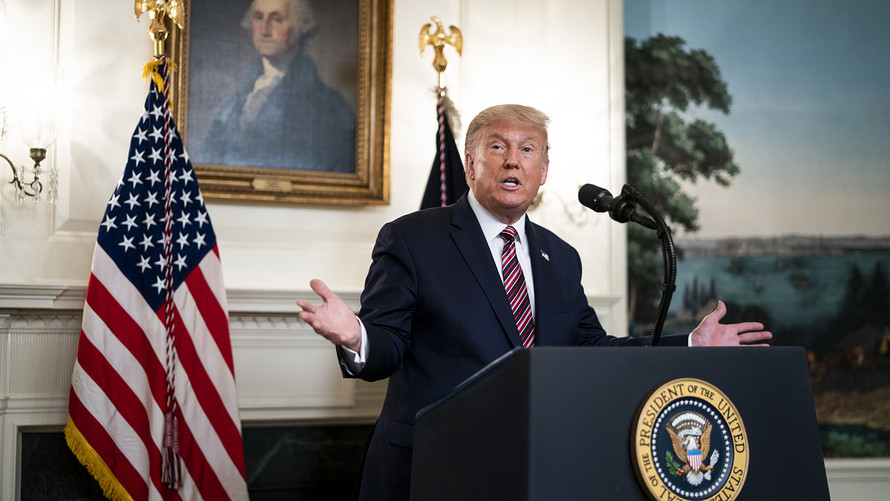 Getty Images
President Donald Trump speaks during a briefing on Wednesday at the White House.

President Donald Trump defended himself during a Thursday news conference, as he drew more questions over telling famed journalist Bob Woodward months ago that he was playing down the coronavirus.

Trump said the question’s phrasing was “a disgrace.”

The president then was asked why he told Woodward that COVID-19 was worse than the most strenuous flu, but then told the public that it was just like the flu. Trump said: “What I went out and said was very simple. I want to show a level of confidence and I want to show strength as a leader, and I want to show that our country is going to be fine one way or another.”

Trump then repeated a view that he tweeted about earlier in the day, saying that Woodward could have reported on his comments sooner. And at the start of the news conference at the White House, Trump sounded upbeat about the coronavirus crisis.

Trump’s remarks come 54 days before the Nov. 3 election, and as Democratic challenger Joe Biden has an edge of 3.9 percentage points over the Republican incumbent in a RealClearPolitics moving average of polls focused on top swing states that are likely to decide the White House race. Betting markets are giving the former vice president a 53% chance of winning vs. Trump’s 46.3%.

Biden has denounced Trump over the Woodward developments, saying Wednesday that “a life-and-death betrayal of the American people” had occurred.

During his news conference on Thursday, Trump also said Secretary of State Mike Pompeo was departing Thursday evening for Qatar for “the beginning of intra-Afghan peace negotiations,” and he elaborated on the administration’s plans for troop withdrawals in Afghanistan, as well as drawdowns in Iraq.

On Thursday evening, Trump is slated to deliver a campaign speech in Michigan, with his visit to that swing state following Biden's trip there on Wednesday.