Why is market volatility so low when uncertainty is so high? 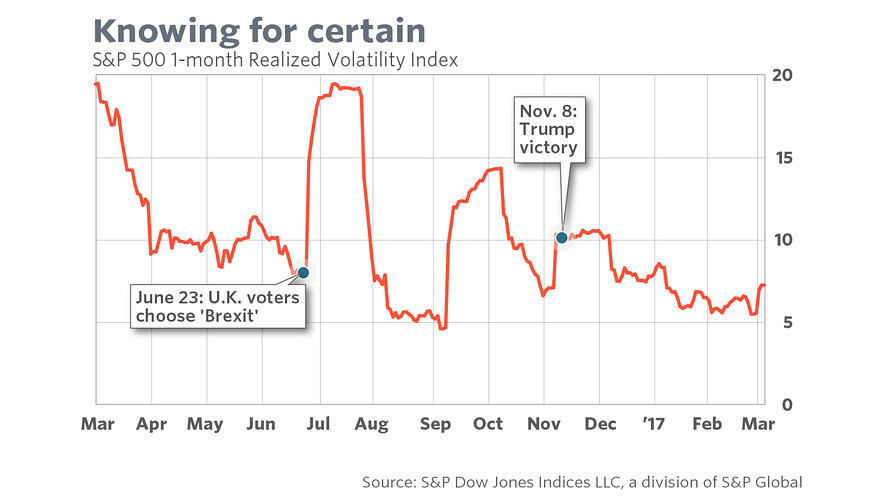 This story was originally published March 6.

Just like New York Federal Reserve President William Dudley, investors might be looking at the relationship between uncertainty and market volatility all wrong, one analyst says.

Volatility—and expectations for future volatility—in the stock market and across other assets remains subdued even as investors wrestle with a high degree of uncertainty about everything from the Federal Reserve to the Trump administration’s fiscal plans to a series of elections that could further undo Europe’s postwar political order.

Dudley last month admitted he was perplexed , saying, “You would think if uncertainty was high, you’d have a bit more volatility.”.

But that’s not how it works, wrote Steve Barrow, currency and fixed-income analyst at Standard Bank, in a Monday note. “Certainty creates volatility, not uncertainty,” he said.

In the currency market, Barrow notes that one-year historical, or realized, volatility hit a postcrisis peak at just over 11.5% at the beginning of 2016 but fell as low as 7.75% by the end of February and continues to trade around 8%. That’s in the course of a year that saw British voters choose to take their country out of the European Union in the Brexit referendum and Donald Trump’s unexpected November U.S. presidential election win.

“A look at shorter-dated historical volatility shows a similar slide, albeit punctuated by huge spikes when shocks occur, such as the Brexit shock and the U.S. election shock. For it is when the uncertainty ahead of these votes turn to certainty when the results are announced that currencies—and other asset prices—start to fly,” Barrow said.

Barrow notes that periods of uncertainty ahead of a key event can result in a pickup in implied volatility, which is what the VIX measures. (Some analysts saw a rise in the VIX last week, uncharacteristically in lockstep with gains by the S&P 500, as a potentially negative sign for stocks.)

But, Barrow notes, “actual volatility usually has to wait for the result of the event itself.” That phenomenon is reflected in the chart at the top of the page, showing S&P 500 realized volatility.

Economist Chris Dillow, in his column in the U.K.’s Investors Chronicle , offered an explanation for the phenomenon last August. Dillow took exception to the idea that low volatility suggests investors are complacent. Instead, low volatility reflects a high level of disagreement between market participants, he said. In other words, there is a healthy mix of bears and bulls.

As a result, it’s easy for buyers to find sellers and for sellers to find buyers, which makes for relatively stable price action. “High volatility, on the other hand, would be a sign of consensus; prices fall a lot when most investors want to sell and rise a lot when most want to buy,” Dillow wrote.

Meanwhile, investors have plenty to wrestle with in coming weeks and months. The Federal Reserve seems to have well telegraphed an expected rate rise later this month, but the outlook for U.S. tax policy and other Trump administration fiscal priorities is still cloudy. Then there are elections in the Netherlands and, crucially, France that could see anti-euro parties gain power.

So if anything is certain, it’s that near-term uncertainty is unlikely to go away.