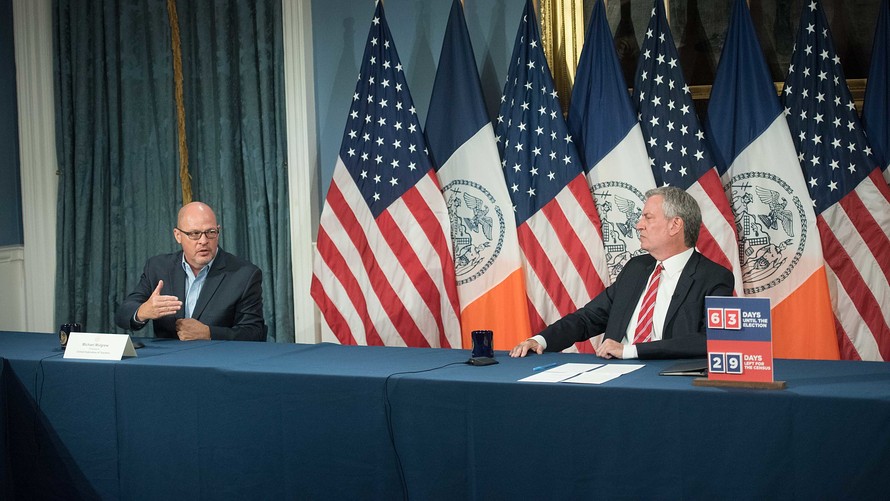 Michael Appleton/Mayoral Photography Office
Mayor Bill de Blasio, right, said the delay is “a revision that still allows us to keep things moving forward on a tight timeline but with additional preparation time.”

Amid mounting pressure from the teachers union to delay the start of the school year, Mayor Bill de Blasio announced Tuesday that in-person classes will be pushed back until Sept. 21, which is 11 days later than originally planned.

The delay is part of an agreement reached between the city and the United Federation of Teachers, which was threatening a potential strike over safety concerns regarding in-person learning. The union’s demands included mandatory testing in schools, which before today’s agreement, was not a component of the city Department of Education’s reopening plans.

Details of the new reopening plan include:

De Blasio described the delay as “a revision that still allows us to keep things moving forward on a tight timeline but with additional preparation time.”

“It’s very clear to every school now. These are the supplies and equipment every school has to have, here are all of the procedures on how [reopening] works inside schools,” Mulgrew said during the news conference with the mayor. “We could say that you need to use social distancing, but how many entrances are you using, which way are you moving people in and out, when is bathroom time? Those have to be figured out on an individual level, but we have a definitive list of what those are.”

Also see: This university created its own COVID-19 test and is testing students twice a week

The UFT did not immediately respond to a request for comment on the city’s latest steps, but released a fact sheet stating that school buildings that fail to meet safety requirements will remain closed.

Mulgrew also lashed out at federal officials’ overall response to the pandemic, saying, “The federal government completely failed to act yet had no qualms about standing up at press conferences saying how important it was for the schools to open. Shame on all of them.”

Currently, more than one-third of the city’s 1.1 million public school students have chosen remote learning, with the option to enroll in blended classes in November. For the students planning to return to school, the mayor urged parents to “have their children tested in advance of the start of classes.”