‘They have a right to do that’ 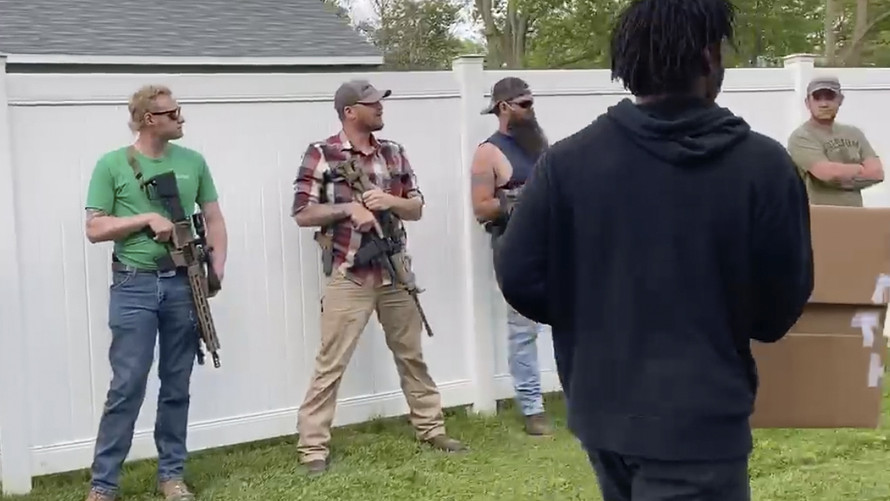 Associated Press
Image from video provided by Alissa Murray shows demonstrators protesting police brutality and racism encountering a line of armed bystanders as they march in Crown Point, Ind., on May 1.

Protesters in a northwest Indiana city who took to the streets to condemn racism and police killings of black people encountered bystanders who were holding rifles during the demonstration.

A video that circulated on social media shows 21 people standing along a bike trail near downtown Crown Point, Ind., watching protesters march past them Monday during a peaceful protest against police brutality and racism. Eight of the bystanders held firearms, an act Crown Point Police Chief Pete Land said is protected under state law.

“There were individuals — not related to a police department, just private citizens — that had their personally owned rifles displayed,” Land said Tuesday during a virtual city forum. “They have a right to do that.”

It is legal in Indiana to carry a rifle or a shotgun, but a permit is required to carry a sidearm in public, Land explained.

The protest on Monday drew dozens of demonstrators against the killing of George Floyd, a 46-year-old black man who died May 25 after pleading for air while a white Minneapolis police officer pressed his knee into Floyd’s neck.

Cedric Caschetta, who attended the nearly three-hour protest said some people stood on the opposite side of the street where the protest began and tried to antagonize them. Caschetta, 20, said the opposition crowd shouted, “Get a job,” “You don’t belong here” and “You’re the problem.”

Caschetta, who’s black, noted that he understands people’s Second Amendment rights but that the type of firearm the bystanders carried was excessive.

“Their message was intimidation, protection,” said Caschetta, a junior at Elmhurst College in suburban Chicago who lives in Lowell, Ind.

“[We] made sure their message got out. We agreed with their message,” Land said. “Crown Point is not Minneapolis.”

“It was a peaceful demonstration. They were allowed to be out there,” Uran said during a virtual city council meeting on Monday hours after the protest. “The tone was set very early that this was gonna be very peaceful.”

In Indianapolis, a police department official said the agency is investigating the actions of several officers captured on video during a demonstration Sunday using batons and pepper balls to subdue two women.

The video, posted on Twitter and Facebook, shows a black woman, who was being held from behind by a white, male officer, escaping his grasp and then being surrounded by several other officers. There are audible pops heard and the video shows several dust clouds, believed to be pepper balls, near the woman. It also shows two officers strike her with batons until she falls to the ground. The video also shows her being held face down against the pavement with a baton at the back of her neck.

A second woman, who is white, is seen and heard shouting, “Why her? Why her?” Another officer rushes the second woman, shoves her to the ground, where she is subdued by officers. The video does not show what led to the incident.