Investors, prepare to be disappointed

This market has been living in a fantasy world. Encouraged by the 2013 end-of-year melt up, complacency is everywhere you look. I can't say I blame them. However, earnings season may be ready to bring investors back to Earth.

Right now, the combination of cheap money, a quiet geopolitical situation, a temporary ceasefire in the budget battle out of Washington, and above all, the ability of executives to boost earnings per share by leveraging up balance sheets with new debt to fund share-repurchase programs, has whipped bullish sentiment to historic levels.

Retail investors are in, pouring cash into stocks for the first time since the financial crisis. Sentiment surveys reveal the most lopsided relationship between bulls and bears since before the 1987 market crash. Margin debt is at record highs. Available cash is essentially nil. And expectations for the future feels a lot like all those overly optimistic home price forecasts in 2005 (like when outgoing Federal Reserve chairman Ben Bernanke told CNBC that home prices were unlikely to fall on a nationwide basis.)

But each pillar of the bull thesis is getting knocked out, one by one. And that's why the market is getting wobbly.

The Federal Reserve is pulling the plug and beginning to wean this market off of its cheap-money stimulus. The taper has begun, and is likely to continue despite last Friday's surprisingly bad payroll report and drop in the unemployment rate to 6.7% (driven by labor-force withdrawals).

Federal Reserve Bank of St. Louis President James Bullard (considered a policy dove) chimed in that the current focus of the Fed is on the 6.7% unemployment rate rather than the weak jobs growth number and that continued tapering is likely at the next policy announcement on Jan. 29.

Federal Reserve Bank of Richman President Jeffrey Lacker (considered a policy hawk) warned investors not to overreact to one month's data as a general principle, adding it takes a few quarters of data to determine any sustainable change in trends. He also expects another $10 billion taper at the January Fed meeting.

And on Monday, Federal Reserve Bank of Atlanta President Dennis Lockhart (a moderate) said he continued to support a $10 billion-per-meeting tapering pace throughout the remainder of 2014 as long as the economy doesn't hit a wall.

After shrugging off the "taper on" decision last month, stocks are awakening to the fact that the firehouse of liquidity is being shut off as the Fed realizes the stimulus, at this point, is creating more risks than benefits (as highlighted by the contents of the latest meeting minutes).

Another source of sad faces will be the roll out of fourth-quarter earnings. Alcoa /zigman2/quotes/200686102/composite AA -2.94%   started reporting season off on an inauspicious note last week by reporting a bottom-line miss despite the earnings-per-share number being chock full of special one-time items. On a GAAP basis, removing these special items, the company lost $2.19 per share. Shares were pummeled as a result.

This looks like it will be the story of fourth-quarter earnings season, how lofty investor and analysts expectations will need to come back to reality via lower share prices and diminished forward estimates as corporate profit margins come under pressure (the labor market is actually pretty tight, pushing up unit labor costs above the pace at which companies can raise prices) and the ability to fund share repurchases with new bond floats is limited by the weakness in the fixed income market as the Fed tapers.

Executives have been desperately trying to lower the bar. There have been 108 negative earnings-per-share pre-announcements vs. 11 positive ones for S&P 500 companies heading into the fourth-quarter reporting season. That's a record.

Yet consider that analysts of S&P 500 companies have raised their price targets more than they've lowered their price targets on a scale not seen — and only very briefly — back in January 2011 before a year of stock market volatility that was capped by the August 2011 credit-downgrade washout.

This is just another sign of how entrenched and complacent the bulls have become. 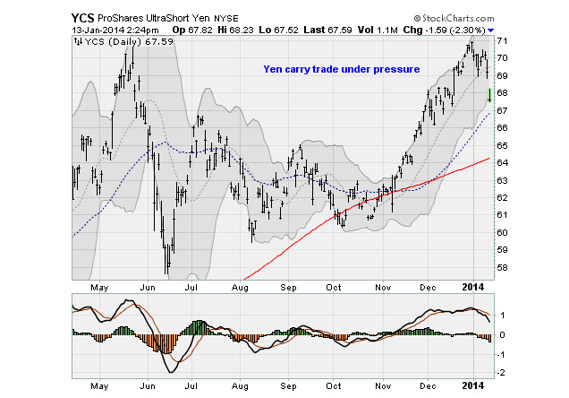 And finally, on a more technical level, a breakdown seems to be underway driven by a washout in the "yen carry trade" — the currency trade that many hedge funds have been using to pour extra liquidity into U.S. stocks. As long as the Japanese yen was weak vs. the dollar and the euro, the trade worked. But it because so crowded that stocks would follow the yen currency pairs tick for tick during trading as computers adjusted positions by the microsecond.

This enabled the end-of-year melt up to new record highs, despite the fact that market breadth has been contracting for months as fewer and fewer stocks participate to the upside. 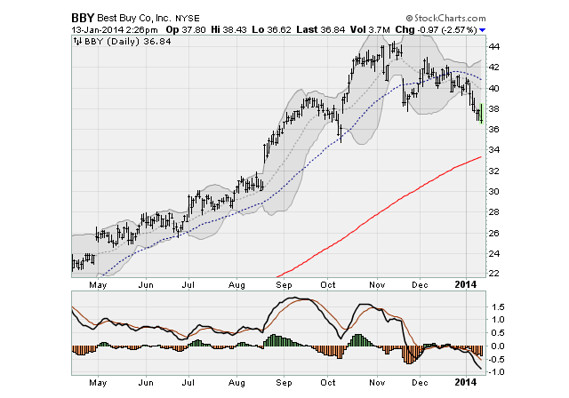 But new opportunities are popping up. Treasury bonds are rallying in a meaningful way for the first time since last April. I've added the Direxion 3x Treasury Bond Bull /zigman2/quotes/209018185/composite TMF -1.68% to my Edge Letter Sample Portfolio in response. Precious metals are also on the move, with the ProShares Ultra Silver /zigman2/quotes/207466305/composite AGQ -0.56% up 7% since I added it in December. Mining stocks including AuRico and Allied Nevada are on the move, too.

If you're determined to stay long, then focus on biotechnology where a few high-beta stocks are taking flight, including Rosetta Genomics , which is up 21% since I recommended it last week to clients.