Joe Biden is poised to become the nation’s next president after campaigning on an ambitious domestic agenda. 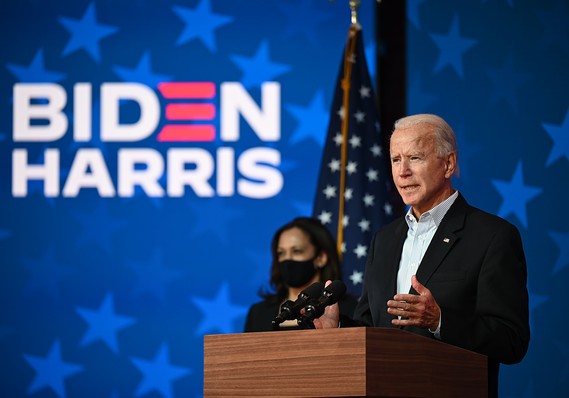 Joe Biden was projected Saturday to become the nation’s next president, according to the Associated Press, after campaigning on an ambitious domestic agenda he hopes will improve voters’ finances and invigorate an economy battered by the coronavirus pandemic.

Tax hikes for the rich, broadened health care coverage and student loan forgiveness were some of the projects on candidate Biden’s to-do list.

“I sought this office to restore the soul of America, to rebuild the backbone of this nation, the middle class,” Biden said in a Saturday night victory speech that listed many challenges ahead, like “the battle to control the virus, the battle to build prosperity, the battle to secure your family’s health care.”

Turning though visions into laws, as the president, will be the trick now.

The Democratic challenger unseated President Donald Trump, but the majority party in the Senate is an unanswered question. Both parties have 48 seats now and races in Georgia, North Carolina and Alaska were still undeclared as of Saturday morning.

If Republicans maintained control, their opposition could scale down Biden’s plans. A Biden presidency and Republican Senate would confine a second stimulus to around $500 billion, one investor note said.

If Democrats take control, it won’t be by much. It currently takes 60 votes to wrap up debate on a bill and end a filibuster , a move to delay or prevent a vote on a bill, where passage then just requires a simple majority.

So what does that all mean for financially struggling Americans?

Biden will have to pare back his legislative agenda without Democratic majorities in both chambers, said Stephen Myrow, managing partner of Beacon Policy Advisors, an independent policy research firm advising institutional investors. But Biden still has ways to aid families eyeing their budget now through executive action, he added.

‘All these things are incremental steps that add successfully to real change and to remake the economy in a more progressive image.’

Biden, for example, can try influencing Federal Reserve policy to close income inequality, or he can set a tough antitrust priority to ensure consumers aren’t hit with unfair prices. “All these things are incremental steps that add successfully to real change and to remake the economy in a more progressive image,” Myrow said.

Some Democratic Senators have previously said the president can cancel student debt without congressional action.

Indirectly, a Biden administration and a Republican Senate could actually give a dose of certainty for companies considering more hires in the future. In a divided government, Myrow said they won’t have to worry about facing a new set of tax laws. The stock markets already appear to be noting this prospect.

Biden is sworn in Jan. 20, 2021, less than a month after a range of moratoriums and programs protecting cash-strapped consumers are due to end on Dec. 31, 2020.

Newly reelected Sen. Mitch McConnell, the current majority leader, said Wednesday he would like to strike a deal on a new rescue package before the end of the year after the $2.2 trillion CARES act in March.

The CARES act ‘was the best thing we’ve ever done for low-income families during an economic crisis and it’s not even close.”

Luke Shaefer, a public policy professor at the University of Michigan and director of the school’s interdisciplinary Poverty Solutions initiative.

The initial stimulus plan was “the best thing we’ve ever done for low-income families during an economic crisis and it’s not even close,” said Luke Shaefer, a public policy professor at the University of Michigan who heads the school’s interdisciplinary Poverty Solutions initiative.

With the U.S. hitting record daily COVID-19 case counts, more public health steps like shutdowns may be necessary, Shaefer said. “It’s quite clear we’re going to need another economic stimulus to help families at this time” to soften the economic consequences of more shutdown orders, but the prospect of divided government makes Shaefer nervous on “what it means for whether we get another meaningful stimulus.”

If 2020 has any lesson, it’s that a lot can change in a little amount of time. So the exact sort of Biden administration actions might be uncertain, but here’s what we know the president-elect has been pledging on the campaign trail.

Biden says America’s corporations and its wealthiest citizens need to pay their “fair share” of taxes. Some well-heeled Americans have already been planning for that scenario.

Biden is proposing to raise the income tax rate to 39.6% from 37% for people making over $400,000 annually. That sets the top rate back where it was during the Obama administration.

Biden would also set the corporate income tax rate at 28%, from the current 21%. The rate at the end of the Obama administration was 35%.

Biden hasn’t called for an additional “wealth tax” which was something several Democratic primary rivals to his left advocated during the primaries.

Biden wants to change the tax rules surrounding capital gains and inheritances. People making more than $1 million will have their capital gains taxed at their ordinary income rate, 39.6%, according to his plans.

The 40% estate tax would also apply a lot sooner. The 2017 Tax Cuts and Jobs Act increased the exemption level to estates below $11.4 million for individuals and $22.8 million for couples. The Trump administration law raised the exemption from $5 million and Biden says he wants to bring it back to “historical norms.”

Biden could get some traction on a larger child tax credit. Trump doubled the credit to $2,000 in his tax bill and Biden called for a $4,000 credit. Speaking before the election, Sen. Rob Portman, a Republican from Ohio, said there could be bipartisan agreement on some type of expansion.

While the Obama administration passed the Affordable Care Act (ACA), Biden says he wants to build on the program.

Biden would add a public option to the ACA. People below a certain income who live in states that didn’t expand Medicaid would be automatically installed in the public option with no premium, according to the Kaiser Family Foundation . Biden would also lower Medicare eligibility to age 60 from age 65.

He would also overhaul rules and expand eligibility on the tax credits meant to defray health insurance costs. Also on costs, Biden says he’ll prevent people from getting blindsided by massive medical bills.

The president-elect is planning to build on the program, but the Supreme Court is hearing Nov. 10 oral arguments where the Trump administration and Republican-leaning states argue the Affordable

The Biden administration can’t stop a challenge to the ACA in the Supreme Court, but it could, in theory, now argue to uphold the law.

Care Act should be voided altogether because of an individual mandate with a $0 penalty.

The Biden administration could, in theory, turn around and defend the ACA but it cannot make the case go away, according to Allison Hoffman, a University of Pennsylvania Carey Law School professor teaching health law. The Republican-leaning states would still be pressing the case, she noted. The Biden administration would need court permission to file new court papers arguing for the ACA, Hoffman said.

Biden could enact laws potentially fixing the ACA’s alleged defects in the individual mandate and making the case a moot point, Hoffman noted — but that would require law changes which, conceivably, only a Democrat-controlled House and Senate would pass.

Any Biden housing plans come amid a potential eviction crisis. Approximately 1.3 million renter households will be behind on rent by December, according to the Federal Reserve Bank of Philadelphia. That about 2.8 million adults and 1.1 million children. These tenants will owe $7.2 billion in rent, which averages $5,400, researchers projected.

Ahead of the pandemic, Biden said he would strengthen tenant protections and enact a homeowner and renter bill of rights.

See also: Landlords are still evicting tenants even though there’s a national ban on evictions — how renters can protect themselves

Biden wants to make the financial commitment less daunting for first-time homebuyers with a refundable $15,000 tax credit. Likewise, the president wants to add more housing benefits for people working in the public sector, such as teacher and first responders.

The president-elect has also pushed a tax credit for renters. The credit would reduce housing costs to a maximum 30% of household income for people who do not qualify for Section 8 vouchers offsetting rental costs.

Even before the pandemic, Americans’ $1.6 trillion in student loan debt was a financial crisis that chipped away at borrowers’ capacity to buy homes, start families or pursue the careers of their choice.

Biden is proposing to cancel $10,000 of a borrower’s student loans; the debt forgiveness would erase loan balances for 30% of borrowers, according to one analysis. Biden would also overhaul a debt forgiveness program that, critics say, has helped too few public sector workers.

The president’s Education Secretary has ‘specific and unrestricted authority’ to modify or cancel federal student loan debt, some attorneys say.

Biden also says families making less than $125,000 shouldn’t have to pay for their child’s education at a public college. This would apply to approximately 80% of families, his campaign has estimated.

Though the plans for free public college would require new laws, Sens. Chuck Schumer and Elizabeth Warren have said the president can cancel debt by himself. Some education law experts say the same. Lawyers at Harvard Law School’s project on Predatory Student Lending have previously said the president’s Secretary of Education has “specific and unrestricted authority to create and to cancel or modify debt owed under federal student loan programs in the Higher Education Act (HEA) itself.”