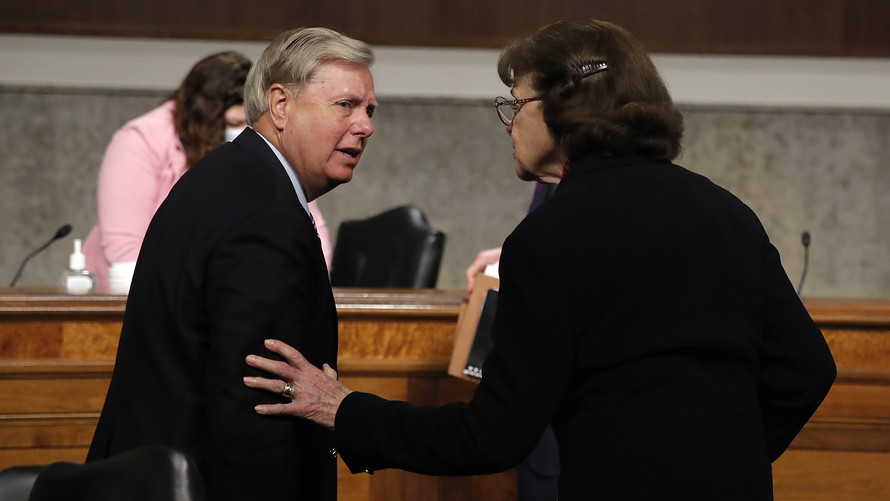 Associated Press
Lindsey Graham, the South Carolina Republican chairman of the Senate Judiciary Committee, talks with Sen. Dianne Feinstein, the California Democrat who is the committee’s ranking member, after a meeting on the authorization of subpoenas relating to the Crossfire Hurricane investigation of Russian interference in the 2016 election and any Trump campaign collaboration.

WASHINGTON (AP) — The Senate Judiciary Committee swiftly moved forward on Thursday with its investigation of the Justice Department’s Russia probe, voting to allow dozens of subpoenas over Democratic objections that the move was chiefly an effort to support President Donald Trump’s re-election.

Sen. Lindsey Graham, the committee chairman and a close ally of the president, was defiant as he held the vote. The committee rarely moves forward on subpoenas without bipartisan support, and hasn’t done so in more than a decade. Democrats said the move could affect relations on the panel for years to come.

“You are trying to stop me from doing something I think the country needs to do, and I’m not going to be stopped,” Graham said, responding to the committee’s top Democrat, California Sen. Dianne Feinstein. Feinstein, a longtime member of the committee who has often worked with Republicans, had said she never thought the committee would reach the point where they couldn’t agree on subpoenas.

The vote empowers Graham to issue more than 50 subpoenas of current and former Justice Department officials. Graham said the panel would be looking at how the department went “so off the rails” as it investigated Trump and his campaign for almost three years.

Republicans have turned their attention to a report by the Justice Department’s inspector-general last year that found errors and omissions in the applications the FBI submitted to conduct surveillance on a former Trump campaign aide in the early months of the investigation, though it determined the investigation was conducted without bias. Republicans, and Trump himself, have repeatedly said they believe the department was conspiring against the president before and after the election.

Democrats on the committee offered multiple amendments before the subpoena vote, many of them encouraging Graham to call witnesses who were involved in Trump’s campaign. The Republican-majority panel turned back each one.

Graham has said he also wants to look into the case of former national-security adviser Michael Flynn, who admitted lying to the FBI about his conversations with the Russian ambassador during the presidential transition period regarding U.S. sanctions. After earlier prosecuting Flynn, the Justice Department reversed itself and moved to dismiss the case last month, saying that Flynn’s contacts with the diplomat were appropriate and that the FBI had insufficient basis to interview him.

Democrats have argued that the errors in the surveillance do not invalidate the Russia investigation, which ultimately found that Russia interfered in the 2016 presidential election but found insufficient evidence to establish a criminal conspiracy with Trump’s campaign. The internal Justice Department report said the FBI was justified in opening the investigation and found no evidence that it acted with political bias.

Sen. Chris Coons, D-Del., said the authorization for subpoenas won’t fix flaws with the surveillance, “and will not overturn the results in the Russia investigation, or change the IG’s conclusions.”

Graham’s investigation is one of several diving into the Russia investigation, a subject that has followed Trump throughout his presidency. The Justice Department has its own internal probe separate from the inspector general’s investigation, and the Senate Homeland Security and Governmental Affairs Committee is also looking at the matter. That panel approved its own subpoenas last week as Democrats and even some Republicans encouraged the committee’s chairman, Wisconsin Sen. Ron Johnson, to focus on other issues such as the coronavirus pandemic and the economy.

Democrats on the Judiciary Committee offered multiple amendments before the subpoena vote, many of them encouraging Graham to call witnesses who were involved in Trump’s campaign. The GOP-led panel turned back each one, with Graham saying that special counsel Robert Mueller already had two years to investigate what happened in 2016. He said he would be willing to call Mueller himself to testify, or one of the prosecutors who worked with him, if Democrats wanted.

“I promise you, you will have your say,” Graham said to the Democrats.