The government has reopened. A catastrophic debt default was avoided. And America's somewhat diminished credit rating remains intact (save a downgrade from the Chinese, which doesn't really count).

And thanks to constant reassurances from Federal Reserve officials, and Tuesday’s weaker-than-expected payroll gains, it doesn't look like the ongoing $85 billion-a-month quantitative-easing (QE) stimulus is going to be slowed anytime soon. Wall Street increasingly doesn't expect the much-discussed and much-feared "taper" until sometime in early 2014. And even that depends on Republicans and Democrats coming together by January to forge a long-term budget deal and prevent another shutdown showdown.

But the casualty in all this has been the U.S. dollar, which has fallen out of its two-year trading range and now threatens to return to its 2011 lows.

That's both good and bad news. 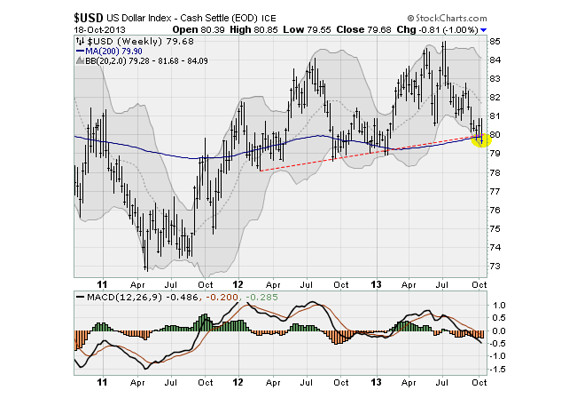 The bad news is that, if you remember, the dollar's 2011 plunge was associated with a surge of inflationary pressures as higher commodity prices and crude oil at $115 a barrel pinched consumers and forced the Federal Reserve to stop its QE2 bond-purchase stimulus. That inflationary surge — and the August 2011 debt-ceiling fight that followed — combined to slam the brakes on the global post-recession economic surge.

A surge of inflation now would force the Fed to taper QE3 faster than investors expect and would rattle a market that's grown complacent thanks to a steady drip-drip of cheap-money morphine.

Although crude oil isn't doing much right now, I'll be keeping an eye on import price inflation to gauge whether or not the inflationary threat is materializing. With China's currency strengthening as ours weakens, all those goods coming in from the Middle Kingdom will start getting more expensive.

The good news is that as the dollar weakens and China's yuan rises, it boosts the export competitiveness of America's products. As the dollar fell from its July high, down 6.2%, the contribution from exports toward GDP growth has bounced to levels not seen since 2010 — which was also a period associated with a significant weakening of the greenback. 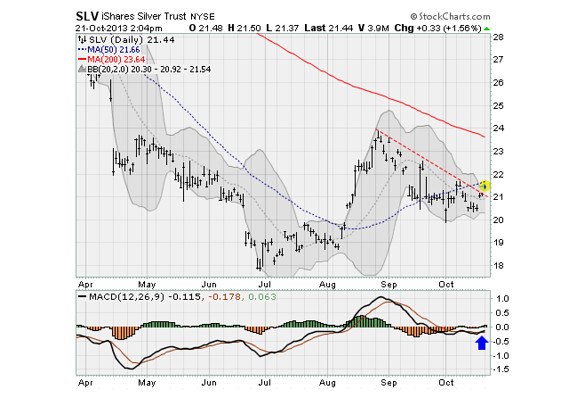 For investors, the dollar's slide is creating opportunities in beaten down areas like precious metals and industrial metals. Both the SPDR Gold Trust /zigman2/quotes/200593176/composite GLD -2.50% and the iShares Silver /zigman2/quotes/205744453/composite SLV -4.64% have moved over their 20-day moving averages for the first time since August. Copper, represented by the iPath Copper /zigman2/quotes/204707057/composite JJC -0.76% , looks ready to punch out of a three-month pennant formation.

Individual stocks in this area, including IAMGOLD /zigman2/quotes/209642463/composite IAG -3.97% , also look ready for powerful moves higher. If IAG can merely return to its August high, it would be worth a 40% move from here. I've added IAG to my Edge Letter Sample Portfolio , where you can track the recommendations made in my blogs and columns.

Disclosure: Anthony has recommended IAG to his clients.