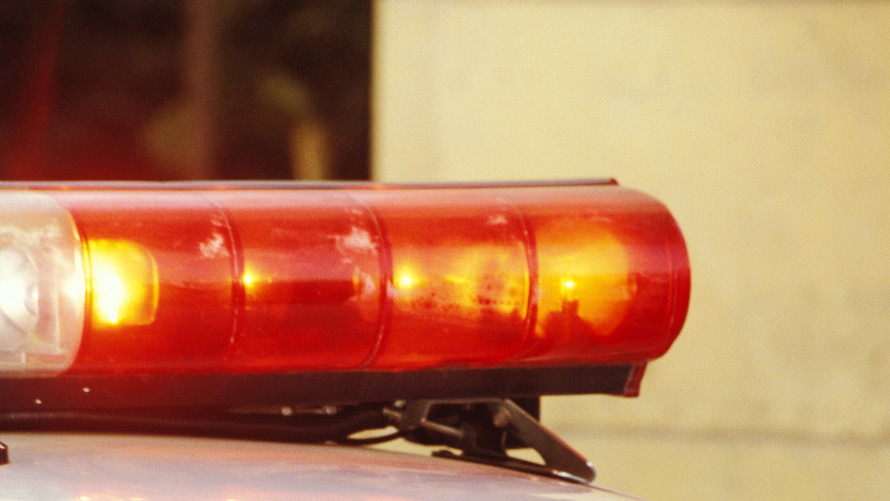 A red flag in the U.S. stock market may actually be a red herring.

Investors are increasingly wondering whether Wall Street could be headed for a pullback, with valuations elevated and high levels of policy uncertainty, but an historical cause for concern—underperformance in small-cap stocks—may be a false alarm this time.

Smaller companies have struggled thus far in 2017, and while they are modestly positive on the year, broader equity gains have been led by the market’s largest companies, leading to a sharp divergence among the performance of various market cap segments.

Smaller companies tend to be more growth orientated than the relative value tilt of their larger peers, which are often more established and multinational in reach. As a result, small companies tend to be more sensitive to the pace of economic growth, and weakness in the category is sometimes viewed as presaging a broader decline. However, that may not apply this time around.

“Of course small caps and large caps are going to trade places in who leads the market from time to time, but I would disagree that the rally in small-caps is over,” said Jeff Mortimer, director of investment strategy for BNY Mellon Wealth Management, who said his firm was “overweight the U.S. over other markets, overweight equities over bonds, and overweight small caps over large.”

“If large outperforms for six months, let it,” he said. “Small will come roaring back. If you trade based on one month’s move you’re always going to be chasing something’s tail.”

The divergence has been particularly stark since the election, with smaller names outperforming as investors bet they will benefit from having a less-diverse geographic footprint. In addition to benefitting from President Donald Trump’s expected policies on taxes and regulation, their U.S.-focus could isolate them from any risks arising from isolationist trade policies, global geopolitical turmoil or a stronger U.S. dollar, which erodes the profitability of multinational firms. 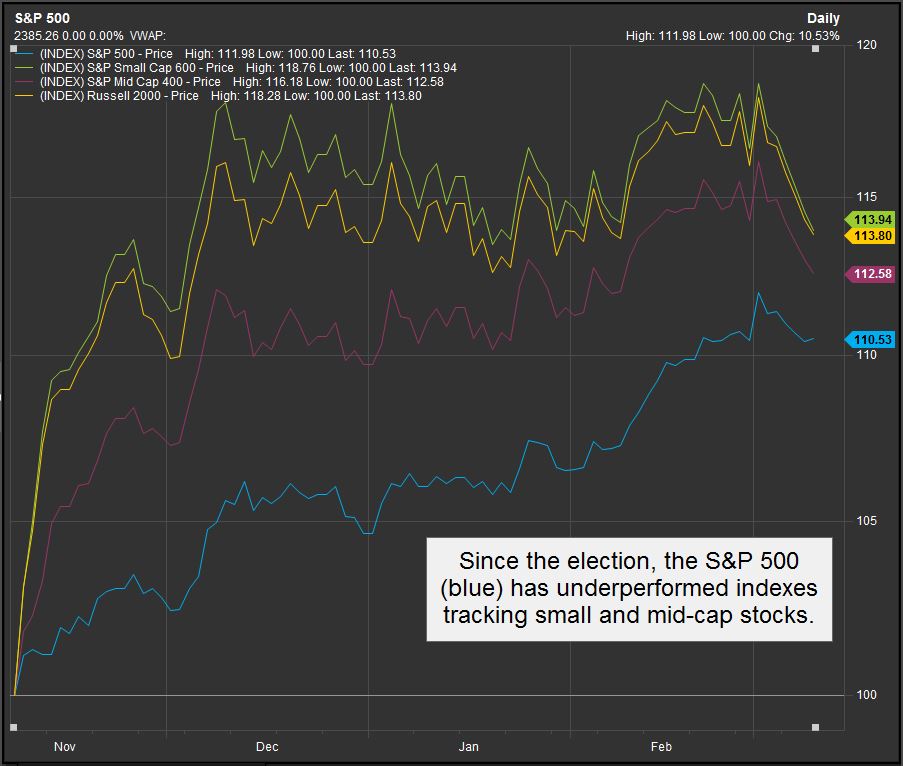 Christopher Gannatti, associate director of research at WisdomTree, said that the new administration could continue lifting small-cap stocks. In addition to being insulated from the currency impact of a stronger dollar, the category could see a disproportionate boost from lower corporate taxes.

“If there is corporate tax reform, we’ve found that small-cap stocks do in fact tend to pay higher effective tax rates than large-cap stocks,” he wrote in a note to clients. “If the statutory rate for U.S. corporations is lowered from the current 35% to 25% (or lower), the biggest incremental impact could hit profitable, small-cap companies.”

“We believe further interest is justified” in small-caps, he added.

To be sure, even if small-cap performance isn’t signalling a correction, that doesn’t mean that the deceleration is over. JonesTrading noted that the number of speculative longs in Russell 2000 futures contracts had been declining since the first week of the year, when they hit an all-time high. 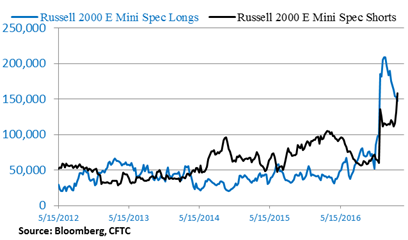