Biden’s $1.9-trillion COVID-19 rescue plan is a ‘lifeline’ for millions of Americans

President-elect Joe Biden said he will call for $1,400 stimulus checks and more vaccine funds in a new coronavirus economic relief package when he takes office this month

‘President-elect Biden’s relief and recovery proposal would be a lifeline to workers and their families.’

Josh Bivens, director of research at the EPI

President-elect Joe Biden said he will call for $1,400 stimulus checks and more vaccine funds in a $1.9-trillion coronavirus economic relief package when he takes office this month.

Analysts say that after the proposal, which was released this week, is debated in Congress, the final COVID-19 rescue package is unlikely to be as generous as currently proposed, but analysts say it couldn’t have a come a moment too soon for millions of Americans.

The government’s unemployment rate hovered at 6.7% in December, and the number of unemployed workers was 10.7 million.

However, the Economic Policy Institute, a progressive think tank, argues that a breakdown of Bureau of Labor Statistics figures and other estimates based on those paint a far bleaker picture due to the business closures and public health restrictions related to the COVID-19 pandemic.

It estimates that approximately 26.8 million workers are being negatively affected — or nearly 16% of the workforce.

This figure, it said, includes those who are miss-classified as “employed, not at work” instead of unemployed (1 million), the number of officially unemployed people who have been undercounted (2.7 million), those who dropped out of the labor force (4.9 million) or are employed but experiencing a drop in hours and pay (7.5 million).

“President-elect Biden announced a proposed relief and recovery package that provides relief that is commensurate with the scale of the economic challenge facing the United States, due to the harm caused by the COVID-19 pandemic,” said Josh Bivens, director of research at the EPI.

“The urgent economic priorities facing the nation are simple: Get control over the spread of the virus and then ensure that U.S. households, businesses, and governments spend and invest enough to radically reduce unemployment and boost workers’ wages,” Bivens said.

“The Biden package ticks these boxes,” Bivens added. “The continuation of enhanced pandemic-related unemployment-insurance programs, the substantial fiscal aid to state and local governments, the investments in virus control and mitigation, and the increase in the federal minimum wage to $15 an hour are all absolutely essential for rapid relief and a fast and equitable recovery.”

Some 1.2 million people applied for unemployment insurance benefits last week, up 304,000 on the previous week; that included 965,000 people who applied for regular state benefits and 284,000 who applied for pandemic unemployment assistance. Last week was also the 43rd straight week in which total initial claims were greater than in the worst week of the Great Recession.

As of Saturday, COVID-19 had infected over 94.6 million people worldwide, which mostly does not account for asymptomatic cases, one of the major ways the virus has spread around the world so quickly, and killed over 2 million, including 395,855 in the U.S.

The U.S. has the world’s highest number of COVID-19 cases (23.8 million), followed by India (10.5 million), Brazil (8.4 million) and Russia (3.5 million), according to data aggregated by Johns Hopkins University.

The Biden plan would serve as a lifeline, said Bivens.

Republican lawmakers advocating more restraint have signaled concern about federal budget deficits and say low interest rates obviously won’t last forever, while commentators have lamented the need for such a massive stimulus in the first place.

The EPI estimates that 26.8 million workers are being negatively affected — or nearly 16% of the workforce.

“The plan outlined by the president-elect is ambitious and costly, but that cost must also be viewed in the context of the combined tolls of the still raging pandemic and resulting economic damage,” Mark Hamrick, senior economic analyst at Bankrate.com, said. “In failing to contain the health crisis, the economic crisis has been both lasting and deep.”

The job losses shown in the December employment report and a “heightened level of new claims for unemployment benefits and actual benefits being received all underscore the need for an extension of aid,” Hamrick added. (A recent Bankrate survey found that only 39% of Americans would or could pay an emergency expense of $1,000 or more from savings.)

Economists Peter Orszag, Robert Rubin and Joseph Stiglitz wrote in a joint paper for the Peterson Institute: “Because a robust economy benefits lower-income groups the most, particularly those previously marginalized, one should wait for more compelling evidence that further fiscal stimulus is not needed before enacting the offsets.”

“We propose a new approach in which fiscal discretion is retained but exercised after making the budget adjust more automatically and rapidly in areas where there is broad consensus that doing so is consistent with achieving broader societal goals,” they added.

For its part, the Trump White House has pointed to states’ efforts to contain the coronavirus and shuttering of businesses as the reason for the job losses in a statement released on Monday.

“As witnessed in the early days of the pandemic, employment in the leisure and hospitality industry fell by almost 50% between February and April, while employment in all other industries fell by a much smaller but still substantial 10%,” it said.

Maya MacGuineas, president of the Committee for a Responsible Federal Budget, a bipartisan fiscal watchdog, told CNN : “It seems quite premature to say we need another $2 trillion now given what we just passed,” but she added “we probably need to do more borrowing before it’s time to pivot away.”

People are, of course, suffering economically. At the height of the pandemic in March, more than 30 million Americans were laid off or furloughed when the economy shut down to curb the spread of COVID-19. The unemployment rate at that point was 14.7%; it has since come down to 6.7%. The leisure and hospitality industries have been particularly hit hard by the pandemic.

The Dow Jones Industrial Average /zigman2/quotes/210598065/realtime DJIA +0.77% , S&P 500 /zigman2/quotes/210599714/realtime SPX +0.95%  and Nasdaq Composite /zigman2/quotes/210598365/realtime COMP +1.30%  had a tumultuous 2020, and were lower Friday as investors effectively sold the news of Biden’s more generous stimulus proposal, which had been widely anticipated. The market was also dampened by worries over the potential for tax increases and increased risk of more political unrest after last week’s siege on the U.S. Capitol by supporters of President Donald Trump.

President-elect Biden is calling on Congress to provide the $160 billion for a national vaccination program.

Analysts expect the markets to react positively to the news of Biden’s rescue plan on Friday. “To support the spending and investment needed to fully repair the labor market, we estimated in early December that roughly $3 trillion was needed,” Bivens added.

“Less than one-third of this amount was included in the end-of-year recovery package, and the Biden administration’s proposal fills in the remaining amount. In short, it is a proposal that is driven by careful consideration of the evidence and is not artificially constrained by outdated fears about federal debt,” he added.

“This marks a welcome break from mistakes made in past downturns, such as the Great Recession. It is critical that the incoming Biden administration and Congress work to pass this important relief and recovery measure,” Bivens concluded.

Another factor buoying up markets. There has been progress on vaccines — which, assuming they work, could eventually bring people back to their place of work. President-elect Biden is calling on Congress to provide the $160 billion for a national vaccination program, “expand testing, mobilize a public health jobs program, and take other necessary steps to build capacity to fight the virus,” according to a statement issued Thursday evening by his transition team.

A vaccine candidate from AstraZeneca /zigman2/quotes/200304487/composite AZN +1.47%  and the University of Oxford also showed an average efficacy of 70% in a pooled analysis of interim data, according to a peer-reviewed study published last week. That’s about the same level of protection as a flu vaccine.

Biden, meanwhile, pledged to forge ahead with a massive stimulus package when he takes office in a government with a Democratic-controlled House and Senate.

“While Congress’s bipartisan action in December was a step in the right direction, it was only a down payment. It fell far short of the resources needed to tackle the immediate crisis,” the statement by his transition team added. “We are in a race against time, and absent additional government assistance, the economic and public health crises could worsen in the months ahead; schools will not be able to safely reopen; and vaccinations will remain far too slow.”

“As last month’s jobs report underscored, the virus and our economy are intertwined,” the statement announcing the $1.9 trillion rescue package added. “We cannot rescue our economy without containing this virus.” 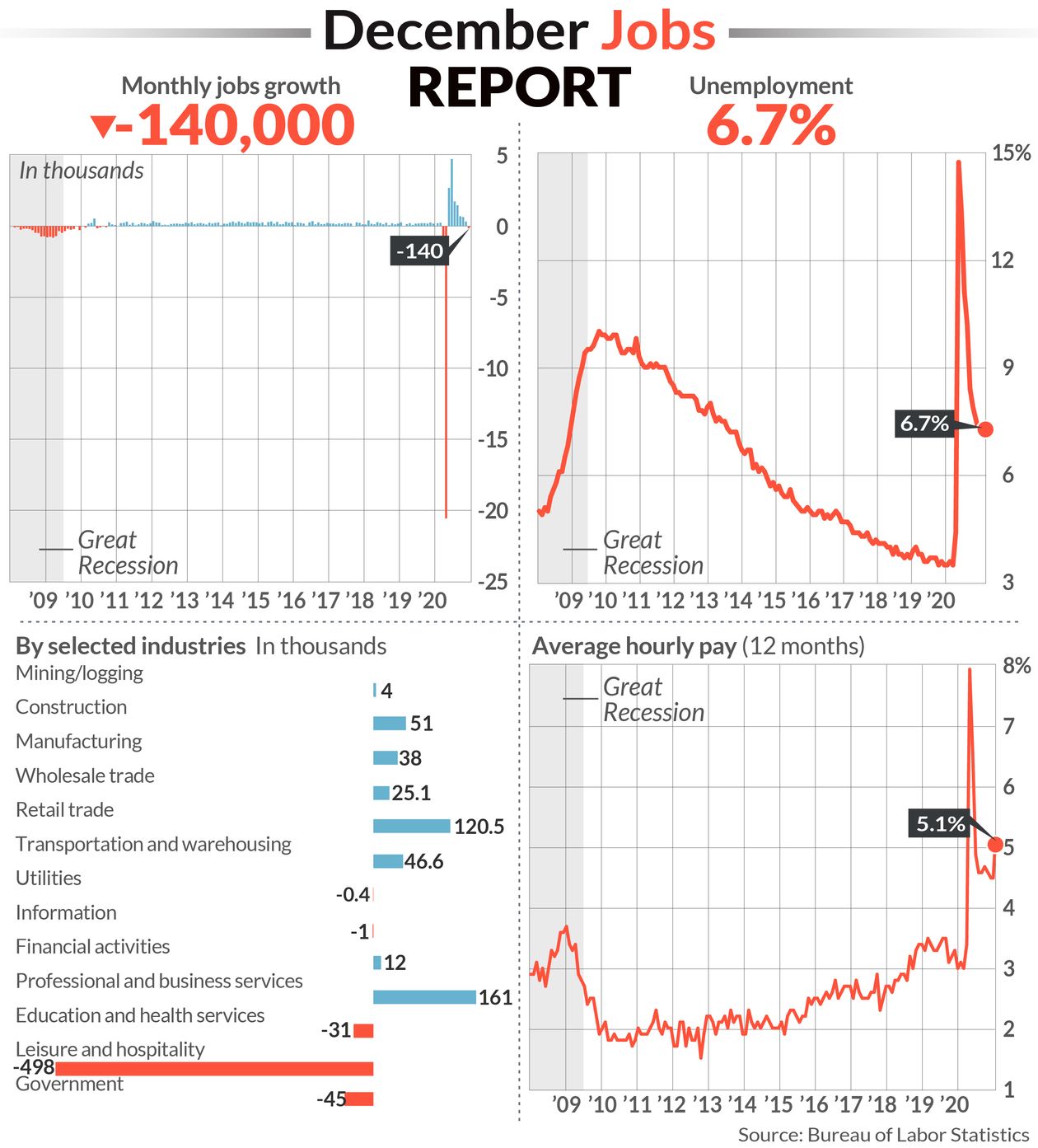