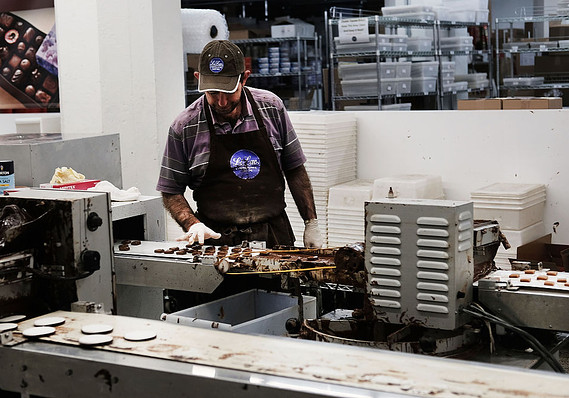 Getty Images
A man makes chocolate in a chocolate store in Industrial City, a historic shipping, warehousing, and manufacturing complex on the waterfront in the Sunset Park neighborhood of Brooklyn on October 4, 2016 in New York City.

Blame it on slow wage growth or rising rent or just changing preferences, but Americans just aren’t ramping up spending.

Retail spending fell 0.2% in June, and the 2.8% year-over-year growth was the slowest since August.

Can the hard-hit manufacturing sector come to the rescue?

Not totally, but at the very least, recent reports seem to indicate business spending at least will be a tailwind to the U.S. economy, at a time when Congress can’t push through stimulus and the Federal Reserve has been pushing up interest rates.

Last week, the Fed reported that industrial production rose for the fifth consecutive month in June.

The surprise boost seems in large part due to be the oil and gas sector. Triple-digit oil prices   may be a thing of the past, but they have stabilized. And as the sector becomes more productive, output has recovered.

Oil and gas drilling has more than doubled from its May 2016 low, the Fed data show.

In a relatively light week for economic data, reports on New York- and Philadelphia-area manufacturing sentiment are coming out. The New York report — called the Empire State manufacturing survey — did decline in July but still pointed to growth in sector.

The other key report will come from the housing sector, where housing starts are seen rebounding after a disappointing May.

At a time when builder confidence is booming and inventory low, it’s a little surprise why housing starts aren’t stronger.

Here’s how the CEO of Green Brick Partners /zigman2/quotes/203128968/composite GRBK +0.62%  , Jim Brickman, colorfully, if insensitively, described the situation to the Dallas Business Journal :

“The millennial workers are not coming into the industry because they’d rather make 50% less at Starbucks /zigman2/quotes/207508890/composite SBUX +2.03%  than work in a hardworking industry. The unskilled construction workers are making $17 an hour with electricians and plumbers making much more than that. Also, skilled construction workers are not coming from across the border (from Mexico) because it’s not worth it to them with the current presidential administration.”

Brickman says the industry is building less complex houses and doing things like color-coding bundles of lumber to get buildings up faster.