Millions of Americans are in ‘survival mode’ — beware, decisions made in this frame of mind can make or break you

‘Unfortunately, our ability to see the big picture is severely limited when we’re in fight-or-flight mode’ 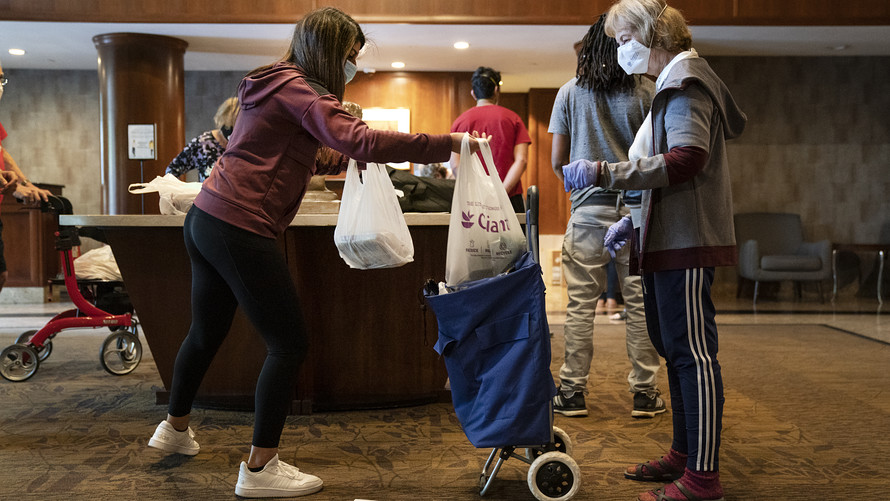 (Photo by Drew Angerer/Getty Images)
Around one-third of people in an new poll said they were concerned about increasing food costs.

The New Year is normally a time to launch long-term financial goals, but millions of Americans are taking it one day at a time.

On Thursday evening, President-elect Joe Biden said he will call for $1,400 stimulus checks and more vaccine funds in a $1.9-trillion coronavirus economic relief package when he takes office this month. One note of caution: Analysts say that after the proposal is debated in Congress, the final COVID-19 rescue package is unlikely to be as generous as currently proposed.

It could not come a moment too soon for millions of Americans. More than one-third, 38%, of people say they’ll be in “survival mode” in 2021, according to Fidelity Investments’ annual New Year Financial Resolutions Study.

Survival mode entails being focused “on the day-to-day as I try to get myself and/or my family through the next year,” the poll of more than 3,000 people said.

“Unfortunately, our ability to see the big picture is severely limited when we’re in fight-or-flight mode,” said Andy Baxley, a Chicago-based financial planner at The Planning Center.

“This can lead to choices that seem to make sense in the heat of the moment, but have the potential to cause significant harm in the long run,” he added.

Getting out of “survival mode” starts with trying to envision what your life will look like a year from now, and asking what changes need to happen to feel more secure, Baxley said.

“Next, I encourage people to think of one thing that is relatively easy to accomplish and will have a meaningful impact in moving them forward in the right direction. Sometimes, one small step is all it takes to start building momentum,” he said.

Who is in worse financial shape?

Nearly (23%) of poll participants said they either lost a job or household income, and 18% said they had to make an unplanned pitch for money from their friends and family.

Overall, more than two-thirds of the surveyed Americans had some type of 2020 financial setback, Fidelity said, and 34%, said their top financial worry was increasing costs on food and other necessities.

The findings add to the stack of polls and statistics indicating that, nine months into the COVID-19 pandemic, a quick recovery remains elusive for many.

For example, one quarter of the people felt they were in tougher financial straits in September than in March, according to an Urban Institute study released more than a month ago.

See also: Opinion: The K-shaped economic recovery: For half of America, the economy is still terrible

The deterioration was more pronounced for minority households, with more than one-third of Latino participants saying they were in a worse state.

Almost 30% of Black households said they were backsliding. More than 40% of people under the poverty line pre-pandemic said things were getting worse, the Urban Institute researchers noted.

But the sort of scraping-by “survival mode” discussed in the Fidelity survey is something that pre-dates the pandemic, the Urban Institute findings suggest.

“Even before the pandemic, many people were struggling to meet basic needs such as food, rent, and health care,” said Michael Karpman, senior research associate at Urban and lead author of the report.

“But the recession has hit hardest for people who were already struggling financially,” he added.

See also: The 245,000 new jobs added last month is smallest since U.S. recovery began in May

Fidelity’s findings come when many crucial financial safeguards, collection pauses and protections will go away by the end of the month, absent Congressional action.

‘Sometimes it’s just that forward momentum that gets you closer’

So if a cash-strapped person is going into a financial survival mode, what should they do to get to a better place?

Be okay with taking baby steps, like reaching out to a friend about a job prospect, brushing up a resume, or committing a personal budget to paper, said Meredith Stoddard, vice president, life events experience at Fidelity.

“Sometimes it’s just that forward momentum that gets you closer,” she said. While it’s “easy to get into worse-case scenario thinking,” Stoddard said it’s better not to get overwhelmed by emotion.

Don’t miss: ‘I’m terrified, frankly’: These people are depending on another stimulus bill to stay afloat

There’s 50% for necessities like mortgages and bills, 15% for retirement savings (counting in a 401(k) company match) and 5% for short-term savings, like an emergency fund. The remaining 30% would be for things like tax bills, charitable contributions and child care.

But the guideline are just “aspirational,” and should create more pressure, Stoddard said. “If you have just lost job or taken a pay cut, then the rules of thumb are meant to be general guidelines.”