Money alone won’t close America’s racial and wealth gaps — we first need to wipe out the value gap, ‘the belief that white people matter more than others’

An interview with Eddie Glaude Jr. on how the life and words of James Baldwin can help us make sense of 2020 America

We can’t just look for the loud racists, only paying attention to those folks who are screaming those ugly things, when in fact the value gap is reproduced in our daily choices, in the habits and the lies we tell ourselves.

MarketWatch: You say the value gap is “The Lie.” But what is the role of money here? How much of the struggle of Black America in 2020 is due to economics? The nation was founded on the insidious equation that a Black person is worth three-fifths as much as a white person. In 2020, however, the median Black household worth is one-tenth that of the median white household — if we could get to three-fifths that would be an improvement. So to make the point, if we reduce American society to a Monopoly board, while white players start the game with the usual $1,500, Black players get just $150. What are the odds one of those players would end up with Boardwalk and Park Place and win the game — some might, but it would be like hitting the lottery. Can the value gap even be addressed without first tackling the wealth gap?

Glaude: Stick with that Monopoly analogy. Yes, some start with $1,500, some start with $150, as you said, but some can’t even get past Go, because they are blocked. They aren’t going to get the $200. This has generational implications.

This is hard for us to think about as a society because we tend to think of racial justice as a zero-sum game. This idea that we have to take something from hardworking people and give it to people who are considered less hardworking.

MarketWatch: So the value gap cannot be eliminated by economic policy alone?

Glaude: Any economic system that is predicated on the disposability of people, Baldwin is going to reject it. I am going to reject it. So the way in which we reconcile this is not by simply appealing to markets that can drive up the standard of living of Black folk and create some kind of equity as a result. No, we have to change the fundamental center of gravity of our moral concern and how it organizes our lives.

Budgets reflect what and who we value. If we look at how resources are allocated in this country, it reflects what and who we care about. For me, for example, I can’t fathom an economic system that can produce a trillionaire.

We have to change, at the heart of it all, what we value. Once that happens markets can be deployed in ways to ensure the public good as we imagine it.

MarketWatch: Baldwin seems suspicious of the idea of progress. Is progress real? Is it even possible? 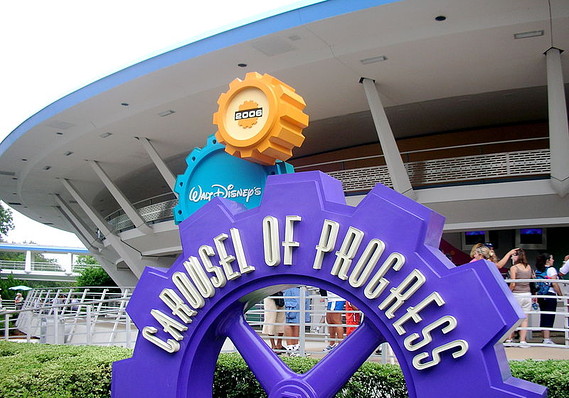 WikimediaCommons/Matt Wade Photography
The Carousel of Progress in the Tomorrowland section of the Magic Kingdom at Walt Disney World in Florida photographed in 2006.

Glaude: Baldwin has that line: “America is always changing and it’s never changing.”

That question around progress is part of our insistence on our innocence. “Haven’t we progressed?” is usually a question that is asking for congratulations and gratitude: Look where we are. You should be thankful.

Glaude: Yes, in some ways the country views racial justice as a philanthropic enterprise, as a charitable gesture. If racial justice is seen as philanthropic as opposed to a central understanding of who we take ourselves to be as Americans, we are still caught in the frame of the value gap, because some people see racial equality as theirs to give to others.

In the book, I use a quote from Baldwin’s “The Uses of the Blues”:

I’m talking about what happens to you if, having barely escaped suicide, or death, or madness, or yourself, you watch your children growing up and no matter what you do, no matter what you do, you are powerless, you are really powerless, against the force of the world that is out to tell your child that he has no right to be alive. And no amount of liberal jargon, and no amount of talk about how well and how far we have progressed, does anything to soften or to point out any solution to this dilemma.

Here I am a Princeton professor, right? Princeton Ph.D. and living quote-unquote the American Dream, and I still have to worry about that taking root in my child — progress? What the hell do you mean?

MarketWatch: You say Baldwin’s message is always one of love. But in “No Name in the Street,” he writes, “White Americans are probably the sickest and certainly the most dangerous people, of any color, to be found in the world today.” You echo that sentiment, writing, “In our after times, our task, then, is not to save Trump voters — it isn’t to convince them to give up their views that white people ought to matter more than others. Our task is to build a world where such a view has no place or quarter to breathe.” That doesn’t sound very hopeful.

Those people who are invested in this idea that the color of your skin ought to determine the distribution of advantage and disadvantage, those people have had the country by the throat from the beginning. What he is saying is that those of us who are committed to a more just world, not a more perfect union — that lets us off the hook, but a more just world — only have a finite amount of civic energy. And what we need to be doing is not try to convince those other folks who hold those noxious views, because what happens over and over again every generation is we end up compromising with them — compromises we have to bear the burden of. I don’t want to spend my energy trying to convince someone who thinks I am less than human — that I am not worthy of dignity — I don’t want to have that argument anymore, and that unsettles people.

MarketWatch: Baldwin said that “we can make America what America must become.” I have been thinking about that line as we see history rewritten, names changed and statues toppled. You say we need to tell a new story of America. But who should tell it?

Glaude: So the story we tell, we have to tell it together. It has to be a story of our contradictions and our sins as much as it is about our triumphs and aspirations. It is not to bludgeon ourselves with our failures but to confront what we have done.

The Confederate monuments are lies. The “Lost Cause” is a lie.

Truth becomes the basis of reconciliation. Baldwin says, you can’t do all of this damage and then claim innocence. That innocence is the crime.

(Footnote: Disney stopped updating the Carousel of Progress in 1994, though it continues to keep operating as a spinning time capsule. It is a nostalgia piece. In this series we will speak to leaders in business, policy, and academia to explore how America and its economy can avoid such a fate. Stay tuned.)

Jeremy Olshan is the editor of MarketWatch.