Wells Fargo fine ranks only behind Ocwen at CFPB 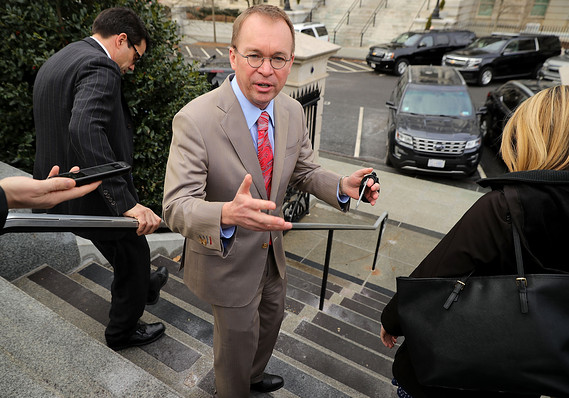 The $1 billion fine imposed by the Consumer Financial Protection Bureau, and first since Mick Mulvaney took over the agency, ranks as the second-highest in the history of the agency.

Wells Fargo & Co. /zigman2/quotes/203790192/composite WFC +0.74%  agreed on Friday to pay $1 billion in fines to the Consumer Financial Protection Bureau and the Office of the Comptroller of the Currency for harm inflicted on mortgage and auto loan borrowers. Technically, the CFPB fined Wells Fargo $1 billion and the OCC fined the bank $500 million, but the CFPB gave credit to Wells Fargo for the $500 million paid to the OCC.

Read: Here’s what Wells Fargo did to trigger a $1 billion fine

For the CFPB, the fine ranks only below the $2.125 billion against Ocwen Financial Corporation /zigman2/quotes/209487504/composite OCN +1.10%   and its loan servicing arm for mortgage servicing violations that allegedly put thousands of people across the country at risk of losing their homes.

This is not the first time the CFPB has fined Wells Fargo. In 2016 the CFPB imposed a $100 million penalty for what it said was the multi-year, systemic, illegal practice of opening unauthorized deposit and credit card accounts. The activity was the result, according to the CFPB consent order, of a culture at Wells Fargo of establishing aggressive sales targets and compensation incentives that encouraged employees to pump up sales by secretly opening more than two million accounts. Wells Fargo was ordered to pay full restitution to all victims in addition to the fine.

Wells Fargo is not the only repeat offender.

The CFPB was created by the Dodd-Frank Act in 2010 and formally began operation on mid- 2011 but did not get up in running until mid-2013 when the Senate confirmed Richard Cordray as director.

Mulvaney, also the director of the Office of Management and Budget, was appointed by President Trump to be CFPB acting director after Cordray resigned in November.

This the first CFPB enforcement action under Mulvaney’s leadership. Mulvaney was criticized by Democrats in both the House and Senate for his stewardship at a hearing this month.

It’s also, notably, the only bank Trump has criticized by name.

“So what the president tweeted out, if that’s accurate I don’t have any reason to think that it isn’t, is exactly what the statute tells us to do. And that’s what we did here today,” Mulvaney said in an interview on Fox Business Network.

Bartlett Naylor, a financial policy advocate with the nonprofit organization Public Citizen, was less congratulatory. “Shareholders, who will be footing the bill for this fine, did not conceive, oversee and conceal this massive fraud. Wells Fargo executives did,” Naylor said in a statement. “Meanwhile, the Republican corporate tax cut more than offsets this penalty. The firm reportedly posted a $3.35 billion benefit from the new law.”

Cordray was even more dismissive of Mulvaney taking credit. In a statement provided by a spokeswoman for his Ohio gubernatorial campaign, Cordray said, “Mulvaney has brought no new enforcement actions since he has been at the CFPB. Investigations that take many months or even years, and that are just now being finalized, are due to the aggressive work my team did to bring predatory behavior to light,” said Cordray. “To suggest this is the work of Mulvaney, who has done nothing but throw sticks in the spokes of a talented, hard-working CFPB team of devoted public servants is preposterous.”

The $500 million penalty collected by the OCC will be credited against the CFPB penalty. The OCC fine ties, before the effect of inflation, with the banking regulator’s 2012 fine against HSBC /zigman2/quotes/208272822/composite HSBC -0.66%   for Bank Secrecy Act and anti-money laundering compliance violations.