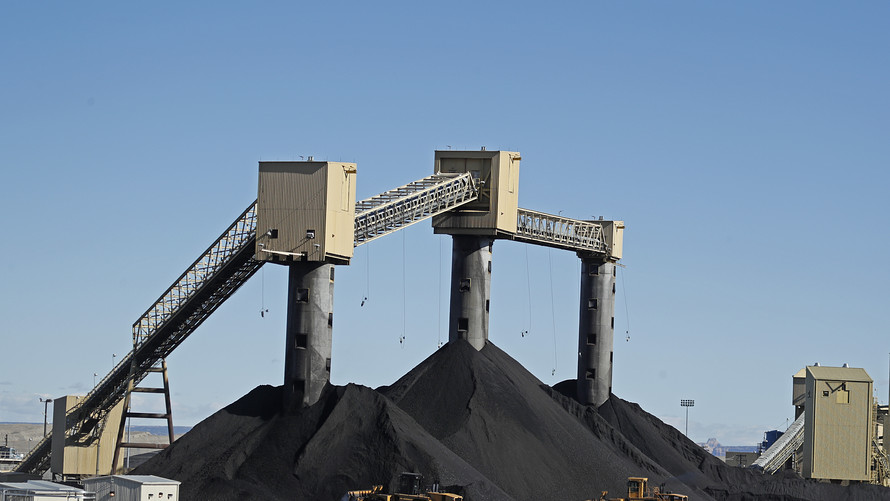 Getty Images
The coal industry, and its stocks, have been hit by a switch at many utilities to lower-cost natural gas and to renewable energy sources.

The pension fund, with $211 billion in total under management, could set the tone for other retirement plans that are facing increased pressure for accountability around man-made climate change. Environmental and investor advocacy groups have said the state office is moving too slowly. Pension-fund goals to be broadly invested across industries and their use of passive vehicles have complicated any withdrawal in New York and elsewhere.

The coal companies were selected for review, according to a Wednesday release , because they earn at least 10% of revenues from mining thermal coal, which is burned in power plants to produce electricity either directly for industries or to supply power grids. Under review are Arch Coal Inc. /zigman2/quotes/203542275/composite ARCH -2.16%  , Consol Energy Inc. /zigman2/quotes/208773703/composite CEIX -0.21%   and Peabody Energy Corp. /zigman2/quotes/203600175/composite BTU -2.32%  , among others, including coal miners operating in China.

“Investors who fail to face the risks and seize the opportunities presented by climate change put their portfolios in jeopardy,” said New York State Comptroller Thomas DiNapoli, in announcing the measured action. “If a particular company is not ready to move away from its reliance on thermal coal mining for profits, we may divest our holdings in that company.”

The declining sector’s pull on pension performance has come under criticism as well. The coal industry has been hit by a switch from many utilities to lower-cost natural gas and to renewable energy sources. The Dow Jones U.S. Coal Index /zigman2/quotes/210598955/realtime XX:DJUSCL +9.17%  has dropped nearly 80% over the past year. The VanEck Vectors Coal ETF  has shed 36%.

“[DiNapoli] could have fulfilled his fiduciary duty by divesting from coal years ago, instead costing New Yorkers millions of dollars in lost returns as many of these companies have declared bankruptcy, withheld workers’ earned wages, and seen markets evaporate,” said New York-based Dominique Thomas, mid-Atlantic regional organizer for environmental advocacy firm 350.org.

Researchers at InfluenceMap, with support from the #DivestNY coalition, claim that New York pension fund investments are responsible for a carbon footprint of 17.2 million tons , the equivalent annual carbon pollution from 6.6 million cars, which is greater than the emissions from the state of Connecticut.

“We’re hustling to pass the state divestment bill and do what the comptroller is failing to: protect our pensions, planet, and communities,” said Thomas, referencing a state-level bill pushing for coal divestment. The bill to date has 30 state senators and 40 New York Assembly members as sponsors.

Analysts with Moody’s Investors Service and Morgan Stanley & Co. LLC recently projected that coal’s share of electricity generation could go as low as 11% or 8%, respectively, by 2030. That share stood at 45% as recently as 2010, according to the U.S. Energy Information Administration. The related drop in coal emissions has driven total U.S. carbon emissions lower in four of the past five years, though steady polluting from transportation and industry is still scrutinized.

DiNapoli told Reuters he intends to begin reviews of other energy holdings , including for investments related to oil sands projects, as soon as this year.