Next coronavirus aid package expected to become reality ‘in June at the earliest,’ as House passes its bill 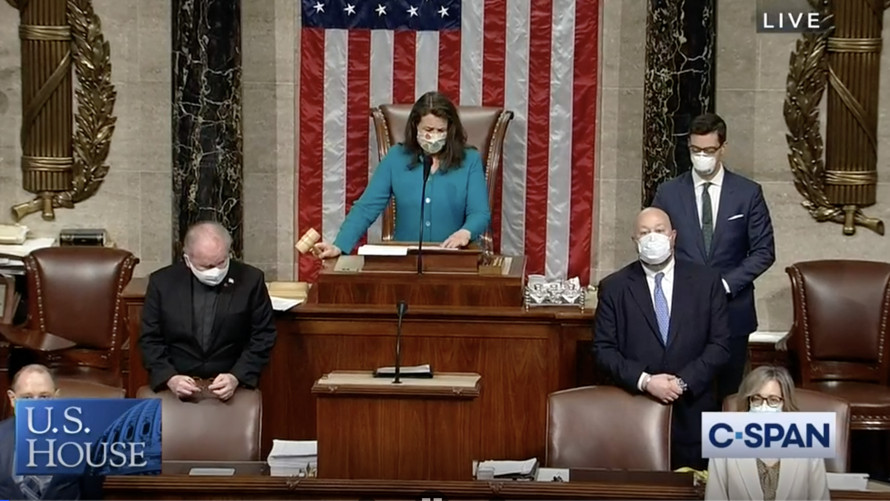 C-SPAN
House members and staff wear masks during their session on Friday.

As the Democratic-run House of Representatives approved its $3 trillion coronavirus relief bill on Friday night, analysts are saying it’s likely that President Donald Trump will end up signing a new aid package into law next month or later following extensive negotiations.

The sweeping House measure championed by Speaker Nancy Pelosi represents an opening offer in talks with the Republican-controlled Senate and the Trump administration. It passed in a 208-199 vote, according to preliminary tallies.

“We expect that negotiations over a finalized version of the Phase 4 bill will take at least until the end of May,” said Height Capital Markets analysts in a note. “We expect a final package to come together successfully but note that passage will likely be delayed into June.”

Henrietta Treyz, director of economic policy at Veda Partners, said in a note that the next package is likely to have a final price tag of between $1 trillion and $1.5 trillion, and “it will now come in June at the earliest.”

The House’s 1,815-page bill , dubbed the HEROES Act, calls for almost $1 trillion in additional aid for state and local governments, a second round of direct payments to American households and $200 billion for “hazard pay” for essential workers. The measure also incorporates a cannabis-banking bill, and it would roll back a cap on state and local tax (SALT) deductions and make changes to the federal government’s new Paycheck Protection Program for small businesses, such as eliminating a rule that requires that 75% of a PPP loan’s proceeds go toward payroll expenses.

“We have a monumental need,” Pelosi said at a news conference on Thursday afternoon ahead of Friday’s vote on the HEROES Act. The California Democrat noted that Federal Reserve chief Jerome Powell earlier this week discussed “the need for Congress to act immediately and pass further economic relief.”

Read more: More fiscal spending may be worth it, Fed’s Powell says

Senate Majority Leader Mitch McConnell has repeatedly stressed moving slowly on the next package and often criticized the House Democrats’ approach. The Kentucky Republican said on the Senate floor on Thursday that the HEROES Act “reads like the speaker of the House pasted together random ideas from her most liberal members and slapped the word ‘coronavirus’ on top of it.”

Related: Clash over next round of coronavirus aid heats up

But the White House probably would support another round of direct payments, according to a CNBC report on Thursday citing two Trump administration officials.

The next package would follow last month’s $484 billion measure that has been described as a “Phase 3.5” response to the coronavirus crisis. It also comes after the $2.2 trillion CARES Act that passed in late March, a mid-March package costing an estimated $192 billion, and an $8 billion measure that was finalized in early March.

“The finalized Phase 4 bill might be the last coronavirus legislation to move this year,” the Height analysts said. “With Republicans already criticizing the cost of this bill, and the White House focused on a reopening narrative that seems at odds with significant additional legislation, the opportunities to move a Phase 5 bill later in the summer or early fall seem to be dwindling.”

The analysts also said that while the HEROES Act “offers valuable insights into Democratic priorities moving forward, investors would be wise to refrain from putting significant weight to the exact details laid out in the Democratic bill.”

Also see: How Congress is spending trillions in response to the coronavirus crisis — in one chart

The House on Friday also voted along party lines to allow members to vote without being physically present on the floor, with Democrats saying the change is needed during the coronavirus pandemic.

U.S. stocks /zigman2/quotes/210598065/realtime DJIA -0.70%   /zigman2/quotes/210599714/realtime SPX -0.28% are trading well below their February peaks because of coronavirus-related worries, but they have rallied from their March lows thanks in part to optimism around Washington’s aid efforts. The S&P 500 and Dow closed with modest gains Friday, paring their losses for the week.