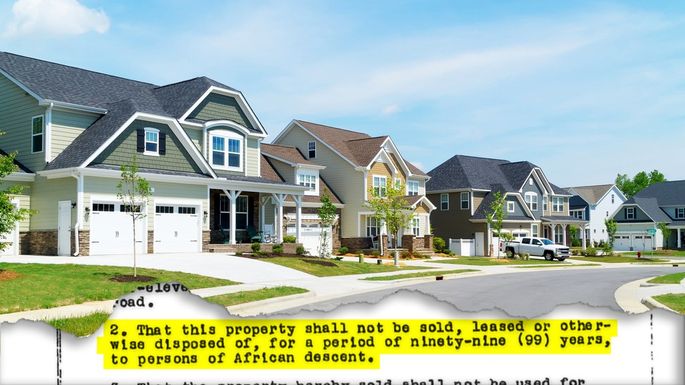 Daniel Shiplacoff and his partner didn’t know that their Spanish-style home at the foot of Hollywood Hills had a dark secret until after they had purchased the four-bedroom house in late 2000.

The mixed-race couple were shocked to receive a copy of the original deed to the Los Angeles property, which dated to the 1920s. The document clearly stated that no one of African or Asiatic descent could remain on the property after 6 p.m., unless that individual was a caregiver to someone living in the home. In other words: Blacks and Asians were barred from ever purchasing, renting, or otherwise living in the house.

“It just became very real in that moment, the ugliness of racism and classism,” says Shiplacoff, now 43, who is half-Jewish and half-Filipino. His now-husband is white. “Being the son of a woman from the Philippines and considering myself brown, it was a little painful. At the same time, it felt gratifying that a brown, gay man was buying this home and giving it a new chapter in its history.”

In recent weeks, following several widely publicized killings of black Americans by police officers, frustration with and rage over centuries of racial injustice have erupted into passionate protests across the country that in turn have set off a round of apologies and a national reckoning.

“Systemic racism” has become a catchphrase—and historically, one of its most powerful and harmful tools has been housing segregation. The discrimination helped to widen the gulf between blacks and whites in wealth, quality of life, and economic opportunity that persists today.

Although they are now illegal to enforce, racial covenants like the one Shiplacoff discovered can be found even now on deeds in just about every corner of the country.

First appearing in the early part of the 20th century, these so-called deed restrictions legally prevented people of certain races from buying, renting, or living in individual homes in white communities well before the practice of redlining officially marked those areas as off-limits to minority buyers.

Racial covenants were finally outlawed by the Fair Housing Act of 1968. But as the document that legally transfers title of a home from one owner to the next, a deed is typically not easily changed without getting lawyers involved. So in many cases the language remains as an unpleasant—and, to a new owner, often wholly unexpected—reminder of the legacy of segregation.

The covenants were “the most powerful tools to segregate American cities and determine who could own properties,” says Kirsten Delegard, director of the Mapping Prejudice project based at the University of Minnesota in Minneapolis. The project looks at historic housing inequality in the Minneapolis area, where George Floyd was killed. “Even though racial covenants have been officially illegal since 1968 ... the segregation they’ve established continues today.”

White families who bought homes during that time saw huge price appreciation, allowing them to build wealth and pass it down to future generations. Black Americans, however, were restricted to purchasing homes in less desirable neighborhoods, with fewer resources. Those homes were often sold at inflated prices to buyers given shadier, more expensive mortgages. Meanwhile, price appreciation in nongentrified minority communities has been significantly lower than in white communities.

These disparities may help to explain why nearly three-quarters of white Americans, 73.7%, owned their homes—compared with just 44% of blacks in the first quarter of 2020, according to U.S. Census Bureau data. Meanwhile, the median net worth of a white family is almost 10 times that of a black family—$171,000 compared with $17,600, according to the Board of Governors of the Federal Reserve System. The Fed’s Survey of Consumer Finances looked at 2016 data.

“It’s had a disastrous impact on African-Americans,” says Evan McKenzie, a political-science professor at the University of Illinois at Chicago. “The symbolic statements that these covenants make is a national disgrace. 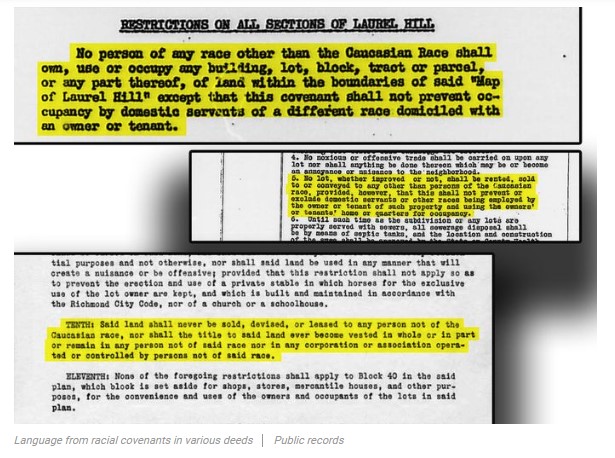 Racial covenants began appearing in deeds around 1910. Their usage picked up during the great migration, which began shortly after and extended for decades, as black Americans left the Southeast for better opportunities and a better quality of life in the rest of the country. Cities and suburbs in the Northeast, Midwest, and West responded with racial covenants. When the U.S. Supreme Court struck down discriminatory zoning laws in 1917, many communities turned to these covenants to ensure that segregation would continue.

“Black people were viewed as a threat to white people’s property values,” says McKenzie. “There was a widespread [belief] in the real-estate industry that white people do not want to live around African-Americans.”

The restrictions exploded in popularity in the 1930s and the 1940s, especially after World War II. New suburban communities were cropping up on the outskirts of cities and beyond. White families were abandoning urban areas for this new version of the American dream: a single-family house with backyard in the suburbs. But many developers couldn’t get loans to build new homes and communities during this time without including the exclusionary clauses.

The covenants, coupled with the federal policy of redlining implemented in the mid-1930s, worked. Racial segregation flourished—and even though the racist restrictions have been illegal for the past half-century, their impact remains. America’s suburbs remain predominantly white today—according to the Pew Research Center, 90% of suburban counties have a majority-white population.

“The racial covenants created the racial disparities you have today,” says Delegard. “Racial covenants, in some ways, reveal the origins of the structural racism that is so pronounced in Minneapolis.