Right at the time when markets were making new highs recently I mused whether this rally was based on hot air. I wanted to follow up on this assessment in light of the recent small pullback and provide an update on some of the technical signals.

One of the big technical red flags over the past few years has been weak internal participation. Particularly during the May 2015 highs we noted weakening internal structures that ultimately culminated in the August 2015 down move. The correction in January and February was no exception.

It is true that ever-expanding global central-bank intervention has continued to bring price back from the brink after each small correction and even now the latest rally has been brought about by promises of tax cuts, stimulus, etc.

But here again we can note an incredible bifurcation that raises red flags. Most notably most of the gains have really come from financial stocks. Indeed 50% of the Dow’s (DOW:DJIA) recent gain has come from 2 stocks only Goldman Sachs (NYS:GS)  and JPMorgan (NYS:JPM) . Talk about a thin rally.

Yet the Nasdaq (NASDAQ:COMP)   has pulled back over 2.3% since Nov. 24 despite making new all-time highs in between. While that does not sound like a big pullback it is nevertheless potentially significant. For one, last week the index has dropped back to July 2015 highs. That's an effective return of 0% over the course of almost 17 months:

Note also the potential structure of an expanding megaphone that the recent highs have brought about.

The reason this is of particular interest: This summer's new highs were driven by technology, specifically the high-cap tech players that control most of the market cap of the index. While some call this sector rotation, I see it as money desperate for yield chasing whatever is popular at any given moment, a tale of headlines full of sound and fury, signifying nothing.

What what did the summer high tech fliers just do? They printed a lower high in context of a potential larger topping formation:

None of this is confirmed until a neckline break but you can see how technically the PowerShares QQQ Trust Series 1 (NAS:QQQ)   has been trading along two trend lines:

Very precise. And the amount of open gaps to the downside raises red flags about how long price can avoid filling these gaps. Hence, watching the supporting trend line that was tagged last week should be on the watch list of any trader.

So what's the underlying message? The underlying picture is not as bullish as the headlines make them out to be as now over 50% of the Nasdaq 100’s (AMERICAN:NDX)   components are below their 50-day moving averages again continuing the trend of lower highs in 2016: 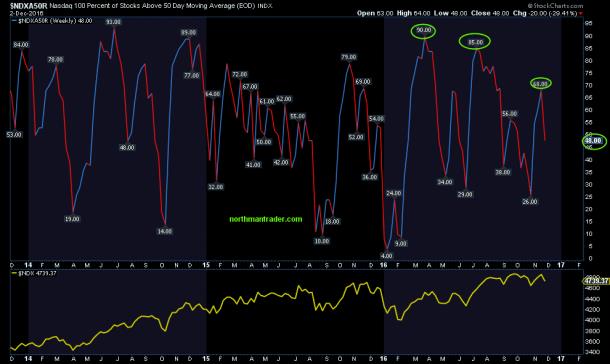 Finally, as to the (845:VIX) , as I suggested on Nov. 24 , it remains way too low and continues to call for a filling of upper gaps to come. One gap has now been filled. Two to go with the lower, rising, trend line as support:

While I see potential technical upside risk into 2235-2275 on the S&P 500 (S&P:SPX) the underlying picture continues to suggest what it has in the past several years: Selling strength especially in context of new highs and low VIX readings.

Bottom line: Downside risk is much larger than the upside risk in my assessment.

For further information I've published a more detailed analysis on individual tech components and the market at large here: Fake Out