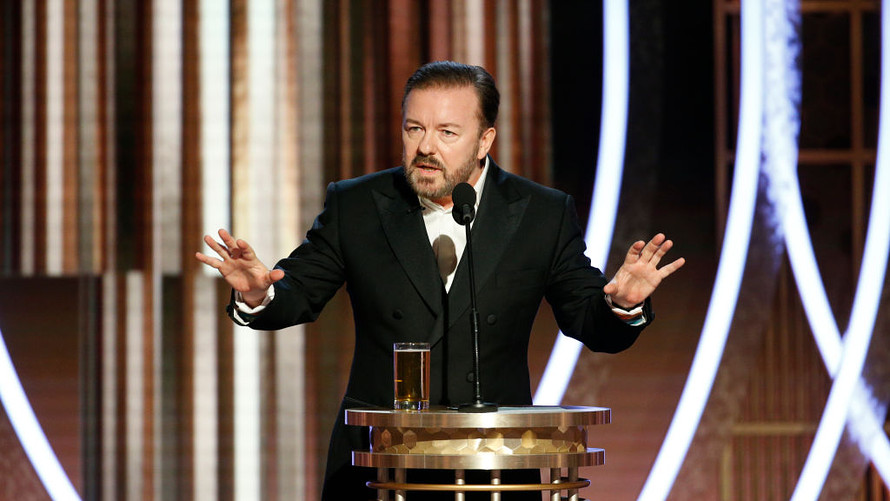 “Apple roared into the TV game with ‘The Morning Show,’ a superb drama about the importance of dignity and doing the right thing made by a company that runs sweatshops in China. So you say you’re ‘woke’, but the companies you work for, Apple, Amazon, Disney ... If ISIS had a streaming service you would be calling your agents.”

It’s Ricky Gervais, what did you expect?

Ah, but Gervais was just getting warmed up.

He also poked fun at Leo DiCaprio for dating young women, Felicity Huffman for her role in the college admissions scandal and Martin Scorcese for his critique of Marvel /zigman2/quotes/203410047/composite DIS +0.43% movies. No punches were pulled.

“You’re in no position to lecture the public about anything,” he told the star-studded audience. “You know nothing about the real world. Most of you spent less time in school than Greta Thunberg. So if you win, come up accept your little award, thank your agent, and your god and f*** off.”

His edgy opening should come as no surprise, considering his history, as well as his comments to the Hollywood Reporter ahead of the show.

“That first time I did it, [I thought], ‘Do I pander to the 200 privileged egos in the room, or do I try and entertain a global audience of 200 million people sitting at home who aren’t winning awards?’” Gervais said. “Well, no contest. I try and make it a spectator sport.... I’ve got to be the bloke sitting at home who shouldn’t have been invited. That’s who I’ve got to be.”

Well, safe to say, nobody will accuse him of pandering.