Shaking out the weak hands

L.A. Little, a professional money manager trading his own accounts while managing investment funds for qualified investors, is the author of three books (Trade Like the Little Guy, Trend Qualification and Trading, and Trend Trading Set-Ups) and has written extensively for many popular publications, such as Stocks and Commodities, Active Trader, TheStreet.com, RealMoneyPro.com and Minyanville.com. He writes daily on his website Technical Analysis Today, which offers tools and services that implement the concepts he espouses, and can be reached at tat@tatoday.com.

Acceleration moves many times lead to false moves, and false moves are a great way to separate the weaker hands from the strong. That separation happens on both the long and short side of the trading equation. On Monday, the process of shaking the trees began. The first shake out was the poor old short-sellers who hopelessly began to cover their shorts on the apparent breakout on the S&P 500. The question now is "Will the longs be shaken next?"

It has been said many times and in many ways that the market is quite efficient in frustrating investors. Frustration is maximized and most apparent on false moves. Monday amounted to a false breakout because by the end of the day, the prior swing-point highs (and there were two of them) were not overcome. 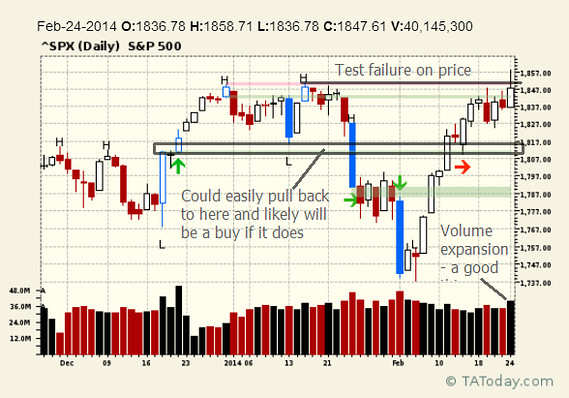 The bad news was that the test to get to higher highs failed — but it failed on price only. That leads us to what is typically good news, and that is when volume expands into the highs, then we can assume that somewhere down the road we will see further testing of this price area.

What isn't as apparent if you just look at the daily chart is how price failed. You have to look inside the day to see that, and it suggests that new institutional money was unwilling or unable to support the breakout. This one day, one-minute chart shows the day’s behavior and that short-covering was what drove prices to new high; not new buyers. 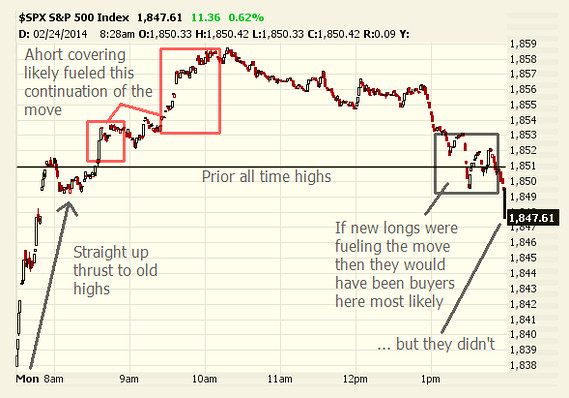 Although it is always difficult to draw definitive conclusions the shorter the time frame, the intraday buying and selling pressure left tale-tell signs that new money was not fully buying into the breakout Monday. If you look at the sequence of events, that appears to be the conclusion.

The backdrop on Monday to Wall Street’s big opening push was that Europe was already trading higher. There was plenty of chatter that the European Central Bank would be flooding the European markets soon with more liquidity. With programs buying out of the gate, a straight up move ensued that stalled briefly at the old highs. One can assume that was new money being put to work on that first leg up off the opening bell, but what followed was probably not. The next leg of the advance appears to have been primarily fueled by short-covering since once the advance halted and price began to consolidate, the buyers did not step back in where they should have, but instead were unwilling to put more money work.

If new money was being put to work Monday, then why wasn't it buying again late in the day at cheaper prices than were being paid for all but the first 30 minutes of trading? The answer is that new money wasn't buying the majority of the day most likely.

Given this conclusion, we should expect the false breakout to at least attempt to do some tree shaking of the long positions next. Clearly, on a very short-term basis, the pressure is now on the buyers to either put up or shut up. Again, sticking with a shorter-term timeframe than we normally do, a neoclassical perspective shows the key areas where one can ascertain if longs are to be shaken out next.

On a 30-minute time frame (the long-term timeframe to a daytrader), the chart shows the primary battleground early on will be the area between anchored resistance and a retest and regenerate attempt off the swing-point high on this timeframe. If the early trade cannot retest and regenerate higher, then the next two anchored support zones will likely become the targets for further pricing pressure. 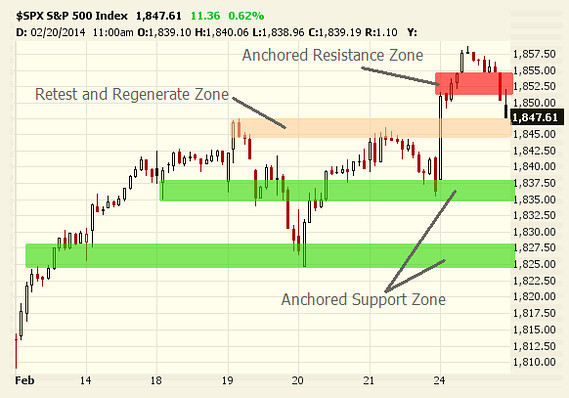 One would expect that if the $1835 area falls, then weak longs will begin to give their shares away so as to not get caught in a false breakout. On this time frame, that would lead to some scrambling, but looking back up at the daily chart and considering the notes up above, the longer-term expectation now is for the the range trade that had set up to be resolved to the upside eventually. After all, the Nasdaq Composite has already broken to the top side and has done a successful retest-and-regenerate sequence. 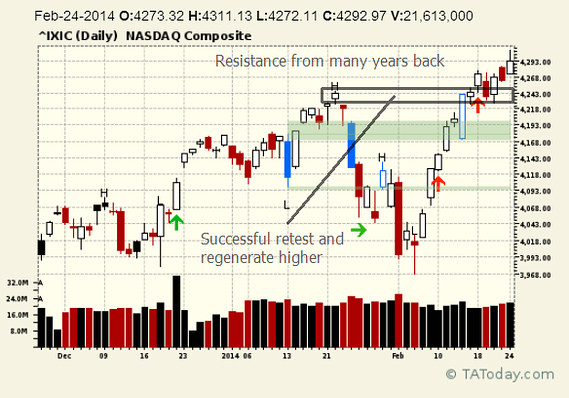 The bottom line is that a push lower that is likely now probably will end up being a good buying opportunity — not one to sell. Sometimes they take it down to take it up, and this setup has enough worry bumps on it to suggest just that type of behavior could unfold.