Some people have been eyeing bargain-basement prices and asking, ‘Should I go on a cruise?’ The State Department has some strong words for those who are considering it 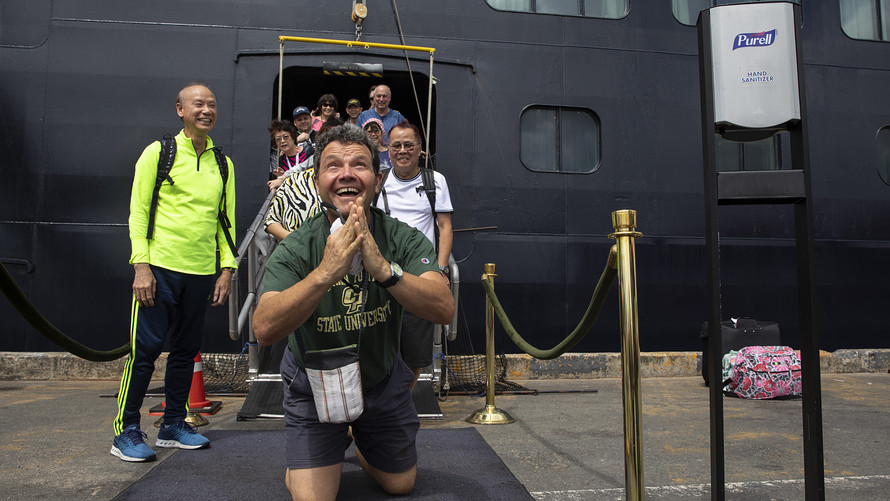 Getty Images
Passenger John Miller from Seattle, Wash. falls to his knees disembarking from the MS Westerdam cruise ship after being stranded for two weeks now docked in February off the coast of Sihanoukville, Cambodia. The large cruise ship with more than 2,000 crew and passengers was completely free from COVID-19, but was turned away from five other Asian locations.

Have you planned a cruise? If so, should you cancel due to the spread of the coronavirus epidemic around the world? Cruise-ship companies are rolling out deals as low as $300 for week-long voyages after a slew of bad press related to COVID-19, which may be tempting for some people. But is that enough to step on board given the current climate around coronavirus?

The U.S. State Department says don’t do it. It issued a stern warning over the weekend: “U.S. citizens, particularly travelers with underlying health conditions, should not travel by cruise ship.” The department said the Centers for Disease Control and Prevention has issued guidance, cautioning travelers of “increased risk of infection of COVID-19 in a cruise ship environment.”

“In order to curb the spread of COVID-19, many countries have implemented strict screening procedures that have denied port entry rights to ships and prevented passengers from disembarking,” the State Department said . The city of Santa Barbara has asked cruise ships not to dock there due to the coroanvirus epidemic.

The department said U.S. citizens cannot continue to rely on the U.S. government to intervene on ships that are quarantined at sea, or shunned by other countries. “While the U.S. government has evacuated some cruise ship passengers in recent weeks, repatriation flights should not be relied upon as an option for U.S. citizens under the potential risk of quarantine by local authorities.”

Worldwide, there were 119,358 COVID-19 cases and 4,290 deaths as of Wednesday morning, according to data published by the Johns Hopkins Whiting School of Engineering’s Center for Systems Science and Engineering. In the U.S., 31 people have died, and there are approximately 1,039 confirmed cases. It has spread to nearly 100 countries in just over three months.

“This is a fluid situation,” the State Department added. “CDC notes that older adults and travelers with underlying health issues should avoid situations that put them at increased risk for more severe disease. This entails avoiding crowded places, avoiding non-essential travel such as long plane trips, and especially avoiding embarking on cruise ships.” 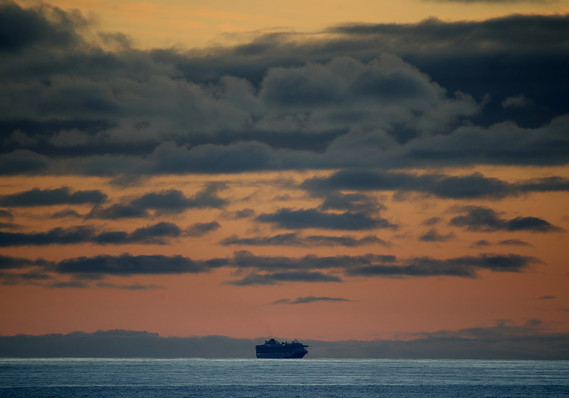 Getty Images
The Princess Cruises Grand Princess cruise ship sits off the coast of San Francisco as it takes on supplies. It was finally given permission to dock in Oakland, Calif. on Monday.

The biggest threats to those contemplating a cruise are the prospect of being quarantined on a vessel should a port refuse to allow the ship to dock and, of course, someone aboard testing positive and the virus spreading among crew members and passengers. The U.S. Centers for Disease Control and Prevention previously advised people not to take a cruise to or within Asia.

A Princess Cruises ship, the Grand Princess, en route from Hawaii to Mexico, was stranded off the coast of California for five days after an elderly man who had sailed on the ship’s previous voyage died of the new coronavirus last month. Some 21 people tested positive for the coronavirus-borne disease COVID-19 on the ship. The ship was finally allowed to dock in Oakland on Monday.

Speaking about the Grand Princess on Friday, President Trump said he would have preferred if the passengers stayed put, “I’d rather have the people stay. But I’d go with them. I told them to make the final decision. I would rather — because I like the numbers being where they are. I don’t need to have the numbers double because of one ship that wasn’t our fault.”

Last month, another Princess Cruises ship, the Diamond Princess, was quarantined off Japan for two weeks. Dozens of people tested positive for the virus, and seven passengers from that cruise ship have died, Japanese public broadcaster NHK said Saturday. Princess Cruises did not respond to request for comment.

Carnival spokesman Roger Frizzell told MarketWatch that the company has strengthened its health screening and boarding protocol that denies boarding to guests who have visited China, Hong Kong, Macao or South Korea, and select areas within Italy within the previous 14 days. “In addition, we have installed thermal scanners in our brands in Asia,” Frizzell said. 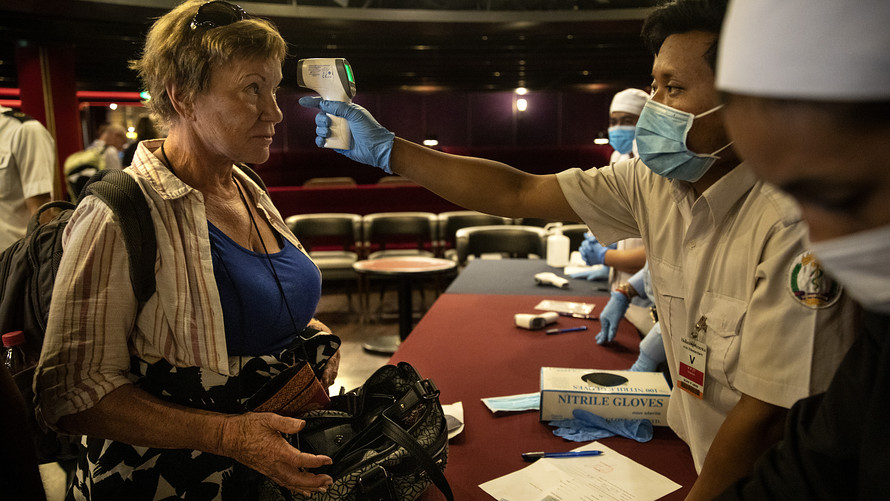 Getty Images
Passengers on the MS Westerdam cruise ship having their temperatures taken.

Travel on cruise ships is particularly popular among families and the elderly, and the risk of contagion is relatively high on a ship, health professionals have said. Younger children with strong immune systems have the lowest fatality rate from COVID-19, but those with stronger immune systems may be prone to spreading the virus to those most at risk of dying from the disease.

Novel coronavirus has a median incubation period of around 5.1 days. The rate is longer than that other human coronaviruses (3 days) that cause the common cold. The period of incubation can affect how fast illnesses spread. If people get sick from the illness sooner, they are obviously less likely to be walking on the deck, swimming in the pool and, thus, less likely to spread the virus.

After several other high-profile cases of cruises being quarantined and stranded offshore, people have obviously expressed concern about traveling by cruise ship. Cruise lines have updated their cancellation policies to allow passengers, especially elderly passengers who may be worried about congregating in enclosed spaces, to cancel and re-book trips at future dates.

• Disney Cruise /zigman2/quotes/203410047/composite DIS +0.58%  passengers may cancel trips scheduled to sail before May 31 as little as a day in advance and must redeem their credits within 12 months of their original cruise date.

Also see: Should I cancel my flight? Will recirculated air on a plane spread coronavirus? Here’s what you need to know before traveling

Before the U.S. State Department’s statement Sunday evening, Disney, like most major cruise lines, had introduced precautionary measures for future sailings and warns passengers that they will not be allowed to disembark in certain countries, if they have recently visited or even had a stopover in a place where there was a severe outbreak of coronavirus.

“If your cruise includes a stop in Nassau or Castaway Cay, please note that the Bahamas will not allow anyone to disembark in any Bahamian port if they have been to China, South Korea, Italy or Iran in the past 20 days prior to arrival,” Disney Cruises previously said in a statement . Italy has said it will quarantine people in the northern part of the country, one-quarter of the population.

Disney also said that some passengers will effectively be denied boarding. “If your cruise includes a stop in Jamaica, please note that in addition to the locations noted above, officials there also will not allow guests who have traveled from, to or through Singapore within 14 days of arrival to disembark. These guests will be unable to sail.”