If you just pay attention to the Dow Jones Industrial Average, things look peachy. The index remains mired in a six-month long sideways channel but continues to trade near new all-time highs. However, small-cap stocks are giving off signs that should give investors pause.

The bulls have all the justifications figured out. The weather is the blame for the recent economic slowdown, in which first-quarter GDP growth is on track to be revised to a -0.6% annualized growth rate according to Macroeconomic Advisors. Russian President Vladimir Putin is making diplomatic-sounding noises again on Ukraine. The first-quarter earnings season has been salvaged after a rough start. And Federal Reserve chairman Janet Yellen is coming up with new and exciting excuses to keep short-term interest rates near 0% — where they've been going on six years now. 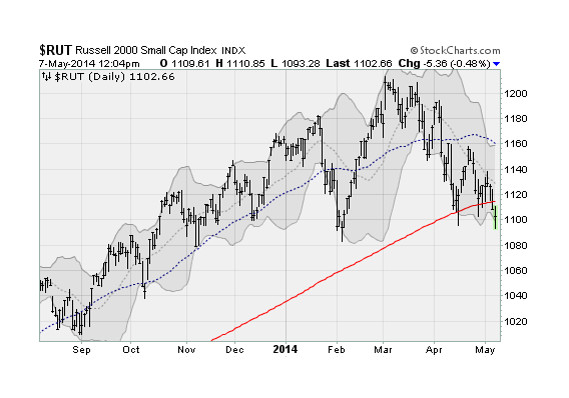 But a quick glance over at the small caps in the Russell 2000 — which Janet Yellen in her testimony to the House of Representatives on Wednesday admitted were possibly trading at overvalued levels — suggests trouble. On Tuesday, the index closed below its 200-day moving average for the first time since 2012, ending an 18-month-long uptrend. This was a breakdown long in the making: There were no less than seven attempts over the last two weeks.

The bulls simply couldn't resist the selling pressure any longer.

The dichotomy is stark, and if history is any guide, it's downright scary. In fact, the gap that has opened up between small and large stocks was last seen near the very top of the last two bear markets.

According to Jason Goepfert of SentimenTrader, Tuesday was only the third time in 35 years of market history that the NYSE Composite was sitting at a 52-week high one day before the Russell 2000 dropped below both its 50- and 200-day moving averages the next day. The last two occurrences were 3/12/99 and 11/1/07.

Moreover, small stocks aren't the only area warning of trouble. Despite declarations that the economy is resurging after a harsh winter, U.S. Treasury bonds have been well bid — traditionally, a sign that the bond market is pricing in trouble. As a result, 10-year yields have dropped back to the 2.6% level, down from a high of 3.05% at the end of 2013.

The inevitable question becomes this: Is the overall market bubbly enough to justify a major turning point? 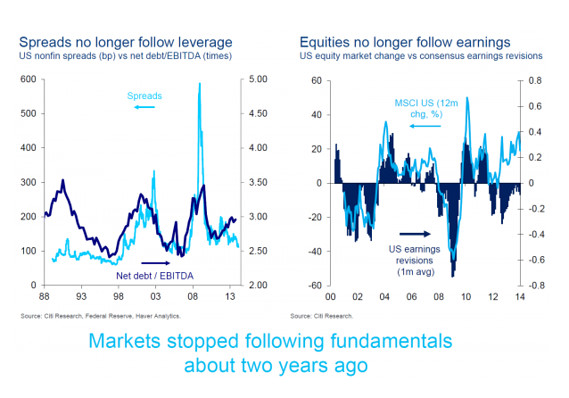 I think it is. According to Citigroup research, the market stopped following the fundamentals in late 2012. That's when bond-market spreads disconnected from the amount of borrowing companies were doing, and it's when stocks stopped responding to earnings revisions.

I've been recommending investors play it cautiously with a focus on Treasury bonds via ETFs such as the leveraged Direxion 3x Treasury Bond Bull /zigman2/quotes/209018185/composite TMF +3.73% , which is up nearly 12% since I added it to my Edge Letter Sample Portfolio in late February.

For the more aggressive, the weakness being displayed by small-cap stocks is creating put-option opportunities in stocks like Lululemon /zigman2/quotes/204011506/composite LULU -2.95% and Coach . Put-option positions recommended to clients in these names are up 240% and 407% respectively.

Disclosure: Anthony has recommended TMF and puts in LULU and COH to his clients.