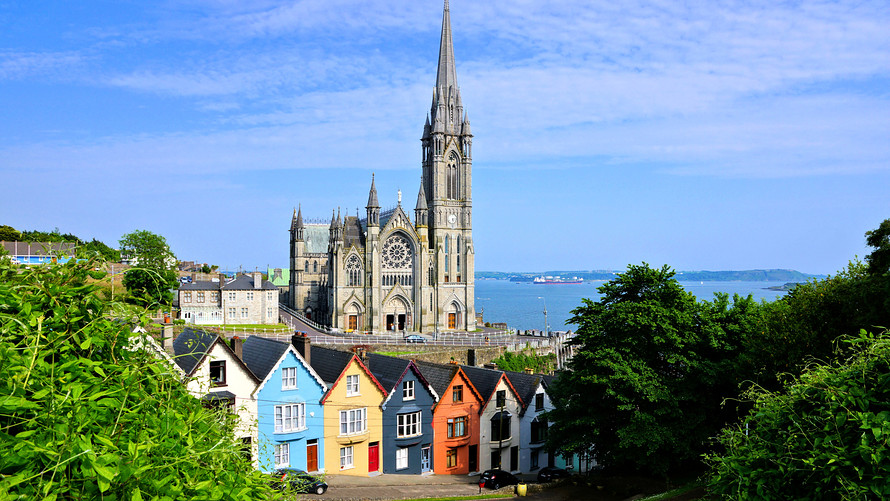 Getty Images/iStockphoto
A cathedral in background in the port town of Cobh, County Cork, Ireland. ‘The Irish wake is the quintessential, final act of intimacy,’ writes Dearbhail McDonald, an Irish writer and broadcaster.

DUBLIN, Ireland — The traditional wake is one of this island’s most sacred rituals.

The Irish wake is the quintessential, final act of intimacy, and social distancing is an affront to how Ireland celebrates life and death.

The gathering of hordes at the home of the deceased for up to three days is the hallmark, in many ways, of our respect for the dead, and of our famed hospitality.

We knew that sweeping restrictions were inevitable once the coronavirus made its dark presence felt in Europe.

It involves innumerable hugs, tears, laughter and the firm holding of hands as we try, at close quarters — and enveloped by rivers of tea — to hold our grief.

It involves overnight vigils at the coffin of the deceased, whose hands are touched endlessly. And it can involve road-traffic management by volunteers or the gardaí — the national police — if your loved one’s passing attracts a significant gathering.

It’s hard to describe how much this ritual of the Irish wake matters.

It is a tradition that can be traced back to the era of the Great Famine.

It is hard-wired into our DNA.

We knew that sweeping restrictions were inevitable once the coronavirus made its dark presence felt in Europe, including Ireland. Nonetheless, it was a shock to see, in recent days, a sorrowful sign on a rural Irish farmyard gate. The sign, on the gate of a wake house, directed mourners, other than immediate family, to stay away because of new restrictions on mass gatherings including weddings, baptisms and funerals.

Another sign said, “Please refrain from handshaking,” a hitherto unthinkable thing in the Irish mourner‘s psyche.

When the Irish Association of Funeral Directors published guidelines stating that all funeral services for coronavirus victims should be postponed, and the deceased brought straight to the crematorium or cemetery for committal, Ireland emitted a collective sigh of distress.

Families will be able to say goodbye to their loved ones in the coffin but will not be allowed to kiss the deceased.

The association also recommended banning family members from funeral homes, prompting the Health Services Executive, or HSE, to rapidly produce more permissive guidelines stating that close family members of people who die from the coronavirus will be allowed attend their funerals, but only under strictly controlled conditions.

For now, families will be able to say goodbye to their loved ones in the coffin but will not be allowed to kiss the deceased.

After a video of revelers in a tourist hot spot in the Temple Bar section of central Dublin was widely circulated, Irish Prime Minister Leo Varadkar threatened to seek enforcement powers to sanction bars and clubs in breach of the rules of gatherings of more than 100 people.

All pubs in Ireland were closed on the eve of St. Patrick’s Day, following a request by the government. The mass closures were accompanied by a plea from the country’s chief medical officer, Tony Holohan, for the public not to host or attend “COVID parties” in their home.

Some, but not all, have complied.

In Ireland, there have been 683 confirmed cases and three deaths, as of Saturday. In the U.K. province of Northern Ireland, however, where schools are due to close on Monday, one death from COVID-19 have been recorded and there are 108 confirmed cases.

Varadkar made a solemn televised speech to the nation on St. Patrick’s Day evening. “This is the calm before the storm,’ he said, predicting that the number of cases will soar to 15,000 in weeks.

As of Saturday evening, there were 304,544 confirmed cases and 12,974 deaths worldwide, according to data from the database of Johns Hopkins University’s Center for Systems Science and Engineering; the database also reported 91,540 recoveries. The U.S. has had at least 25,493 confirmed coronavirus cases and 307 deaths, John Hopkins added. 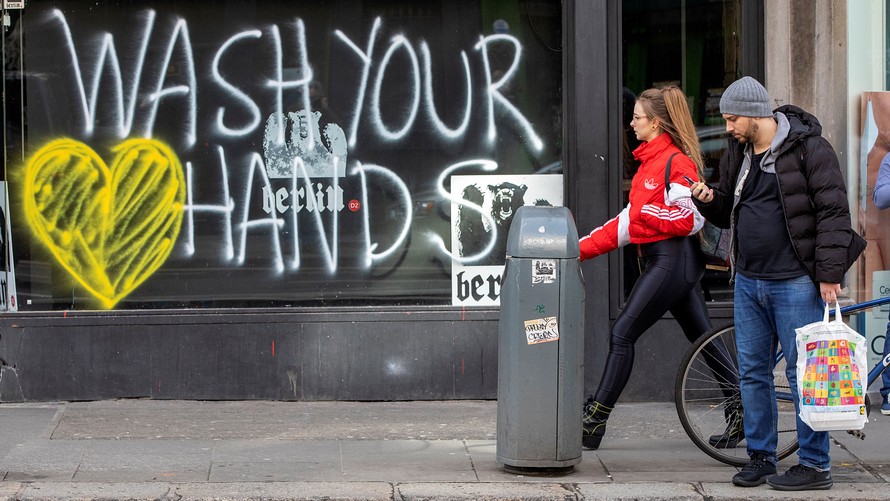 AFP via Getty Images
Ireland is still grappling with resistance to social-distancing guidelines, echoing a pattern scene in other countries in the early days of the COVID-19 pandemic.

Like our fellow citizens around the globe, we are not immune to the alarm generated by COVID-19, the disease caused by the new virus SARS-CoV-2.

Less than an hour after Varadkar announced well-flagged restrictions including the closure of schools, universities and cultural institutions — as well as the cancellation of mass gatherings — the panic buying at my local supermarket in Dublin resembled a B-movie version of an end-of-days scene.

It was surreal. The fear, if misplaced, is sadly all too real.

No amount of reassurance by the government and business leaders that supply chains are not at risk could assuage worried shoppers hoofing acres of toilet roll, pasta and bread into their trollies like extreme preppers from some obscure U.S. cable channel.

And the wider contagion that followed was brutal and swift, with restaurateurs and child-care operators laying off staff because of a collapse in bookings.

It is famous for its theme tune and the goodies and giveaways for those sufficiently lucky to get tickets to the studio — “one for everyone in the audience” is one of the show’s famous catch phrases.

But last Friday night Tubridy played to an empty studio. The week before, he hosted in front of a ghost studio, flanked — meters apart as per official guidelines — by a group of experts deployed to calm Ireland Inc.

“These past few days have been without precedent in the history of the state,” Tubridy said at the opening of the show on March 20 . “There are years that pass by where nothing happens, then there are weeks like this, when the whole lifetime happens before our eyes,” he said.

“And know that we surrender to self-isolation together and we will share the emotional burden together,” he said. “And when this is over, we will celebrate together, and together we will lift each other back up. But for now, there’s only one right thing to do: obey the simple rules. There is no mystery here. Social distancing, basic hygiene and effective hand washing, that’s what it takes.”

‘Your self-discipline, through self-isolation, will rescue this country from the worst chaos of the coronavirus.’

“It’s normal to feel scared. It’s perfectly normal to feel lonely, but you’re not alone, big difference,” Tubridy added. “Tonight, our frontline workers, our magnificent nurses, medics and ambulance crews are proudly represented on this program, and I would urge you, strongly, to listen to what they have to say.”

The solemnity and calm maturity of the broadcast was a welcome antidote to the deluge of hysteria perpetrated by all manner of keyboard warriors berating politicians for making tough decisions based on the best available medical and epidemiological advice at hand.

A week earlier, it was a different story. For more than a week, a debate had raged over whether Ireland’s St. Patrick’s Day festivities should be canceled. It has been celebrated in some manner for more than 1,000 years, and was expected to generate €73 million for the economy in 2020.

Although Ireland’s is now one of the fastest-growing economies in Europe, the wounds of the 2008 global financial crisis, which brought the International Monetary Fund–led troika to these shores, run deep in the Republic, which is reeling from a housing and homelessness crisis that led to a breakthrough election for Sinn Féin, a nationalist left-wing party committed to reunifying the island, led by Mary Lou McDonald.

Canceling our national feast day is no mean feat. 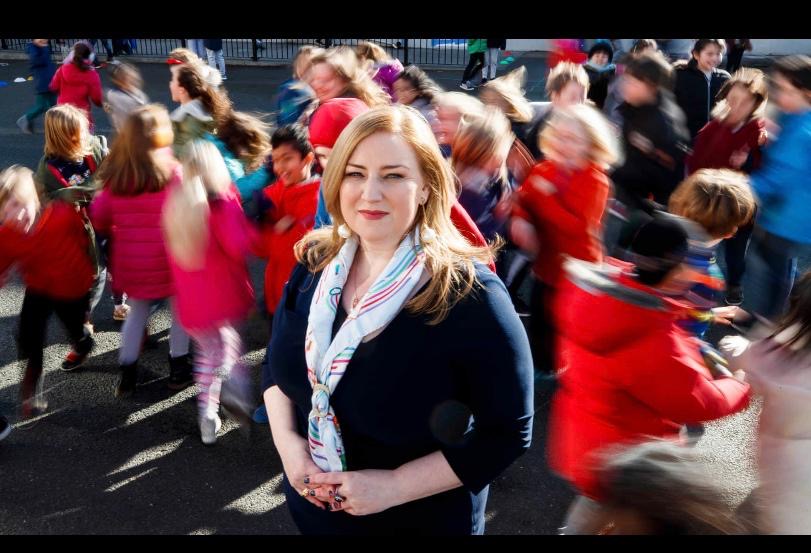 Dearbhail McDonald is a journalist, author and broadcaster based in Dublin.

The government eventually relented to public pressure to cancel the parades, banning large events until March 29 at the earliest, only for the body public to vent its outrage and dismay at a decision by British Prime Minister Boris Johnson’s government to allow the Cheltenham Festival to proceed.

Over 250,000 people, with thousands of Irish devotees, attend that famous horse racing festival in Gloucestershire over a four-day period.

“Cheltenham’s horsey set unmoved by some poxy little global pandemic,” screamed a headline from the Irish Times whose sublime sportswriter Keith Duggan captured how the outside world could only look on aghast as the festival continued amid coronavirus crisis.

The differing stances taken by the British and Irish governments toward the coronavirus has baffled this tiny island of around 6.7 million people north and south of the border, which, for more than three years, has been beleaguered by the prospect of a hard border returning in the wake of Brexit.

My godson, 7, was one of the many small children who couldn’t believe that they, at the time of writing, are still at school in my hometown of Newry, in Northern Ireland, when their cousins and friends in Dundalk,13 kilometers across the border in the Republic of Ireland, have been sent home.

It doesn’t take a 7-year-old to tell you that pandemics know no borders, nor do global-health emergencies respect age-old political and political rivalries.

Yet the differing stances taken by the British and Irish governments sparked a war of words between the Democratic Unionist Party, led by First Minister Arlene Foster, and Michelle O’Neill, her deputy who is also the vice president of the republican Sinn Féin party.

The lack of an all-island response has rattled communities on both sides of the Irish border puzzled by which experts’ advise — the U.K.’s or Europe’s — they should heed.

As we wait with bated breath, spirits are being raised by welcome, ingenious outbreaks of viral kindness and offers to help those on the frontline of this battle as well as those who are self-isolating.

It remains to be seen whether the island of Ireland becomes a Singapore or an Italy.

And, at times, it feels as if we are in a limbo state, a form, you might say, of purgatory.

No one knows the final destination. But it’s a journey we are taking together. More physically apart, yes, but still coming together with our joys and our griefs, in this ancient, timeless art of the gathering.

Dearbhail McDonald is a journalist, author and broadcaster who presents ‘Sunday With Dearbhail’ on BBC Radio Ulster. You can tweet Dearbhail @dearbhaildibs.

(This story was originally published on March 15, and was updated on March 21.)