THE IRONWOOD TREE, FROM WHICH Isabelle's $400 million Boston-based Ironwood Capital Management, takes its name, is a slow-growing, long-lived desert tree, with hard and dense wood, that eventually becomes the tallest tree on the landscape. When Isabelle picks stocks for his ICM Small Cap Value fund or the private accounts he manages, he is often looking for companies that exhibit the same potential as the ironwood tree. It is his special talent to be able to see through a company's plight and recognize the possibilities. That's how he has been able to deliver solid returns since launching the fund nearly seven years ago. Over that span, the fund is up 5.6% a year, on average, compared with 5.31% for the Russell 2000. The small-cap value style has struggled this year and the ICM Small Cap has taken its lumps, too. Not one to hide, Isabelle blames the underperformance on -- what else? -- bad stock picks.

So what's a portfolio manager to do? If you're Isabelle, regroup, rebalance and add some new names.

Barron's: What's your outlook for the economy?
Isabelle: My concern is the yield curve. It is flattening, which suggests a recession. But I'm not sure I see us headed toward recession. The dollar is again on the verge of being really weak. I don't see how the dollar can stay weak and how rates can stay low. What if short rates continue to creep up by virtue of the Fed and long rates let go because the dollar weakens and inflation comes back?
Every company I poll is seeing price increases in raw materials and is getting price increases in what they sell. Unless I'm totally missing something, inflation has got to come out somewhere, even though so far none of the indicators have shown we've got much of it. If inflation pops up and the dollar weakens, then long rates, it would seem, would have to go up.
My fear is that long rates jump rather sharply, and that won't be good for anybody. On the other hand, if long rates go up and the yield curve shifts in an orderly fashion, rates will still not be so high as to crimp capital spending.
And that's the other question mark: Will capital spending pick up? Either there will be no pickup in capital spending here because it's been soaked up by China and India, or we are just not there yet in terms of the cycle. In other words, the return on investment for some companies, given what they see in the future, still is not high enough for them to begin to reinvest.
We could still see a pickup in capital spending mid-market that could sustain the economy and strengthen it. People keep saying the economic recovery is long in the tooth at three and a half years. But it hasn't felt like an across-the-board solid recovery to me. We kicked along the bottom for a while, companies got real conservative and built up cash and reduced their debt, but it's not as if there's been a big cycle change yet.

People are still skeptical about price increases sticking.
Look at Aleris [ticker: ARS]. They did over $1 a share in earnings for the quarter. Their margins popped up and everything is working right, but they said they don't think results will be quite as strong next quarter. Now everybody is saying that's it, it's all over, and the stock price has retreated.
Olin /zigman2/quotes/200456258/composite OLN -2.54% [OLN] is another company that produced very nice earnings and is at $18 a share now. They reported a fabulous quarter and everybody said, well, that's as high as chlor-alkali margins can go, they are at peak levels and that's all there is in the company. Well, there is also a metal segment, a big brass segment they bought that hasn't really been doing much and I'm not so sure the chlor-alkali business is over and done with in Olin's case because they have contracts that roll off over a period of time. So maybe there's another year to this, maybe a little longer. I'm not so sure we've seen a peak in margins despite what people are saying. 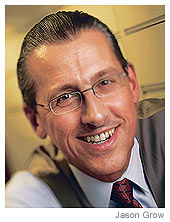 You've pared back your portfolio to 45 stocks. What kinds of sectors or companies did you exit?
We probably had too many companies in the biotechnology area, partly because we invest a little bit like venture capitalists and take relatively slim positions. In terms of weighting it didn't do much, but it amounted to a lot of names. We also reduced the number of service and consumer-related stocks.
We're trying to focus our attention on companies with operating leverage. We exited some companies that did perfectly well, but they didn't have quite the operating leverage I wanted. InfoUSA /zigman2/quotes/206190442/composite IUSA -2.09% [IUSA], Lightbridge [LTBG], TeleTech /zigman2/quotes/206974210/composite TTEC +0.28% [TTEC] and U.S. Physical Therapy /zigman2/quotes/201527198/composite USPH -0.36% [USPH] were some we got out of. We also got out of some stocks that we got wrong, such as Hanger Orthopedic [HGR] and Advanced Marketing
Anything I'm looking at is something that has an investment story to it, is really undervalued and preferably one we can hold for a while and make a significant return.

Small-cap value has come under pressure. What's your outlook for the sector?
The Russell 2000 Value index is 34% financial-based -- more than a third. I'm not even close to that. We're much more attuned to the Russell 2000. We just try to pick stocks that have economic value, that's all. The biggest negative for us has been the pressure that some people have felt to move away from small- caps because the mantra has been that large-caps have the more modest valuations.
There's been a rotation out of good performers and that has been a little bit vexing for us. But, by and large, we just keep searching for undervalued companies.

What has made the difference in the market this year? Why has it been so difficult to get positive results?
It has been a litany of factors. That kind of uncertainty does not make markets happy. Smaller caps have taken it on the chin because they are more volatile in general and they've had a good run. Financials have been much weaker this year because rates are going the other way. But overall there's been concern about budget deficits, consumer debt, oil prices and the weak dollar. Every other week we have some shudder of nervousness.

What have you been adding to your portfolio?
We used our cash to bulk up on the names we felt had lots of valuation room and selectively added some new positions.
We added one company that is unusual for us: Western Silver, a mining company. Tom Patton runs it and he has excellent credentials. The bulk of their property is in the Chile Colorado and Penasquito region of Mexico. In the Penasquito region alone, they have about 150 million ounces of silver potential, 300 million ounces of gold and then about a billion ounces of zinc and lead, though their values pale in comparison to the values for the silver and gold. But still, at that level you can make some serious money. And Chile Colorado deposits are even bigger in size.
Add all that up, and it comes to several billions of dollars in aggregate value. The stock has a market value of $400 million today. So you just have to say to yourself, how real are these deposits, and how difficult is it for them to get them out, and do you have confidence that they can do it? But the potential asset value is so far greater than the market price, even if we are off by some reasonable factor we are still going to have a lot of upside potential. That's the key here.

How close are they to developing this potential?
Originally we thought they would document all the finds, pick up a big partner and then develop it. Now they say they want to do it themselves. I believe that they are capable of doing it, but they will have to raise about $250 million in cash to build the mining facilities
By 2008 they could do it and earn between a $1.50 and $2 a share. The stock is at $7.50 a share. Based on their assets, we think it could be valued at $20 a share.