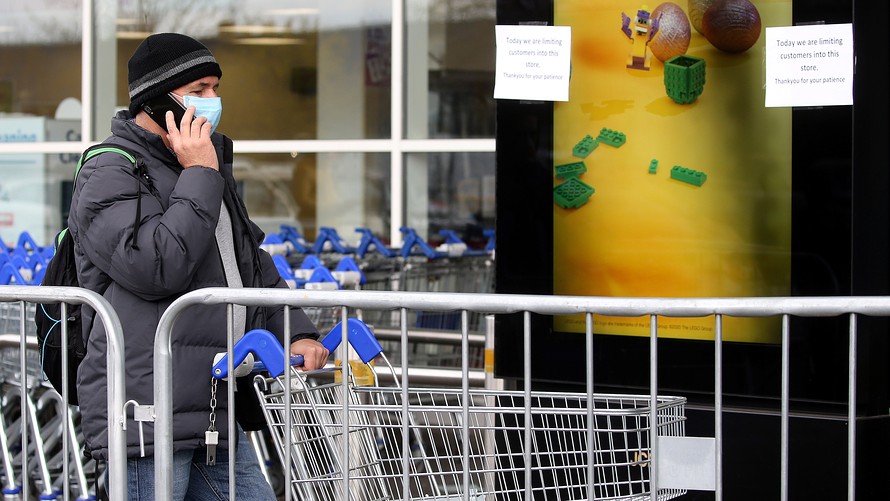 Getty Images
A shopper wears a mask Tuesday as he stands with a shopping trolley behind metal barriers while awaiting his turn to enter a Tesco supermarket in northwest London.

Christmas came early for U.K. grocers as supermarket sales in March trumped those usually posted over the festive period and broke all records, new data show.

Households facing lengthy lockdowns appear to have panic bought long-life items such as pasta, rice and tins of vegetable, as they splashed out a hefty £10.8 billion ($13.4 billion) over the past four weeks at Britain’s grocers, according to latest figures from market research firm Kantar.

The widely followed data give the first insight into the effect stockpiling has had on supermarket sales as investors look to food retailers , such as Tesco (LON:UK:TSCO) , Sainsbury (LON:UK:SBRY) and Morrison (LON:UK:MRW) , which are increasingly being seen as defensive stocks during the crisis. The U.K’s third biggest player, Asda, is owned by Walmart (NYS:WMT) , which has said it is reviewing its options for the chain. Developments in the U.K. grocery market could be seen as a playbook for the U.S., which is slightly behind Britain in terms of the coronavirus crisis.

Traffic has fallen at Walmart, Costco (NAS:COST)   and Target (NYS:TGT)   for the first time in weeks as Americans may have sufficiently stockpiled for now, according to Placer.ai.

That pattern of shopper traffic could shift again, though social distancing and e-commerce may keep consumers away from stores. The Dow (DOW:DJIA)  closed down 1.84% yesterday.

Read: Resurgent Tesco stock could have more good news ahead

Fraser McKevitt, head of retail and consumer insight at Kantar, said: “Retailers and their staff have been on the frontline as households prepare for an extended stay at home, with grocery sales amounting to £10.8 billion during the past four weeks alone — that’s even higher than levels seen at Christmas, the busiest time of year under normal circumstances.

“Growth has been primarily driven by people making additional shopping trips and buying slightly more, rather than a widespread increase in very large trolleys,” or shopping carts, full of purchases.

In the four days between March 16 and March 19, a Monday-through-Thursday span, 88% of households visited a grocer, making five trips on average — adding up to 42 million extra shopping trips in less than a week.

Read: U.K. grocer Sainsbury is placing big bets, and here’s how that could boost the stock

McKevitt said: “With restaurants and cafés now closed, none of us can eat meals on the go any longer and an extra 503 million meals, mainly lunches and snacks, will be prepared and eaten at home every week for the foreseeable future.

Those missing the pub have been stocking up on booze to recreate trips to their favorite haunts, some of them socializing with friends over apps like Houseparty and FaceTime. The Kantar data show alcohol sales were boosted by 22%, an additional £199 million, in the past month, as Brits hit the bottle .

Clive Black, an analyst at broker Shore Capital, warned: “With so much stocking up, consumption of filled-up larders and freezers is likely to lower near-term U.K. grocery demand.”

While the economic shadow of the coronavirus crisis could be long and dark, he offers some optimism: “From a relative perspective, that may enhance the attractiveness of the U.K. supermarkets as equity investment plays, as their defensiveness, free cash generation, liquidity and solvency shines through.”