Stocks are priced for perfection in an imperfect world

Stock markets around the world are flirting with all-time highs. In normal times, this would not be as dangerous as it is now.

Equities have drifted upward for decades in fits and starts. It is the natural order of things. For much of the post-World War II period, global growth supported that ascension.

Today, however, global growth is minuscule compared to the past 70 years. As I have discussed repeatedly in letters since 2009 and on MarketWatch since 2012, global demographics and accumulated debts are a headwind to sustained growth in most of the world. These are not problems that central bankers can fix by printing money or keeping interest rates near zero. Ultimately, equilibrium based on the complete set of global circumstances will need to be met.

To be sure, the money that central bankers have flooded the planet with has fought off a deflationary economic catastrophe. By employing "inflation targeting" these central bankers believe that they can also create growth. They are wrong. More money in the hands of relatively few investors will not create growth when standard-of-living concerns grip well over half of the global population, and most of those with assets would prefer to game financial markets than embark on real investment.

Stocks, from China to Germany to the U.S. are all priced now as if global growth were about to take off. While I believe we will eventually have a boom building the sustainable infrastructure we need to survive as a civilization, we are far from the consensus, leadership and fiscal resolve that we need to do that.

In coming quarters, global growth is unlikely to keep up with expanded price-to-earnings multiples on many stocks. As I suggested a few months ago and heard recently repeated, the multiple-expansion phase of the bull market is over. With growth not poised to leap forward, we are closing in on a correction.

While central banks might continue to accommodate — I don't put it past the Fed to flip flop and go from raising interest rates to more QE — it is only a matter of time before there is a reversion in stock prices that brings growth expectations back into line with price-to-earnings ratios.

The following chart is from the quantitative analyst I use. We have been following it for about a year now. It shows that the S&P 500 as measured by the SPDR ETF /zigman2/quotes/209901640/composite SPY +2.48%  has reached and sustained an overbought level not seen since just before the 2000 and 2008 crashes. We recently made this proprietary chart available to subscribers of Fundamental Trends investment letter and clients of my investment firm. We are sharing it here to hopefully prevent people from blindly throwing money into the markets at this juncture, i.e. through their 401(k) plans. 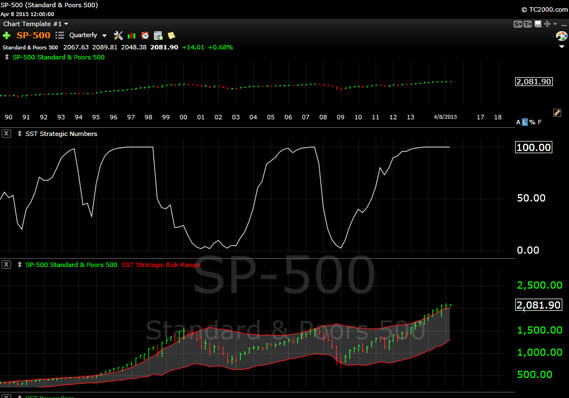 As I've mentioned in my three previous columns, I have started accumulating various put options on SPY because that is where earnings are most likely to suffer. So far, I have only hedged. I am not outright speculating on a deep correction. I have to keep in mind that markets can stay irrational a long time. Regardless, having some portfolio insurance seems like a better idea every day.

Disclosure: Kirk and certain clients of Bluemound Asset Management own puts on SPY. Kirk has also recommended SPY puts at his investment letter services for self-directed investors: Fundamental Trends and The American Resource Boom Letter. Neither Kirk nor Bluemound clients plan any transactions in the next three trading days. Opinions subject to change at any time without notice.